The Vampire: His Kith and Kin in Paperback Covers 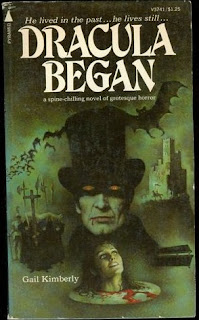 This cover for Dracula Began, a 1976 novel by Gail Kimberly, is stunning: you got Vincent Price from Tomb of Ligeia with misplaced eyes, big black bats, a Gothic castle, village people on the hunt, and a totally incongruous lady's head on a platter. Amazing. Artist George Ziel is a master of the vintage horror paperback cover! 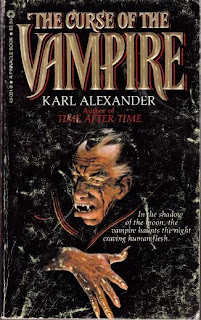 A repulsive old-man vampire adorns Karl Alexander's Curse of the Vampire from 1984. That certainly wouldn't work today, since we all know vampires now have perfect pouts and six-pack abs. 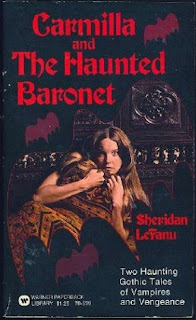 Ahh, I love this one! Le Fanu's 1872 classic Carmilla was reprinted in 1970 with this fantastic cover. Love the font, the woodwork, the frightened hippie chick cowering. Excellent! 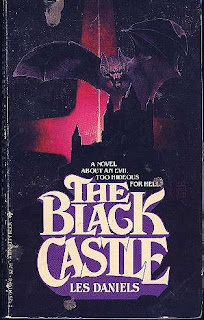 I've got a couple of the vampire novels by Les Daniels featuring the Spanish vampire Don Sebastian de Villanueva, but I haven't read them yet. The Black Castle from 1978 is simple and to the point. 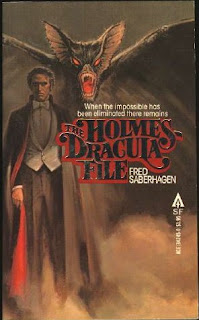 Traditional opera-cape-and-tux-clad Drac here, part of Fred Saberhagen's long-running Dracula novels. The Holmes-Dracula File, from 1982, is labeled "science fiction," which I find odd, since neither of those dudes fits in the genre. 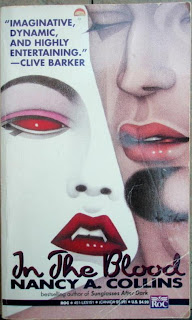 The first sequel to her Sunglasses After Dark, Nancy Collins's 1992 In the Blood continues the adventures of Sonja Blue, as well as again featuring the art of Mel Odom. 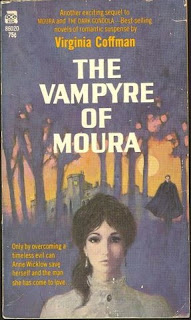 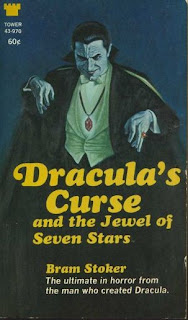 By-the-numbers rendering of Lugosi for a 1968 reprint of Bram Stoker's lesser-known works. 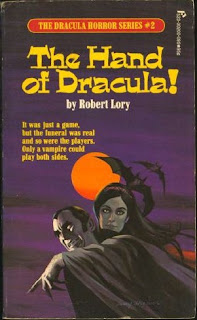 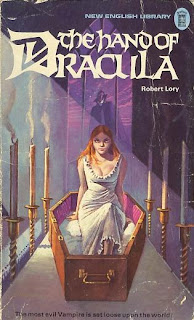 Groovy vintage Drac and his lady-fiend on the US cover of The Hand of Dracula! from 1977. I especially love the UK edition. Author Robert Lory put out a whole series of these modern Dracula adventures. 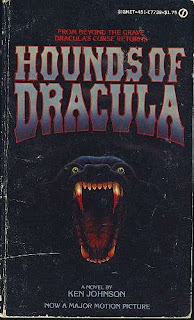 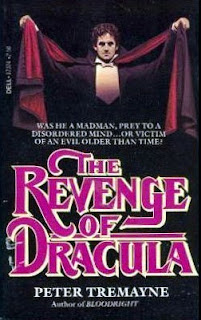 Peter Tremayne also wrote another Dracula novel, called Bloodright, and returned in 1978 with The Revenge of Dracula. Pretty standard, traditional image on this. Not sure about the blow-dried 'do, though. 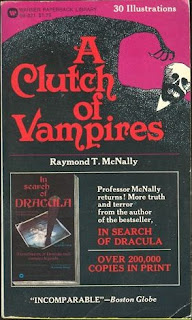 A murder of crows, a quiver of cobras, a streak of tigers... and A Clutch of Vampires (1974). Nice. I think that's an Edward Gorey illustration, don't you? Raymond T. McNally was the vampire expert of the '70s. 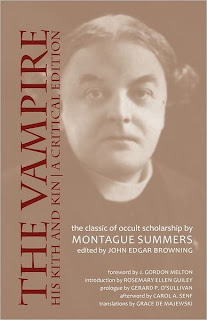 Montague Summers was an eccentric English clergyman-scholar who wrote several books on the occult - from the suspect point of view of a true believer - and his most famous was The Vampire: His Kith and Kin (1928). This is the 2011 edition.
Posted by Will Errickson at 4:35 PM

I have fond memories of "Dracula Began" and I absolutely loved that cover. It's long since been lost in one of many moves... I wonder if I would love the book as much now as I did back then? :)

Fantastic. I've got to read some of these.

That awesome DRACULA BEGAN cover is by an artist named George Zeil. Don't bother googling him, there's practically nothing about him on the internet. But if you want to see more of his stuff, do a google image search for " Gwen in Green", "R. Chetwynd-Hayes", " Mary Roberts Rinehart", "Ngaio Marsh", that'll get you off to a good start. As far as I can tell, he was active from the 50s through the early 80s -- even did the covers for four Chester Himes first editions for Avon, among others. Happy Hunting!

I've seen that GWEN IN GREEN cover... amazing stuff. Thanks for the info.

Pretty cool cover on Carmilla, though the scared hippy chick really doesn't do Le Fanu's story much justice. Who could ever really come close to Ingrid Pitt as Carmilla though, right?

I may be wrong but I think there have been a number of takes on the "Dracula's Dog" theme - hell, you might even be able to consider Lovecraft's "The Hound" a take on that idea. No comment on quality (beyond "The Hound" which is great), but that idea seems to have been done to undeath already.

love these book covers ...think they would look great on vintage tee's!