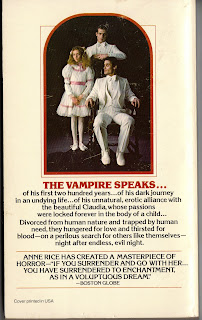 This is one of those horror paperbacks that began my obsession with, well, horror paperbacks. Another one of my recent finds from the used bookstore in South Jersey (a choice find too as I lost my copy of this edition many years ago), this May 1977 first mass market paperback of Anne Rice's influential Interview with the Vampire is luckily in excellent condition... and I think I paid $1.25 for it! 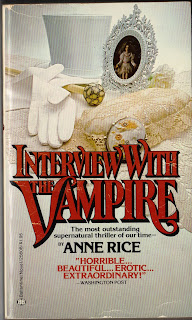 First time I saw it I must've been 9 or 10, wandering around in the library, when I saw the word "vampire" featured on its spine in the paperback racks. Upon picking it up I was nonplussed to find the elegant cover photo with everything in... white. That's not right, my monster-kid brain told me, Vampires always wear black! Little did I know that Rice was doing away with decades of Draculean lore. But it was obvious even then that the cover design was such so that it appealed to non-horror fans. I love it now: the three characters figured prominently, dressed to the nines (even if Lestat and Louis didn't exactly wear early 20th century dinner tuxes in the novel), beside their beloved Claudia, who's looking childlike and ancient at once. An immortal family portrait. Creep-ee.

Claudia and Lestat might hunt and seduce, stay long in the company of the doomed victim, enjoying the splendid humor in his unwitting friendship with death... 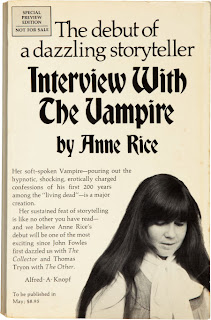 And... how about this pre-publication edition? Looking as she did then, how could Anne Rice have ever done anything but write something called Interview with the Vampire?
Posted by Will Errickson at 10:31 AM

Hey - if you'd like to get into a new extreme horror author - get in touch with sarantorchre@gmail.com - X

Thank you for all the wonderful posts. Here's an award. http://cathode13.blogspot.com/2011/08/awards-time.html

Thanks, Prof! I'm in good company there.

Awesome. I have this edition, too. Still a great read.

I must confess to having never finished an Anne Rice book. Started on a few, just lost interest. And the movie versions underwhelmed me.

You know, I really tried to love these books. I brought home the entire collection of Anne Rice novels before reading anything more than Belinda, assuming I would love the Vampire Chronicles just as much.
No dice.
I tried Interview With The Vampire followed by The Vampire Lestat, and neither one did it for me. So I stopped in hopes that one day down the line, I could pick up the Vampire Chronicles again and find myself riveted.
Well, here's hoping.

I liked 'em when I first read them like 20+ years ago but every glance at them since has been wildly irritating. Got this for cover art/condition alone - that's why there's no actual review!

i think I'm noticing a trend here? Could it be that we horror "purists" have no truck with the likes of Rice simply BECAUSE she tried to re-make/re-model? I dunno, frankly the vampire stories have never been my cup o tea in any author's hands. They dont scare me at all-and is now a modern cliche with the new proliferation. I did read IWAV when it came out in this cover. Hoping that al the hubbub would signify a new thrill. Unfortunately was never tempted to venture beyond that first book since I found it a slog to get through .