The Edge of Running Water by William Sloane (1939) 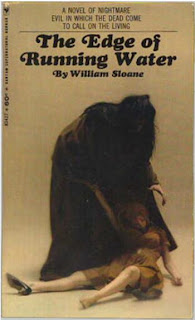 Dig this super-creepy cover! The little-known novel The Edge of Running Water was one of only two written by William Sloane, who was born on this day in 1906 (his other book, To Walk the Night, I featured here). It was chosen for Jones and Newman's Horror: Another 100 Best Books in 2005. The above edition is from Bantam Books, 1967. For an appreciation of Sloan, be sure to read this. The article's first paragraph is excellent:

Whenever a genre writer appears whose work even literary critics can't pretend they don't enjoy--someone like Raymond Chandler, Shirley Jackson, or Philip K. Dick--he or she is officially allowed to have "transcended the genre." There's something disingenuous and galling to the genre fan about this special dispensation, as though any work of crime, horror, or science fiction that's actually good must not, by definition, actually be crime or horror or science fiction. 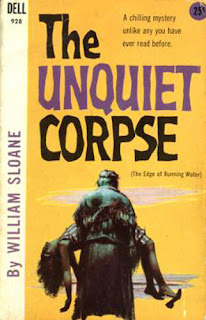 Posted by Will Errickson at 7:20 PM

I will have to check this out. Not sure how or when.

Ballantine/Del Rey reprinted both of these - with much more sedate covers - back in the late '70s, early '80s. They still show up occasionally.

Love that Bantam cover -- " super-creepy" indeed. Wish I knew who painted it.

"Edge" was filmed as " The Devil Commands", one of Karloff's string of " Mad Doctor" movies for Columbia (the best of that lot, by several miles).

Harlan Ellison once wrote about the novel (can't remember where, unfortunately) -- he'd loved the book in his youth, re-read it as an adult and found it didn't pack nearly the same punch.

Read it myself about ten years ago -- my opinion of it pretty much in line with "grown-up" Harlan's -- kinda slow, atmospheric, decent characterizations, etc, but never really "catches fire". My copy's that awesome Bantam edition, at least, so I'm hanging on to it :)

Fantastic cover for The Edge of Running Water and such a suggestive title as well. I'm tempted to say that it's by Jeff Jones but I doubt it. The color palette is also suggestive of James Bama but again, I'm not quite sure.
Thanks for the article link, I had never heard of William Sloane but I'll keep a lookout if any of his two books should cross my path.

It had occurred to me too that it might be Bama -- he did tons of work for Bantam in that period, of course, across all genres. As you noted, that muted monochromatic color scheme is very much the kind of thing he often used in his work. Plus, the lighting, that subtle soft-edged shadowing technique --- hhmmmmm....

Anyone know if there's a Bama checklist available anywhere? On-line or otherwise?

Definitely think it's not the late Mr. Jones. His stuff was never quite that photo-realistic. Also, I could be mistaken, but I'm pretty sure this one pre-dates Jones' advent as a professional. But I can certainly see why you might think it could be him -- something about that misty, dreamy quality.

I didn't know he'd done the Aurora monster model boxes! Says he did "hundreds" of paperback covers for Bantam...

Loved Bama's Doc Savage covers; they drew me to the books in my teens.

Sloan was from Maine, apparently, or at least lived here. I've been turned on to him by a bookseller well-versed in horror, and look forward to reading both books. I've managed to scrounge up copies, one from Bantam circa early 60s, one circa early 80s.

I've got this book (in hardback, so I don't have the cool cover) but haven't read it yet. Read _To Walk The Night_ and liked that one a good bit, though. Now that I see the paperback cover I'm even more amped about reading it. :)

nice to see Sloane getting a little love--amazing cover, too! I had an old hardbk library copy, nothing on the cover but dust

I kind of dig this UK Panther cover. Not as much as the Bantam but cool, nonetheless.

OK, sorry for the double-post and poss. tangent..but these Bama-Savage Fantasy covers are rather fun. I'll shut the door quietly now.
http://www.miscmayhemprods.com/doc/

YEAH! These covers 'are' cheesy! They're great! The Edge Of The Water book just looks plain weird. Is the book good? I might check look for it on Amazon (guessing it's out of print because it's old).xoxo

Great Book & one of my favorite covers ever-Unk

Just found this in my local used paperback shop for a buck-fifty. Gonna read the hell out of it soon!