The Dark Country by Dennis Etchison (1982): Nightmares Stay with You 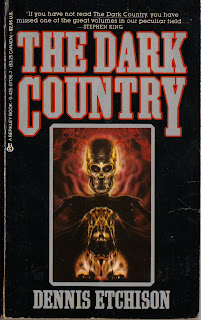 For some time I've been searching for a copy of Dennis Etchison's first collection of short fiction, entitled The Dark Country. Finally found it on my recent trip to my hometown! Originally published by specialty publisher Scream/Press, this paperback is from Berkley in 1984. It consists of Etchison's stories from the 1970s, and his World Fantasy Award-winning 1981 title tale. Like Stephen King, Etchison had many of his short works appear in men's magazines of the day, as well as various anthologies edited by Charles L. Grant and Kirby McCauley. Interestingly, for an author so associated with the horror genre, lots of his stories here could be classified as crime noir and science fiction rather than supernatural horror. Perhaps they all fall under the never-clear "dark fantasy" tag which Grant touted.

But this is all academic: what's important is that Etchison's stories are crafted with a true writer's care and originality, although at times his penchant for experimentation and quiet intimation can lose even careful readers. Like me. Therefore I suppose you won't be surprised to learn that one Ramsey Campbell introduces The Dark Country... 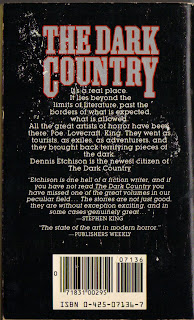 A California son, Etchison often sets his fictions in the desert highways and late-night byways of his home state; he knows well this empty land and the darknesses therein. "The Late Shift," one of his more well-known works that was first published in the seminal Dark Forces (1980), reveals a sinister source for those poor souls working the graveyard shift in 7-11s and gas stations and diners throughout that region. I adored "Daughter of the Golden West," which begins as a Bradbury-esque fantasy of three college-age men (the collection is dedicated to Bradbury) and ends with a revelation of one of California's greatest tragedies. Reading the noir-ish "The Walking Man" put me in mind of the spectacular "modern" noir film Body Heat (1981) and once again shows how the horror and crime genres uneasily shadow one another. 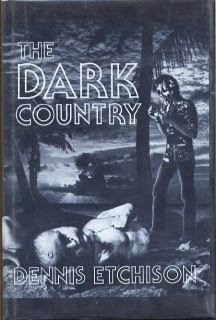 The maddeningly enigmatic "You Can Go Now" finishes without wrapping and bow but I found its dream-like, episodic psychological structure utterly intriguing. Chilling, sad, realistic stuff... even if perhaps it doesn't quite come together. "Calling All Monsters," "The Dead Line," and "The Machine Demands a Sacrific" form what Campbell calls the "transplant trilogy... one of the most chilling achievements in contemporary horror." Blurring SF and horror in a vaguely Ellisonian manner, Etchison offhandedly imagines a future (?) of living bodies at the service of some (mad) science, evoking Moreau's House of Pain. The breaking mind of a man in extremis:

O now the obscene sucking sound growing fainter even as my hearing dissolves, wet tissue pulling apart. They suction my blood, the incision clamped wide like another mouth a monstrous Caesarean and I hear the shiny scissors clipping tissues clipping fat, the automated scalpels striking tictactoe on my torso and i know they are taking me, the blood in my head tingles draining down down and I am almost gone, O what are they doing to me the monsters ME they must be it can't be that other... I have seen the altered specimen on the table the wrapped composite the sutured One Who Waits drifting in fluid for the new brain the shaved skin the transplanted claws the feral rictus the excised hump 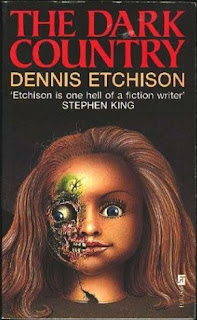 Others: I didn't have much for "The Nighthawk," a gothic-y tale of siblings on the rainy California coast, nor "Deathtracks." Writing's good, stories not so much. The first story, "It Only Comes out at Night," despite its generic title, is a nice little traditional horror piece, as is "Today's Special." The frigid vengeance of "We Have All Been Here Before" and especially "The Pitch" is quite satisfyingly nasty. Etchison has a skill for diversion, letting you think a story going's one way when - record scratch - it goes somewhere else. 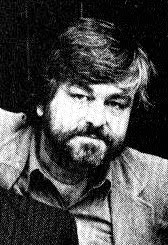 Now, on to the award-winning title story. Nothing SF or noir or supernatural about this piece at all; it reads more like an autobiographical piece (the protagonist's name is Jack Martin, Etchison's pseudonym) of an inadvertently nightmarish vacation. His friends callously and drunkenly exploit locals at a Mexican beach resort, then he's forced to face a fate dealt at random. This is not the kind of story you expect to find in a book with the little "HORROR" label on its spine. Does that matter? I still don't know. Somewhere Martin/Etchison wait, probably not knowing either, hoping... but fearing, as always, the worst. 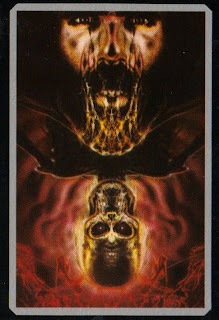 I owned that Scream Press edition, bought and signed by Etchison at the 1982 World Fantasy Convention. Sold it in the late 90s when I was moving to L.A., which I now regret.

Here is a list of special-press/limited editions I have had to sell in the past:

and SILVER SCREAM and one of the NIGHT VISIONS series from Dark Harvest...

Will, I had a few of the original Dark Visions volumes. I sold a lot of stuff off in 1996 for the move, which I now kick myself for. Even a first printing of Kirby Macauley's Dark Forces is worth something these days. Oh well, hindsight is the best sight.

Wow, sounds an interesting collection - I've read a couple of his in anthologies but never an entire book of his.

(Nice blog by the way - found my way hear from the Books Of Horror forum...)

Nice review. I don't own this, but I do have his collection Red Dreams (1984). "Enigmatic" is appropriate...

James, glad you stopped by. I'd read a handful of the stories in this collection over the years in other anthologies, but it was great to get some I'd missed, or were original to DARK COUNTRY.

Doc, I had RED DREAMS in high school and must confess it was a bit too "enigmatic" for me as a teenager. On the lookout for it again though!

Also, nice to see one of those rare blurbs from King that meant something more than "Yeah, yeah, it's me, now just buy this piece of crap and forget all about it."

Great review. And thank you for pointing out that there does not seem to be anything "horror"-ish about the title story. I've puzzled over that a bit, though I've only read the story once.
By the way, your blog is bad for my wallet, goddammit... (Amazon thanks you.)

A fine collection and a terrific review.

I had this one but aside from the story about the roadside rest-stop, none of them made enough impression on me. But now you've made me curious about that title story at least...dang! I don't have the book anymore.