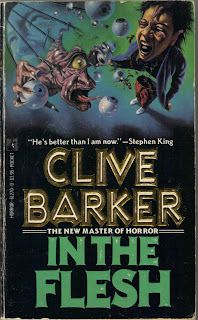 But then monsters were seldom very terrible once hauled into the plain light of day...

Four more stories of challenging, thoughtful horror in which our bodies and our world are transformed in ever more complex and illuminating ways. This penultimate volume of the Books of Blood, his famous series of short horror fiction, finds Clive Barker diving deep into the subconscious myth-pool and coming up with more utterly fantastic tales: of crime and punishment in "In the Flesh," of gender fluidity in "The Madonna," of the insane vagaries of international politics in "Babel's Children," and perhaps most famously, of the fearsome legends we pass on to one another in "The Forbidden" (the basis for the 1992 horror movie Candyman). Sound good? Of course it does. 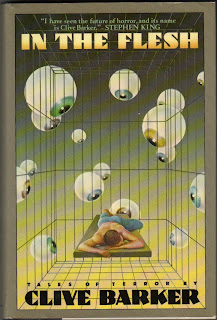 Like its companion The Inhuman Condition, which was originally simply titled Books of Blood Volume IV in the UK, Volume V was retitled after one of its stories when published in the US in hardcover in 1986 and a Pocket Books paperback in 1988; it became In the Flesh (with cover art by Jim Warren). As the volumes went on, Barker’s strengths as a writer grew; the long stories here - the longest of any volume in Blood, each over 50 pages - allow some of his strongest, most evocative prose to shine and features some of his most thematically potent imaginings. This is metaphor made flesh at its finest, most realized, most satisfying. My review could be double its length, such is my admiration for Barker and these tales! Invention, boldness, terror, eroticism, and yes, self-knowledge await... 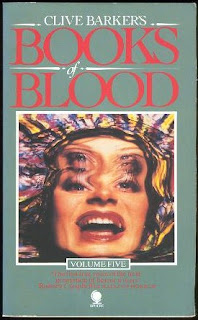 The title story is an ironic rumination on sin - or, if you prefer, "sin" - within the walls and bars of a prison. Young Tait might look like fresh fish to his new fellow inmates, but his forebears are of stronger stuff: his grandfather, known as Saint Tait, hanged for murdering his family; all of them, except his daughter, who would grow up to birth Tait the younger. Sharing a cell with petty experienced thief Cleve, Tait slowly reveals the shadows of his truest self and a dream-city which, despite its appearance of vacancy, houses the worst of humanity. Cleve wants to know (as do all of Barker's heroes): Why? Why does Tait call upon the rotting shade of his grandfather and allow himself to be transformed painfully? Tait's answer is chilling in its simplicity: "To be not myself; to be smoke and shadow. To be something terrible." 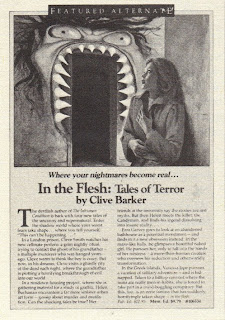 "The Forbidden" is like the best Ramsey Campbell story you’ll ever read. One of urban destitution and a dilettante intruder who seeks to intellectualize the vulgar graffiti of a rundown, crime-ridden housing estate, it evokes Barker's fellow Liverpudlian but is still distinctly his own. It is also, quietly, unobtrusively, about the “pleasures” of horror itself: of the stories we tell solely to chill the blood but ultimately to familiarize ourselves with our final ends. We are drawn to it, no matter who disdains us. Myths and legends live, literally live, Barker shows, and when they step from shadow, we must be ready to meet them. Filled with passages and ideas I must refrain from quoting at length, this is surely one of Barker's best works. Was there a place, however small, reserved in every heart for the monstrous? 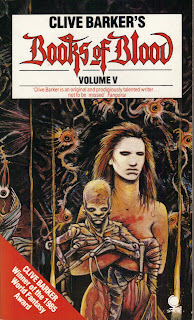 In Barker's own illustration for the cover of the UK paperback of Vol. V, you'll see"The Madonna." This story is ripe to bursting with Jungian imagery of feminine fecundity, pools of water, sucking vortices and suckling babes (part squid, part shorn lamb), and prefigures part of the climax for his magnum opus Imajica (1991). Two business-criminal men lost in a labyrinth of an abandoned health spa, and the wet, shimmering female wonders at its center. Barker's talent is to subvert notions of normalcy and reveal unseen truths: There were miracles in the world! Forces that could turn flesh inside out without drawing blood; that could topple the tyranny of the real and make play in its rubble. 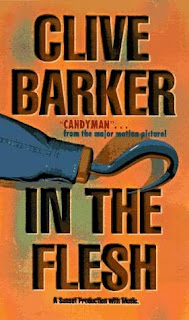 And last, "Babel's Children" is unclassifiable; like his earlier "In the Hills, the Cities," it's an example of his ability to meld the sublime and the ridiculous slyly, ironically. Vacation-adventurer Veronica, lost in the scrub of a Greek isle, comes upon a sort of monastery for the mad, and finds the entire world owes all to it. And if - as her dizzied mind had concluded - these were creatures as sane as herself, then what of the tale that Mr. Gomm had told? Was that true too? Was it possible that Armageddon had been kept at bay by these few giggling geriatrics?

The Pocket Books edition at the top has a surreal cover painted by Jim Warren; look again after reading and you'll see those grotesqueries spring from the pages themselves. Don't wanna spoil any for you but one: the eyeball impaled by a knife, a piece of graffiti art from "The Forbidden" that would please a Dali or Cocteau or Breton: Close by was an image of intercourse so brutally reduced that at first Helen took it to illustrate a knife plunging into a sightless eye. 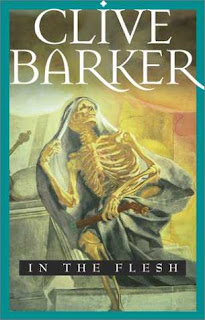 Having not read In the Flesh for some many years (it's another book I clearly remember reading in high school classes instead of doing schoolwork), I was thrilled upon returning to find them as fresh and effective as ever; the years have not dulled their ability to chill, to amaze, to repulse, to provoke. Barker was certainly in a class by himself; as I’ve been reading and rereading all this horror fiction from that era I can easily see why everyone was so taken with him: the high caliber and unexpected elegance of his writing and his boundless imagination that left nothing to the imagination are simply greater than almost anyone writing at that time. His towering conceptual powers have few equals. He still ranks as one of my all-time favorite writers, horror or not. Whichever way you refer to it, In the Flesh or Books of Blood Vol. V, Clive Barker has provided us with yet another collection of essential horror fiction. 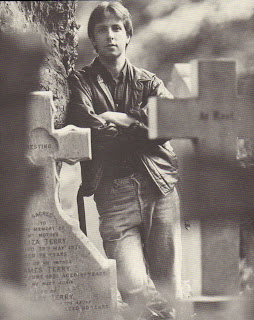 Posted by Will Errickson at 3:59 PM

Another excellent review. He was certainly the finest exponent of overt, graphic, almost expressionistic horror style I can think of, pre-emptively rendering the whole "Splatterpunk" concept obsolete, and a sort of flipside to the relatively restrained (but equally essential, to my mind) stylings of Grant and Campbell and the rest of the Shadows crowd.

I have to say, though, I haven't had much success with his longer-form work. The Damnation Game, in particular, proved something of a chore. Picked up a used copy recently, and took it straight back to exchange it once I'd finally got through it. Maybe it was just a "first novel" thing, but it didn't exactly get me excited to read Weaveworld or anything else he did later.

Love that B&W illustration of "Forbidden" above. Where is that from?

I scanned the B&W illo from SHADOWS IN EDEN, an amazing book on Barker from '91. I believe it's from the Book of the Month Club catalog.

Never had a problem with Barker's novels. Read DG a few times right after it came out and enjoyed, loved everything up to COLDHEART CANYON. Indeed, IMAJICA is one of my favorite books of all time.

These stories are actually less graphic than the earlier stories, but his writing is just captivating...

Had all the Books of Blood in their original US paperback versions. Wonderful stuff. Liked "The Damnation Game", LOVED "Weaveworld". He lost me since "The Great and Secret Show", though. All his books began reading like film treatments instead of novels. I need to go back and re-read "Weaveworld", though.

Good review thanks; I don't think he's ever topped The Books Of Blood stories to be honest.

If anything I think CABAL could be seen as a film treatment, maybe HELLBOUND HEART too, but I can't see how the epic pages of IMAJICA or EVERVILLE could. Barker has been saying *for years* that WEAVEWORLD is gonna be some cable TV movie but I hope not!

CABAL was made into "Nightbreed", right?

Yeah, that's the one.