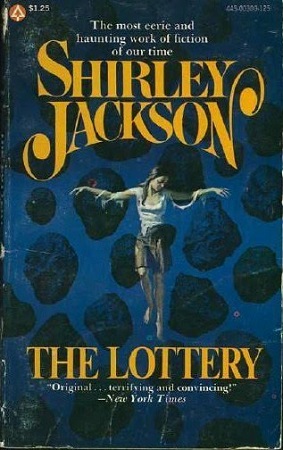 Before there was The Bad Seed or Damien, there was "Charles."

The esteemed Shirley Jackson's other famous short story, "Charles" first appeared in the fancy ladies' magazine Mademoiselle in the summer of 1948. It was next included in her landmark short story collection the following year, titled The Lottery: The Adventures of James Harris, and most likely has never been out of print; it is taught in schools to this day—which is not any way I'd like people to be introduced to this story. Like most good things, "Charles" deserves its own special discovery. 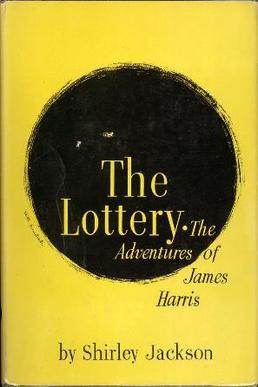 I can't recall when or how I first read "Charles," but I was a teenager, so that was some decades ago. I've always remembered that frisson of the ending, and the final sentence is a perfect one, upending everything that has come before, adding an unexpected darkness to what had seemed to be a sly, almost whimsical tale of the domestic (Jackson was also famous for her wryly observed stories of her home life, like in Raising Demons, seen below in a 1970s reprint). 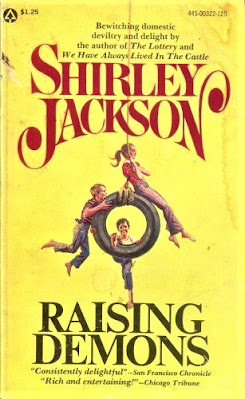 Every day young little Laurie heads off to kindergarten on his own, "a swaggering character," and when he returns, regales his bemused mother and father about a classmate named Charles and his unpleasant antics: first Charles uses the Lord's name in vain, then hits the teacher, then bounces the playground seesaw off a girl's head, and more; he even becomes a kiss-ass while other kids get in trouble for things he goads them into doing. Laurie misbehaves more at home, in charming child-like ways, and the name Charles itself even becomes an in-joke whenever a family member makes a mess (akin to something "Britta-d" on "Community"). 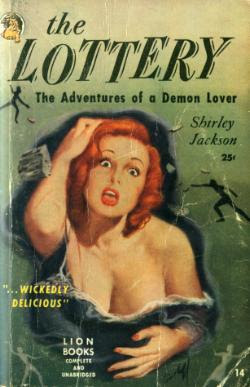 First paperback, 1950, with a more enticing cover and subtitle

Spoiler! Gonna talk about the ending. The parents aren't too upset hearing about Charles's misbehavior, but the upcoming PTA meeting has them both intrigued: perhaps now they can meet the mother of this tiny terrorizer! Mother goes alone while Father suggests inviting the woman home for tea with them after. But at the meeting she sees no woman that looks "haggard enough" to be the boy's parent. She sidles up to the teacher and begins to chat with her, and then finds out the truth: there is no Charles in the class. 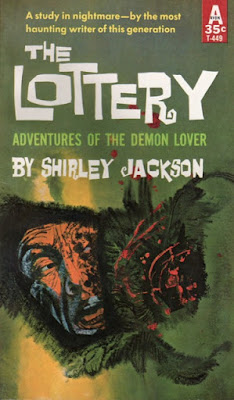 1960 Avon reprint
Spoiler cont. This revelation may be open to some interpretation, since Jackson, as is her wont, has laced the story with notes of ambiguity (the whole class staying after school for Charles's misdeeds is a clue). But I've always, since the first, taken it to mean that Laurie is the terrible tyke, and has created the persona of "Charles" to separate himself from his evil behavior and avoid being punished by his parents. What a perfect little devil! 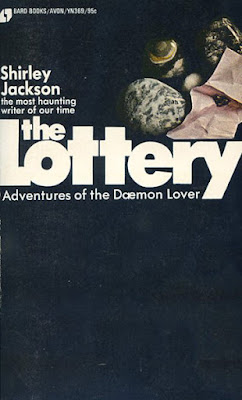 1971 Bart paperback reprint
While "Charles" is not a "horror story" per se, that final line's ability to cast everything before it with a deeply unsettling truth would become a staple of the genre, and Jackson's expert deployment of this tactic should be a beacon to any horror writer worth their salt. "Charles" is simply a must-read. 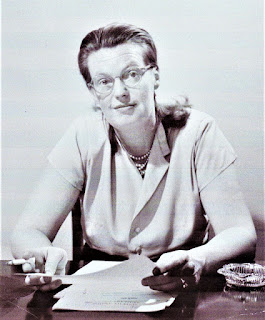 Posted by Will Errickson at 2:16 PM

Shirley Jackson was a national treasure. The opening paragraph of The Haunting of Hill House is a strong contender for the best opening paragraph of any American novel, and that's hardly hyperbole (nor am I alone in that opinion; entire essays have been written defending that proposition).

I recently had the opportunity to pick up a recent edition of The Lottery and Other Stories (a.k.a. The Lottery--The Adventures of James Harris). Some of the stories are ones I've read before and some are new to me. "Charles" was a little of both, one I remembered previously reading and remembered the ending of midway through, a realization that did absolutely nothing to diminish the story or its effectiveness. It's brilliant, just brilliant.

(By the way, the teacher's reaction to the narrator upon her introduction as Laurie's mother gives, I think, another (and very funny!) clue to resolving the ambiguity.)

I'm more than midway through the read/reread, and have to add that "Flower Garden," a story with no supernatural, ambiguous, or mysterious events in it may be the most horrific story in the book so far. And in such an unpleasantly genteel way. It's a story that I wish was a historic curio, instead of one that seems depressingly relevant in our current era. It's a beautiful, sad, cringe-inducing page-turner of a story, that one.

Thank you for the post, and for the blog. I'm often a lurker and rarely a commenter, but how can I pass the chance to gush about Shirley Jackson?

I'm reading Haunting of Hill House right now for the first time ever! I am falling in love with her style and characters. Can't wait to discover some more of her short fiction in time. Loved the post!

My reaction to "Charles" was also that it was creepy and kind of a "Norman Bates blames everything on 'Mother'" sort of psychological twist... and then I started researching it and found that most people find it comedic, that it's supposed to be funny. And I can see how it could be taken that way, but, I dunno, I still got a bit of a chill from it. Shirley Jackson did write a lot of humor stories, too, so it'd be interesting to see what her intention was: laughs or creeps?

@Zwolf: I doubt she would've thought the laughs and creeps are mutually exclusive; Jackson had a wonderfully morbid sense of humor. And not just in her short stories: for example, We Have Always Lived In The Castle begins with the narrator coming across as a wickedly funny character until things spiral further and further out of control, and more and more layers of what's happened are exposed, and you realize just how dark and awful the situation really is.

In film there's an idea that comedy and horror are very closely related genres because they both rely on timing, and this is the reason that directors and writers who are very good at one frequently prove to be very good at the other. I wonder if something similar can be said for prose?

From the fact that "Charles" is incorporated into the first of her family humor books (Life Among the Savages), I think her primary intention was laughs. But it is interesting how, as people have said, it can be read either way depending on context; which I think points how close humor and horror are, how similarly they function, with that point of frisson that is essential to both.

The last time or two I reread The Haunting of Hill House -- when perhaps the impact of the scares (which are admittedly peerless) had faded just a little -- I found it much funnier than is generally discussed. There's a definite shift in tone in the middle, with the arrival of the doctor's oblivious wife and her companion, but there's a lot of archness even in the first half. Mrs. Dudley could be played for straight-up comedy without changing a word of her dialogue!

Our teacher in Grade 3 or 4 read "Charles" to the class. (this would have been 1970, I think) When she got to the last line, there was kind of a gleeful reaction, as everyone went "Ohhhhh!"

Eric--thank you! And it seems Jackson's stature is only growing and growing...

Jackson definitely has a black and bleak streak of humor in her work that sometimes goes overlooked (especially if folks are unaware of her domestic tales based on her own children). I'd forgotten all about the humor in that latter half of HILL HOUSE when I reread it a couple years ago (the original film is probably responsible for that).

Thanks for reading, everyone! So much to discuss about Jackson's work...

Jackson,Bradbury and Matheson were my first horror binge/loves when i was in 7th grade I made it a point to find all of their works and plow through them. tHoHH is probably one of my favorite re-readable novels of all times. And that opening/closing paragraph...genius! I can repeat it verbatum from memory. Pure Poetry.