Favorite Horror Stories: "His Mouth Will Taste of Wormwood" (1990) 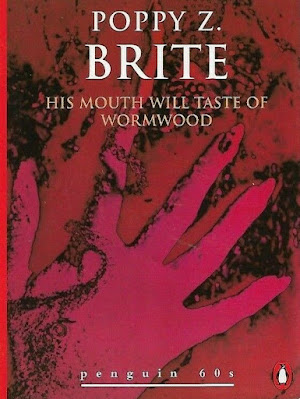 Few writers in horror during the genre's Eighties heyday had a knack for writing about people who lived in any kind of minority subculture, whether ethnic or artistic. How could it be otherwise? Horror was mainstream, horror was marketed towards middle America, and for the most part espoused those middle American values and identities. It wasn’t really till Clive Barker that horror fiction acknowledged, if not outright embraced, these "alternative lifestyles." A few short years later it was Poppy Z. Brite who wrote fiction composed almost solely of young outcasts, usually gay or bisexual young men, often musicians or artists, living in the demimonde of several intersectional non-mainstream cultures.
Arriving on the scene after publishing a smattering of short works in various horror magazines, with blurbs attesting to greatness by the likes of Harlan Ellison and Dan Simmons, Brite published two novels with Dell Abyss and a third after the Abyss line folded, then seemed to ease away from the genre, returning only within the last decade a transman named Billy Martin; Brite is still however the name he uses professionally. 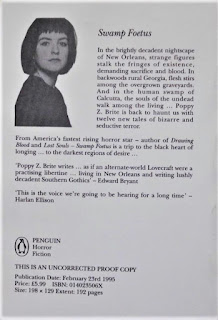 Brite's specialty was adding a fresh flavor of doomed romance to various well-known horror scenarios. Gothic, but not in the sense of night-gowned women running from castles, but in the aesthete, decadent, libertine sense of Wilde, Beardsley, Baudelaire, Klimt, Rocky Horror, Siouxsie and the Banshees. Jaded, plagued by ennui, even if it was mostly a pose, these characters were arty, amoral teens and college-age kids hanging out in filthy ill-lit nightclubs, wearing skin-tight black, Doc Martens, funeral priestly collars, and smudged eye makeup. Established horror writers were old and boring, they wrote about the kids’ parents dealing with demons and rising property taxes. Writers like that wouldn’t be out drinking and clubbing till 4am listening to Bauhaus and Christian Death, chain-smoking, drugging, fucking (and then, since many of Brite’s stories were set in North Carolina, eating at Waffle House). 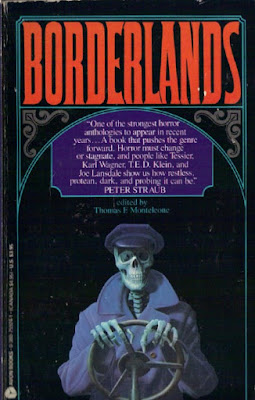 Thirty years ago, I was knocked out when I read Brite’s 1990 tale, “His Mouth Will Taste of Wormwood.” First published in an essential, groundbreaking original anthology of the era, Thomas Monteleone's Borderlands, it exemplifies Brite’s worldview and artistic mien from the first sentence: “To the treasure and the pleasures of the grave,” said my friend Louis, and raised the goblet of absinthe to me in drunken benediction. As I read, the story seemed vaguely familiar—oh, yes, it's a retelling of Lovecraft's “The Hound,” one of his non-mythos works that showcased his (intellectual only!) love for overripe, purple decadence. Brilliantly, Brite updated the setting and our "protagonists" are now two macabre-minded young men of the 1980s who live in a home decorated like, perhaps, an Edward Gorey illustration. 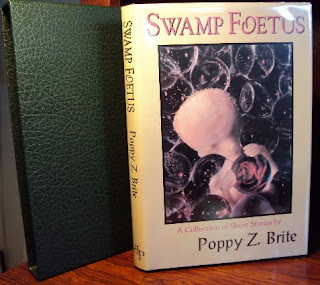 Evoking a Goth version of Withnail and I, these guys are “dreamers of a dark and restless sort.” They live in orphaned Louis’s “ancestral home in Baton Rouge… on the edge of a vast swamp, the plantation house loom[ing] sepulchrally out of the gloom that surrounded it always.” Striving for the extremes of experience, a sort Blakean “road of excess,” or maybe just good ol’ sex, drugs, and rock’n’roll salvation, they search in vain:

Both of us were dissatisfied with everything. We drank straight whiskey and declared it too weak. We took strange drugs, but the visions they brought us were of emptiness, mindless, slow decay. The books we read were dull… the music we heard was never loud enough, never harsh enough to stir us… For all the impression the world made upon us, our eyes might have dead black holes in our heads. 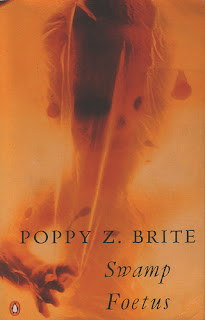 Brite's first collection of stories, Penguin UK, mid 1990s?
These jaded fops of the nighttime world seem lost, about to waste away, when Louis suggests an ultimate transgression: grave-robbing. How charmingly quaint! Their grave-robbing booty becomes a monstrous museum:

We always returned home with crates full of things no man had been meant to possess. We head of a girl with violet eyes who had died in some distant town; not seven days later we had those eyes in an ornate cut-glass jar, pickled in formaldehyde… we scraped bone dust and nitre from the bottoms of ancient coffins; we stole the barely withered heads and hands of children fresh in their graves… I had not taken seriously Louis’s talk of making love in a charnel-house—but neither had I reckoned on the pleasure he could inflict with a femur dipped in rose-scented oil.

What transpires after the two acquire a voodoo fetish (“a polished sliver of bone, or a tooth, but what fang could have been so long, so sleekly honed, and still have somehow retained the look of a human tooth?”) is almost beside the point; Brite is less interested in the way of plot or narrative than in weird flights of atmospheric prose and darkened vibes that go on for days: the lushness, the eroticization of every aspect of the environs, is Brite’s raison d’etre. Sex and death intermingle like the elemental forces they are, lusty and deranged beneath a cool, composed exterior. In his prose there whispers not only the archaisms of Lovecraft, but the pulp poetry of Bradbury, the slick sensuality of Anne Rice, the transgressive sex acts of William Burroughs. Brite slowly envelopes the reader in a cloak of lush midnight velvet, a world beyond the good and evil forces that the horror genre obliviously fooled itself with. 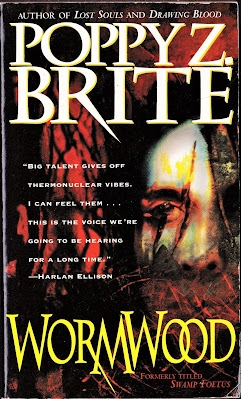 “His Mouth Will Taste of Wormwood” hit me in the solar plexus, quenching a thirst I’d only just begun to have, and making me hate living my small culture-less New Jersey town even more. I was thrilled to read about a subculture I felt a kinship with. Few horror stories affected me like this, combining the familiar horror stylings I loved with characters that weren’t so far removed from myself in a world I was eager to engage in. And Poppy Z. Brite was already there, lighting the candles, showing the way, serving the absinthe.

Postscript: I debated between writing about this story and 1992's “Calcutta, Lord of Nerves,” from Still Dead. The latter story I may like even more, is even more accomplished in its beautiful, nightmarish visions, but “Wormwood” was the very first Brite I read, so I opted to revisit that experience. Read my review of the collection Wormwood (originally titled Swamp Foetus), which includes both stories, and others, all excellent.

So, I like the new website design, black text on white background. Much easier on the eyes of the Elderly, whose ranks I soon am joining......sigh......