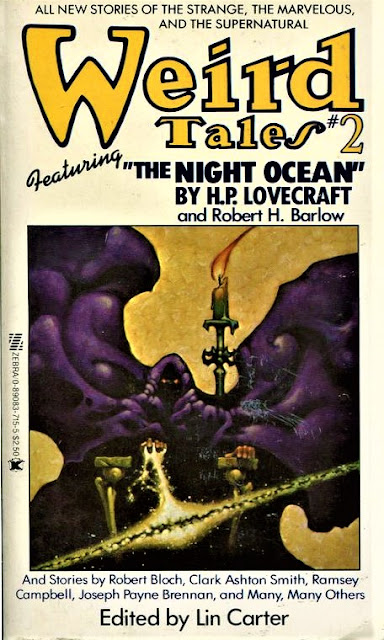 I believe it's common knowledge among fans of weird horror fiction that H.P. Lovecraft spent an inordinate amount of time writing letters, collaborating with other writers, and revising/editing their in-progress works. In 1936, they year before his death, Lovecraft assisted with the manuscript of his friend, young R.H. Barlow (1918-1951), a budding writer who entered the fabled "Lovecraft Circle" when he was only 13. Barlow, who later became a respected anthropologist specializing in early Mexican history, would take his own life when a student cruelly threatened to expose Barlow's homosexuality. 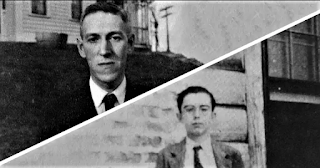 "The Night Ocean" is a perfect example of what weird fiction is, can be, and should do, a bridge between the work of an old master like Algernon Blackwood and future authors such as Thomas Ligotti and Ramsey Campbell. Noted HPL scholar S.T. Joshi has stated that the finished work is 90% Barlow's, although I think often it was attributed solely to Lovecraft. It was the last piece of fiction Lovecraft worked on, and was first published in a magazine called "The Californian" in 1936. Much later it was included in Arkham House's 1970 collection of Lovecraft's collaborations and revisions, The Horror in the Museum (it was the last story, deemed worthy of the buildup). In 1980 it was included in the Zebra paperback Weird Tales #2, as you can see at top; Necronomicon Press issued a chapbook of it in 1986, while I myself only read it for the first time in 2012, and it has lingered in my mind ever since. I've read little else like it. 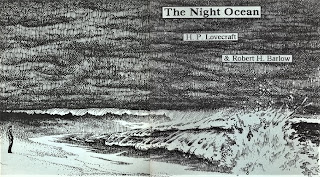 After a period of arduous creative activity, a painter, our nameless narrator, sets off to the beach near the town of Ellston for a respite in a somewhat remote little cabin on a lonely stretch of seaside. A solitary sort, he long ponders the failure of imagination to recount our past and the influence of locale and psychological state on individual human feeling, and our inability to capture our inward visions: "Set a pen to a dream, and the colour drains from it." His tendency towards introspection is engaged more and more in proximity to the rolling sea, which hearkens back to humanity's first days, and he witnesses "a myriad of ocean moods." The sun, the clouds, the shimmering light, the morning mist, the lace of sea foam, all of these things affect him, but it is "the ocean which ruled my life during the whole of that late summer."

A series of drownings occur, and of course our guy begins to ruminate upon what the sea hides in its dreadful brooding depths, knowing that no sharks patrol these waters:


The people who died—some of them swimmers of a skill beyond the average—sometimes not found until many days had elapsed, and the hideous vengeance of the deep had scourged their rotten bodies. It was as if the sea had dragged them into a chasm-lair, and had mulled about in the darkness until, satisfied that they were no longer of any use, she had floated them ashore in a ghastly state. 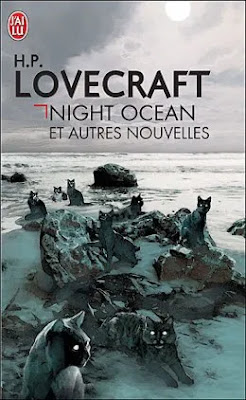 Descriptions of the night-time filtering through into the day, causing a grey pall over the landscape, are unsettling; our preternaturally perceptive protagonist observes that "the beach was a prisoner in a hueless vault for hours at a time, as if something of the night were welling into other hours." Nothing creeps me out more than that in-between time of certain moments of dusk or dawn, and now the whole area is cast in that light? *shiver* But it's more than that:
There was an alien presence about the place: a spirit, a mood, an impression that came from the surging wind, the gigantic sky, and that sea which drooled blackening waves upon a beach grown abruptly strange... a loneliness crept upon me... made subtly horrible by intimations of some animation or sentience preventing me from being wholly alone.
Vague as it may be, something is happening: a strangely carved metal bead found washed up on shore; figures cavorting one rainy night outside the house who freeze with "cryptic blankness... in the morbid sunset" when our narrator waves at them to come in from the downpour. When he looks out the window, they are gone. And what of the foul, decaying thing that is bandied about in the surf the next morning? He is offended by "the presence of such an object amid the apparent beauty of the clean beach," but knows intuitively that "it was horribly typical of the indifference of death in a nature which mingles rottenness with beauty, and perhaps loves the former more." 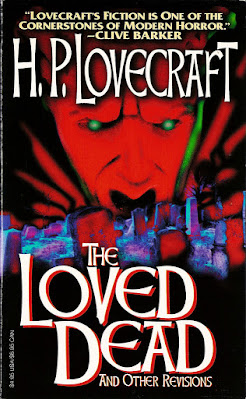 The atmosphere grows progressively darker from here, as he puts together the drownings and the thing in the surf and a "perception of the brief hideousness and underlying filth of life." This shit is getting to him, and it might be a good time to head on out of Ellston Beach. But not before one final glimpse of something "which ventured close to man's haunts and lurked cautiously just beyond the edge of the known..."
At times the narrator overindulges in his moodiness, as amorphous images, observations, and feelings tumble over one another in a manner that may slow some readers; I certainly had to take a break here and there. But the cumulative effect of Barlow's careful observations cannot be dismissed or ignored: "The Night Ocean" is a powerful work of eerie suggestion, of the supernatural qualities that lurk in various aspects of our natural world, of a reality beyond human ken that affords us a momentary glance at its incomprehensible secrets, something like the call of the void, "an ecstasy akin to fear." I feel as though Lovecraft may have inserted very subtle allusions to Innsmouth and the Deep Ones (the carven metal bead, odd figures emerging from the waves, and more) into Barlow's poetic, philosophical treatise on insignificance, which the unknowable sea appears to represent. Knowing that Barlow would kill himself lends a real poignancy to passages like this:
I felt, in brief agonies of disillusionment, the gigantic blackness of this overwhelming universe, in which my days and the days of my race were as nothing to the shattered stars; a universe in which each action is vain and even the emotion of grief a wasted thing.
Barlow reaches for and achieves, I believe, a secular, sermon-like quality as he wraps up his tale, a drawing together of experience and emotion into a solemn whole of profound insight into the human condition... yet is aware that he can never truly capture in these "scribbled pages" what has happened to him. Awed and humbled before an oceanic universe, as this circle closes, he can only offer, and take refuge in, the balm of nothingness.
Vast and lonely is the ocean, and even as all things came from it, so shall they return thereto. In the shrouded depths of time none shall reign upon the earth, nor shall any motion be, save in the eternal waters.
Posted by Will Errickson at 2:41 PM

Have you read The Night Ocean by Paul LaFarge? Really good stuff - a fictional account of a relationship between Lovecraft and Barlow with guest appearances by folks like William Burroughs.

I have not... I wondered what the connection was!