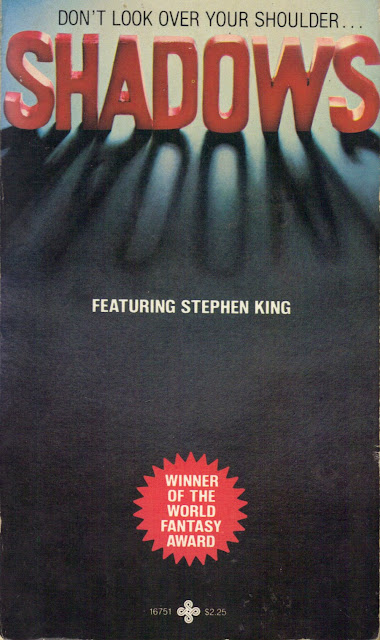 A stark and simple cover image introduces Shadows, first in the long-running quiet horror/dark fantasy anthology series put together by quiet-horror maestro Charles L. Grant. At this period in the 1970s horror fiction had apparently not yet quite found its full and singular identity in the publishing world; Grant solicited tales by fantasy and science fiction writers - and in at least one case, crime writers - to fill out this original volume. The anthology itself won the 1979 World Fantasy Award, as the Bram Stoker Award was still years off; and the lead story, (the maddeningly elusive) "Naples" by SF writer Avram Davidson, won Best Short Fiction as well.

First though - what's up with the refrigerator magnet alphabet cover?! Ew boy. Playboy Press really went all out, no? Berkley Books, who published the reprint a few years later, used the same artwork but subsequent volumes fortunately had more oomph. Like this one, from '88. 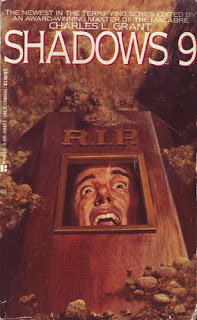 Some of the stories in this first Shadows may be so quiet as to have their final import unheard or unrecognizable - common enough in this style of horror; others end with an unexpected shout in a dark silent room. But the caliber of writing, the actual prose, is uniformly good, from the capable strong hands of the known and unknown author alike. Grant writes intros for each, praising the writer for letting the reader's imagination do most of the work, for carefully crafting tales that lull us into dark and dangerous places, for "leaving out" that "final" sentence which might break the delicate spell of quiet horror: stories that are, as he puts it, like a razor that summons pain after the blood has been spilled. Nice. 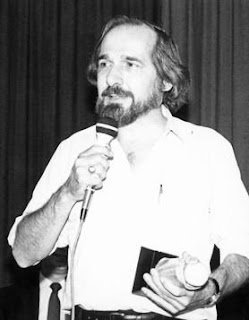 Overall the stories vary widely and well. Eternal horror anthology staple Ramsey Campbell contributes two stories: one long, "The Little Voice," and one very short, "Dead Letters." I found the latter, about a drunken suburban seance, to be chilling good fun; it would have made a fine, light "Night Gallery" episode. The former is in that classic Campbell style that either sneaks up on you and creeps you out, or bores you to tears as you trudge through his subtle allusions and asides in the pluperfect tense. I appreciated the haunting guilt of the main character but found the execution interminable. 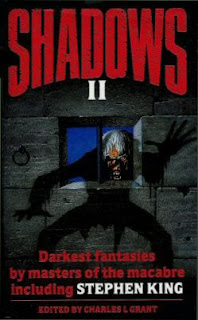 Published 1987 as Shadows II for whatever reason in the UK

Two very little known writers give us two good stories: "Butcher's Thumb," by William Jon Watkins, is a grimly funny EC Comic, and "A Certain Slant of Light" by Raylynn Moore is a sensitively written haunted house story. Mystery writer Bill Pronzini muses longingly upon sex and death in the fractured "Deathlove" (natch). R.A. Lafferty's "Splinters" is odd, quirky, playful; I can't believe I had to Google "eidolon." Cover-noted Stephen King presents his fatalistic tale of a college student and drifter swept up in madness and crime, lust and murder, "Nona." Filled with creepy Freudian psychosexual imagery, it's marred only slightly by a trite final line. He really should have followed Grant's advice and left it out. 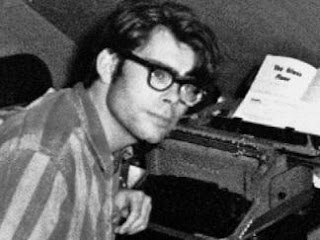 But my favorite was about a young Italian-American man who travels to his family's mother country for genealogical research. "Where All the Songs are Sad" by Thomas F. Monteleone is the longest story and very effective, evoking the rustic superstitions of the old country that aren't quite superstitions. With details of Italian villages so real and minute, he may even be writing an autobiographical piece, and uses a setting similar to Bradbury's marvelous "The Next in Line."


...they came upon the somber entrance to a very old cemetery. Pausing, he was arrested by the starkness of the gates, as if the gray stone and rusted ironwork led into a colorless, other dimension - as perhaps they did. He saw an inscription above the gate in the form of a short couplet: "Un tempo fummo come voi, Presto sarete come noi.""What does it say?" he asked Victoria, who stood silently watching him.
A shudder seemed to pass through her, her eyes lost their sparkle for a moment. "It says: 'Once we were as you, Soon you shall be as we.'"


(In the '90s Monteleone would himself edit an anthology series, the ambitious and experimental Borderlands - I can't believe I don't have my copies anymore! Must re-buy and review). Now, is "Ellisonian" a literary adjective? Because it should be. So let's say "Mory" from SF writer Michael Bishop is Ellisonian: a dark fantasy about an older man plagued by what first appears as a robber, yet without a weapon, in the man's liquor store; what he takes from him will be everything, everything and more. Not even Clark Griswold had a worse time at an amusement park. I wasn't too thrilled with Dennis Etchison's "The Nighthawk" when I read it recently in his The Dark Country, but I suppose it does fit the hushed fantastical tone Grant was looking for. 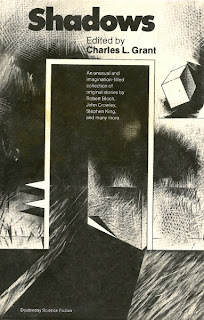 "Picture" is Robert Bloch's wryly morbid entry, a Faustian fable of devilish deals gone wrong, so blackly comically wrong. Classic Bloch. And John Crowley is one of those not-so-prolific fantasy writers who has garnered effusive praise from folks who would never read fantasy (his classic Little, Big sits on my shelf in its original hippy-dippy 1981 paperback edition) and for Shadows he presents "Where Spirits Gat Them Home," a Wallace Stevens-titled tale of distant family relations, lost time, and even religious heresy... oh and death that awaits us patiently no matter what our intentions. 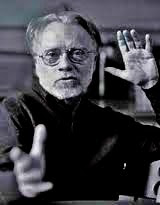 And deaths are well-met everywhere in these Shadows stories. Death inescapable, foreordained, a meeting whose arrangements have been made since long before you were you and we were we (No, the Things that live at the bottoms of old wells and the tops of old houses are old themselves, far older than anybody's ghost). Call it what you will: fate, destiny, bad luck, but it will be there for us all, and often and ironically not even in a respectful darkness but in a bright and unclouded noon, shadowless.
Posted by Will Errickson at 9:54 AM

I'm going to have to pick up some of these. I've been enjoying Charles L. Grant's novels and would like to see what his taste were like in the fiction he collected.

I'm pretty sure you'll be glad you did.

I always enjoyed Grant's anthologies and his own Oxrun Station stories. "Quiet Horror" indeed. The world needs more of it.

And to think I almost missed picking up this copy at a used bookstore: it was stacked in a random pile of beat-up paperbacks by the door. Glad I snagged it last minute. Vol. 3 is on my shelf now too, and my girlfriend has a couple of his anthos too. Also: need to start finding Stuart David Schiff's WHISPER series, which I read in like 7th grade from the library... it never ends, do it?

I've still got my paperback copies of the first Whisper and Borderlands anthologies. Karl Edward Wagner's "Sticks" is in the former.

First a question, dark fantasy and quiet horror are the same? I thought dark fantasy was a term for fantasy novels with some horror background, being the paradigm The dark tower series by Stephen King.

Now Grant, I like some of his tales, but spinning tales with the dead in Prime evil anthology by Douglas Winter is almost uncomprenhisible for me, sometimes quiet horror endings could be unrecognizable as you say, but is my favourite type of horror. I've got Shadows 5 in pdf, have you got it? are you going to comment it? and what about Charles L Grant novels? I have to read the spanish translation of The sound of midnight and will try to read three or so more from Oxrun station in english

pd I love nice and poetic titles in horror stories like the Monteleone in this anthology, although the most poetic title I know is Daughter of the golden west by Dennis Etchison, really being better the title than the story itself