The Crabtastic Mr. Smith: The Dell Paperback Covers of The Crabs Series 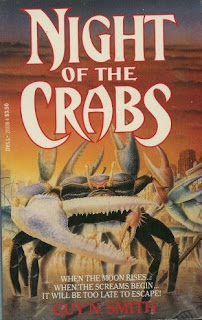 For your crustacean delectation, I present these paperback editions of Guy N. Smith's infamously crass yet undeniably charming Crabs series. Which is about giant man-eating crabs. Which of course you knew. Originally published in England by New English Library and Grafton, during the late 1980s the series was repackaged for American consumption by Dell. To which I'm sure pulp-horror fans shouted a heartfelt Huzzah!

At the top, you'll see Night of the Crabs (UK 1976/Dell 1989) The original (but not the first published in the States; that was Killer Crabs). But this cover doesn't give you a sense of scale so there's no way to know that they're GIANT CRABS. Boo. But check this out! 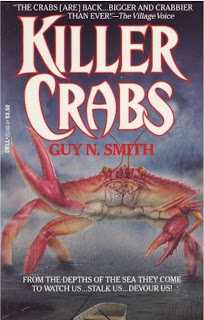 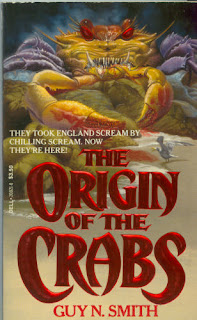 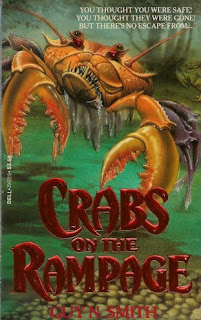 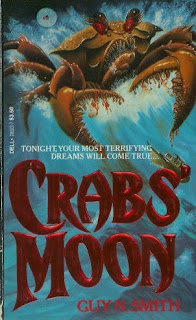 Crabs' Moon (UK 1984/Dell 1988) Now that's an ENORMOUS CRAB! But what makes me happiest about this cover is the correct use of the plural possessive apostrophe, which is quickly becoming obsolete because people are illiterate. 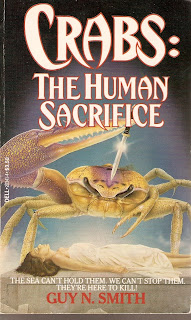 Crabs: The Human Sacrifice (UK 1988/Dell 1989) What the eff is going on here?! Why is a GIANT CRAB using a knife?! Why is it sacrificing anything? Is it a special ritual knife the crabs brought over from Old Blighty? Does anybody know? Most of these Dell editions are collectors' items and not easily found; I don't think I'm gonna spend $20 to find out. However, they are available as something called an "ebook" which I'm led to believe is a book that is not printed on paper between two cardboard covers and that you can't find after diligent searches in musty old used bookstores. That, truly, is a tale of horror unlike any I've ever known... 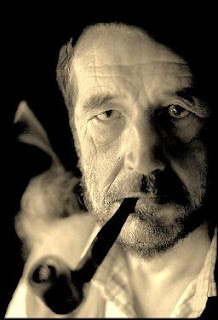 The crabtastic Mr. Smith himself
Posted by Will Errickson at 2:53 PM

What is it with that Guy, and crabs? Dr. Freud call your office!

I'll have a crabby patty!

Holy smoke! In Crabs' Moon that crab is big enough to fight Godzilla!

I have a feeling a few of these will be on my shelf before the year is finished. I just can't resist them, not when I'm so curious to see what they are like.

You should have lots and lots more awards..

I need to get my hands on these books!

Its a giant enemy crab! Hit its weak spot for massive damage!

Thank you Jen! Let me know if you're able to get your pincers - er, hands on any of these, esp if CHEAP.

Great to see the Crabtastic Mr. Smith getting a guernsey on your blog. I collected these US editions a while ago (as I'm a Smith completist) and thought them amusing; I was never sure about the knife, either; hardly a substitute for giant pincers!). The proportions are kind of wonky on most covers, too. The NEL Crabs' Moon' gets the punctuation right also.

William, for pure pulpy goodness, the Crabs books are sublime.

Smith is his own industry!

Why do you have a knife? YOU ARE A CRAB. Snip her head off with your enormous claw and be done with it!

I've got these, but only read a couple of them so far. Pure Guy N. Smith -- light on the plausibility, zero on the artistic merit, but overloaded on the gore and mayhem. In other words... perfect! :)

Will, I LOVE your blog!
Really, I do have a big book collection and I ever liked these american cover illustrations so much. Now I know that I have to collect much more english editions ;)