The Paperback Covers of Shaun Hutson: Ain't Nothin' but a Gorehound 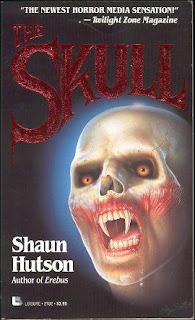 Well, nobody asked for 'em but here they are: the covers of Shaun Hutson's pulp horror paperbacks from the 1980s, all published by Leisure Books. Hutson's reputation is that of a goremonger for gore's sake and often gets lumped in with the splatterpunks. Me, I'd put him in with Guy N. Smith, pale imitators of James Herbert, and not to be confused with Barker or Schow or Lansdale et al. Still, this being a horror fiction blog and all, I feature Hutson because he was pretty central to the paperback boom of the era. 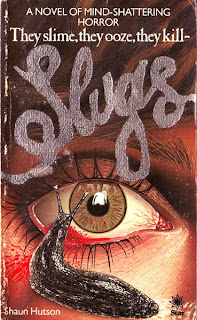 Some of you may have read my review of Slugs (1982), Hutson's most infamous work; while it had energy and gleeful carnage, it was rather a shitty Xerox of Herbert's The Rats. Yes, this stuff has its place in horror, when you want to put your brains on vacation, but honestly Hutson's never interested me at all; I generally want a lot more from my horror fiction than sleazy grody pulp. But I have to say these cover images are really cream of the crop of excessively graphic '80s horror paperbacks! Enjoy.

Admittedly, The Skull (1982/Leisure 1989) is pretty reductive for a horror paperback cover; not only is it a skull, but it's a skull with fangs. 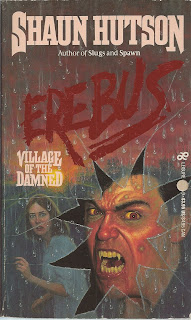 Erebus (1984/Leisure 1988) is the personification of darkness in Greek mythology as well as a region of the Underworld, so yeah, great horror title! I love the intensity on the vampire's face - he's got a real Ray Liotta vibe. 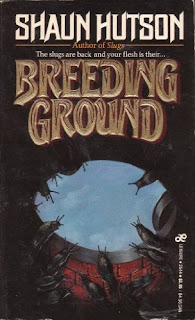 The inevitable sequel to Slugs came in the form of Breeding Ground (1985/Leisure 1987). This has a Tor Horror look to it, but it's nothing too outrageous. 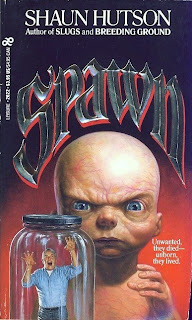 Holy shit, this cover for Spawn (1983/Leisure 1988) is amazing! Reminds me of mad-scientist science-fiction pulp from the '50s. Check out a good review at PorPor Books blog - thanks for the pic! 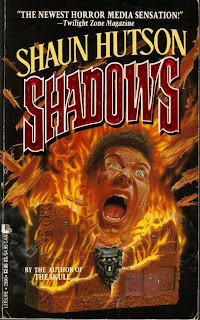 Aaaaaaahhhhh!!! With its obnoxious and intense cover art, Shadows (1985/Leisure 1990) is as far removed from the vintage Charles L. Grant identically-titled anthology series as you could probably get. It's also about psychic healers and whatnot, which is one of my least favorite sub-sub-subgenres of supernatural horror. Ah well.

And as for Charlie Grant's Shadows, well, check back real soon!
Posted by Will Errickson at 11:53 AM

Recently read "The Skull" and posted a review of it - absolute trash. I dug "Slugs" and I'm always on the lookout for a copy of the sequel, but yeah, Hutson's stuff is hardly worth the paper it's printed on. That said my paperback of "The Skull" has a much cooler - and much less goofy looking - cover.

Yep, I read your review a couple days ago, Aaron, and that was what got me thinking more about Hutson - so thanks!

Thanks for the link to the review of SPAWN. I will give it credit: originality. Would also make a great movie.

I haven't read any Hutson, and I'm pretty sure I won't be running around to find anything in the near future based on the thoughts here (can't say that I won't eventually read him, cause I never know what will land in my lap). However, I do like that cover of the SPAWN novel. Very creepy. Had I seen that on the shelf at a bookstore without having heard anything about the author or his works I probably would have bought it.

I read one Hutson when I was about 14, RENEGADES which I sort of enjoyed for it's bad-ass British agents taking on all sorts of Irish terrorists while a Gilles De Rais obssessed occultist attempts to summon a demon. I liked it for what it was but already felt I should demand more from my horror fiction.

I'll give him credit though for turning me onto David Morrell's THE TOTEM which is the kind of book I realize Hutson wished he could write.

Is THE TOTEM horror or not? I haven't read it but I can't get a read on it from reviews online.

I have a copy of The Totem, but haven't read it yet. A lot of David Morrell's work borders on horror, but has a heavy suspense feel as well. Many of the stories in his Dark Evening anthology were pure horror, however, and pretty good at that.

Hadn't heard of that Morrell collection, just looked it up, sounds really cool! Had no idea it existed, so thanks.

I can understand the confusion as there is nothing explicitly supernatural in the novel, I really don't want to get spoiler-y, but the horror lies in a cast that pays a terrible toll mentally and physically due to an intriguing mixture of insanity, atavism and... something else, that suggests how legends about vampires and werewolves may have arisen in the past.

Sounds terrific, Kevin. Another title added to the must-have list!

I had a auxiliary teacher, an english girl who goes to our classroom for the students to speak only in english with her, in the local school of languages and talking about books he said stephen King was tame for her and that she prefered Shaun Hutson and suggested me The spawning but it isn't even now translated to spanish and I hadn't so much interest for Shaun Hutson either...

talking about more interesting things... David Morrell ... First blood is one of the best action/adventure novels I have read and he has great stories too, like that about a supernatural typewriter, The typewriter I think, have you read it? that anthology looks very interesting just as The totem, that I think is not translated to spanish, by the title I thought it was based on native indian mythology, no such elements on the book?

Just got a copy of Spawn in the mail today, complete with that uber-excellent cover! I'm pretty pumped to dive into the Hutson pool. Let's see how trashy it gets.

I read Hutson's 'Compulsion' in the last few days as I was intrigued by the premise of 'hoodies' attacking a retirement home. It was absolutely wretched. Hutson doesn't so much write as list, no attempt is made to rise about banality & cliche, 400 pages ( albeit spread over 2-4 page 'chapters' ) of tedious dialogue, cardboard characterisation & Jackie Collins level descriptive writing. I lost count of how many times the lead character 'ran a hand through her hair'.
I read an interview with him where he said he didn't read books. He doesn't write them either. I reserved 'Compulsion' from the library, I actually feel cheated out of the 75p reservation fee.