The Blooding by William Darrid (1979): The Rabid Dog on Main Street Howls 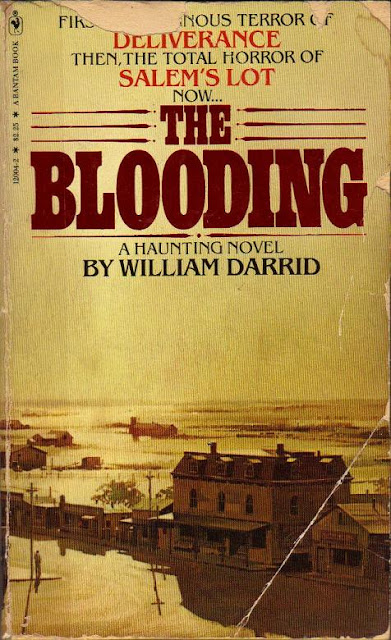 Well, it's certainly no The Bloodening. Alas.

I really wanted to like this first novel by William Darrid, a paperback original with somber cover art and the perfectly '70s title of The Blooding. There are no reviews for it on Amazon, one on Goodreads, and one here, which is where I first found out about it. Interesting that one of the novels it's compared to isn't The Other or Rosemary's Baby, but James Dickey's Deliverance. Why, that's literary class right there! 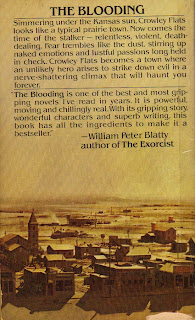 Darrid, a Broadway and television producer, is a solid writer, easily bringing to life this dusty locale during WWII, and begins weaving in the plight of a rabid dog (hmm...) named Jim Dandy as it slowly wends its way through the lives and roads of Crowley Flats. But I just couldn't stick with it; I tried and tried but somehow the novel never clicked for me. And did I want to like it! Really great cover (artist unknown—update 2015: artist is Lou Feck) of a placid, stillborn town; it all just oozes dread the more you look at it, the landscape sere and foreboding, noonday evil beneath a blazing sun...

Of course "a haunting novel" is not the same thing as "a horror novel." That's not a bad thing, as it's much more a quiet, brooding kind of Western (perhaps a weak Xerox of Larry McMurtry?) and it was probably unfair to compare it to 'Salem's Lot. I simply was not captivated and put the book back on my shelf only half-read. But maybe, just maybe, some of you have read The Blooding, and you can just let me know what you thought, especially if its nerve-shattering climax haunts you forever.
Posted by Will Errickson at 5:55 AM

I'll have to give it a read. One of these days when my "To Read" pile is much smaller. Yeah, 70s title is great.

talking about books without reviews on amazon, do you know The spawning by LJ Key? I remember read it some time ago, it is translated to spanish, and been more or less interesting, stories about wealthy people with dark secrets are very appealling for me

70s title? do you mean the tipography?

I don't know THE SPAWNING, Francisco, but thanks for telling me about it.

As for "70s title" I mean that after King's THE SHINING, lots of horror novels - and films - used "-ing" titles. It became a silly cliche... hence "The Simpsons" horror movie parody that I referenced.

I got this book a couple months ago based on its '70s pub date and that it takes place in my native state. The book takes forever to get anywhere, yes the build up was great but it was drawn out for too long and the father-son relationship just kept going in circles. The climax in the last 20 pages not nerve-shattering IMHO. It's going back to the store for some credit.