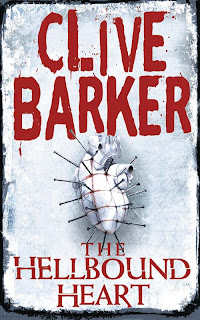 Okay, they're not vintage and they're not collectible and they're not even available in the United States, but I recently found out that Clive Barker's novels have been reissued by Harper Collins under their Voyager imprint. I dig 'em; thought you might too. They're classy and accurate. How refreshing!

Above you see The Hellbound Heart, his 1986 novella which was the basis for some movie or other. I haven't read it since 1992 but I remember enjoying it. That cover image is perfect, utterly perfect, don't you think? Unfortunately I could not find the artist's name. 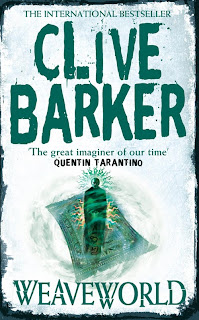 Odd that Tarantino has a blurb for an epic dark fantasy novel, but still, it's cool. I've read Weaveworld (1987) a few times, and reviewed it here. 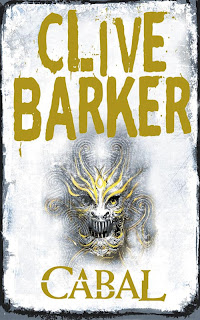 Cabal (1988), another novella that led to another movie you mighta heard of. Nice tattoo-like imagery, evoking perhaps the monster Peloquin. 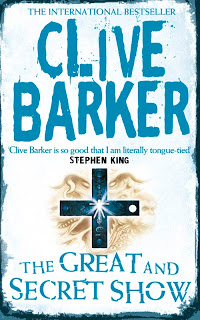 The American editions of The Great and Secret Show (1989) never used the strange totemic pendant that features so largely in the novel, its details showing the strange physical and spiritual evolution of humanity. The first in that eternally-planned trilogy entitled - not too pretentiously now! - The Art. 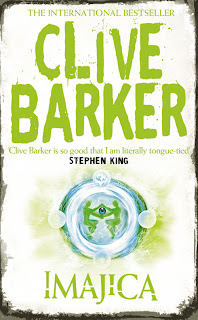 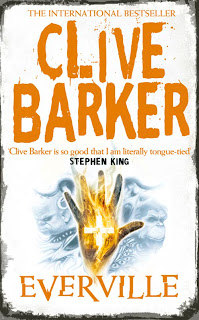 The first sequel to Great and Secret Show, 1994's Everville, also uses the pendant and reuses another famous King quote about Barker. I loved Everville back in '95 and wrote an effusively earnest review for Amazon way back when that makes me cringe now. 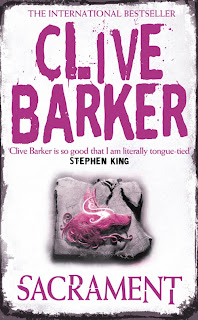 Sacrament (1996) was a departure: not an epic, but a much more personal story about a wildlife photographer's near-fatal run-in with a polar bear, and his recovery. Although the photographer is Barker's first major homosexual character, Sacrament is more mainstream than most of his stuff, but still has that unique sort of dark fantasy Barker's great at. It's a novel I recommend to non-horror readers. 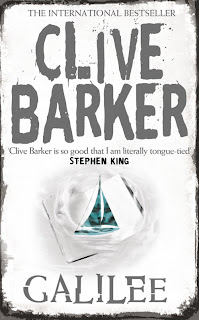 Lots of sex and intrigue, this was Barker obviously out for a lark, producing a straight potboiler but in his own unmistakable voice. He's insisted that Galilee (1998) was the beginning of another series of novels about a Kennedy-esque clan. I'll believe it when I see it. 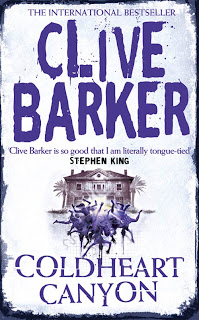 And here's Barker on the back cover of the US paperback edition of Everville. Handsome! 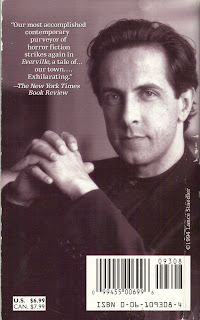 Posted by Will Errickson at 8:45 AM

I actually got the chance to meet Clive this past October at the Spooky Empire convention. Sweet guy; he couldn't speak all that much, but we exchanged a few jokes and he even personalized his signature on my Books of Blood. Definitely a highlight. I really should read more of his stuff though, eh?

Some great covers that I've never seen before. Clive Barker is one of my all time favorites, so seeing these was very interesting. Of course, I do like most of the covers that were used on this side of the pond as well, yet there is something I can't really pinpoint about these ones you have displayed that really stand out to me. It's almost seems like they are somehow cleaner? I don't know if that makes sense. Maybe it has something to do with the white backgrounds. Not really sure.

I love Barker's epic and fantastic novels like Imajica and The Great and Secret Show, as well. Everville however, I found long-winded and disappointing. Sacrament was okay, but was the last thing I read from him.

Jose - I've met Clive a handful of times and yes, he's awesome. BOOKS OF BLOOD, all six volumes, are horror essentials! READ THEM!

William - I think it's the white background which makes the covers so striking.

Lazlo - I can't believe it's been over 10 years that I've read a Barker novel that I've loved!

I'd have to say everything about him is idolizing; his passion for art, his beliefs, his emotion, his work, even his

fucking awesome gravelly voice. Those covers are great, and yeah, I think it's odd, too, how King has blurbs on all the covers but Tarantino has a Blurb on Weaveworld, and that no blurb exist on the Hellbound Heart :/ Oh well. Nice stuff!

Indeed, Mr. Rudd! Although I do miss the much younger Clive's charming Liverpudlian lilt:

Too many cigars in the intervening years, methinks. But that's how I remember him best!

I'll admit to being rather ignorant with regards to Barker. The only work of his I've read was his recent short piece with a demon main character, the name of which I'm blanking on. The fellow never shuts up about how the book should be destroyed, Gutenberg's involved, and so forth. I'll admit I was far from enamored from that read, but his reputation's stellar enough that I'll give his classic stuff another shot... but which work? Do you have a favorite, or a particularly good entry point?

All the BOOKS OF BLOOD... if you'd like, you can find & read my reviews of 'em here and see what you'd think. The book you read was MISTER B. GONE which I don't think anyone saw as a return to form for Barker.

Loveeeee Barker. Have you ever read The Thief of Always? Very few books intended for all ages are actually successful in that regard, but I read this book at 27 years old (in one day) and had a blast! Can't wait until my niece turns 10 (she just turned eight which is a tad young I think) so I can let her read it on Halloween.

I just finsihed Imajica today. Blasted through the last 100 pages like it was my job haha. What a fantastic read, and I can only pity those who passed on it because of its length (my hardcover is 824 pages).

Without exaggerating, I consider Clive Barker to have the greatst imagination I've ever read. Only Bradbury, maybe Isaac Asimov or Neil Gaiman, come close to sheer wierdness, epicness, and uniqueness.

Care to recommend which Barker book I should devour next? I have Sacrament, Galilee, Hellbound Heart, and Coldheart Canyon. I'm leaning towards sacrament because the pink cover with the fox is so seductive.

Read THIEF when it came out, had a nice limited edition of it (but had to sell it a long time ago!). Enjoyed it more than I expected to, but I've never reread it.

IMAJICA is glorious, one of my fave novels ever, and Barker is one of my top two or three fave artists of any kind.

Out of that stack, I'd suggest HELLBOUND HEART as it is most perfectly Barkerian.

Thanks for all the comments!