The Search for Joseph Tully by William H. Hallahan (1974): Trapped Under Ice 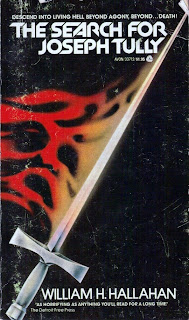 Another bestselling title unknown and forgotten to the general public today but which gets spoken of with much awe and respect by genre fans is The Search for Joseph Tully. Creating an inescapable mood of wintry dread hanging over a soon-to-be-demolished historical apartment building in a disused part of Brooklyn, author William H. Hallahan skillfully brings together two disparate stories in a frigid climax of suggestive '70s horror. Its use of seances, hypnosis, medieval occult thought, and Catholic heresy dates it enjoyably, its genealogical-research angle is more effective than anyone would think, and Hallahan's smooth spare style gives you just enough detail to let your imagination do some work. Sure, modern horror fiction fans might find it too spare and too tame, might find that it doesn't give the goods except in tiny measured doses at too-distant intervals; they might find it that, true, but I found it highly readable and satisfying.

Basically, I raced through Tully (perhaps a bit too quickly; there's some of that, whatchacallit, symbolism here I fear I missed) and its story of Pete Richardson, an editor who is plagued by night terrors, waking each night to a strange whooshing sound, convinced someone is about trying to murder him. His rather eccentric apartment co-dwellers don't do much to disabuse him of this notion. In fact, they alternately insist on holding a seance, or hypnotizing him, or regaling him with ancient Church heresies and the burning at the stake of Giordano Bruno. As their apartment building is threatened with being torn down by the wrecking balls getting closer daily, each neighbor moves away, leaving Richardson horribly alone, cold, frightened, perhaps paranoid or even mad. 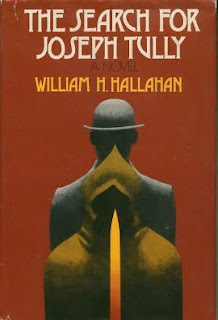 1974 hardcover
The other story is of Matthew Willow, a young man on the titular search. Hallahan wrings solid suspense from the tricky, painstaking work of genealogical research that in other hands could become dry and boring. Joseph Tully was an 18th century wine merchant from England who with his sons tried to set up a vast wine company in the mid-Atlantic States, but tragedy and war prevent success. Hallahan gives quick, detailed sketches of the harrowing frontier lives of Tully's descendants in pre-Revolutionary New Jersey and New York, then as wild and unsettled as the West, and as wild and unsettling as any scene of violent supernatural horror. We get caught up in the little victories and distressing dead-ends of Willow's seemingly endless trips to city archives in libraries, churches, basements and bookstores. Why is Willow searching for Joseph Tully? Just know that he is, that's all. Being quite a research nerd myself, and with my copy of the 1977 Avon paperback (with a relevant if uninspired cover) giving off that wonderful old bookstore smell, I was quite charmed - and sometimes chilled - by this aspect of the novel. 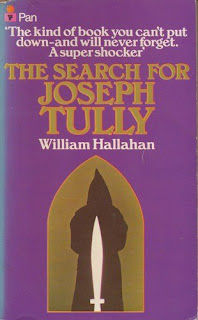 1976 UK paperback
Honestly, I reveled in Tully's lonely, despairing, fatalistic tone. Chapters are short, enigmatic, vaguely existential - indeed we get several references to the idea that the birth of existential man was in the death camps of WWII. There are lots of people looking forlornly out of windows onto landscapes of frozen fields and streets and rundown cities trapped in snowy desolation, while the apartment building slowly empties out beneath swirling winds and high clouds moving out towards the black waters of the North Atlantic. Everywhere there is palpable cold and frost and snow and slush, and all the while terrors whisper across generations, mysterious terrors of vengeance and lost souls unmoored from justice and eternal rest, which only man can render unto man, no matter what. 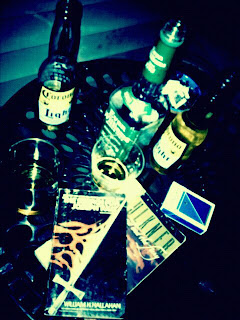 Yeah, this is a great novel. A real slow burner with a great sense of atmosphere. I'm also rather fond of his "Keeper of the Children", which is much less restrained. Possessed dolls and cats, it's like a Charles Band wet dream.

That Keeper of Children has one helluva cover, so I'm going to be on the lookout.

Wow, Will. I was hoping you'd write about this one--or "Keeper of the Children." I really loved this book as a kid. The author was a friend of the family so his books were always around. I began reading his books as a young teen since I had met him--hard to top that novelty factor!--and was especially hooked on these two. The Search had me guessing until the last page. Awesome stuff.

Jeez, I really want to re-read this one now.

Oh, and "The Ross Forgery" is also good, if I remember correctly. A little more like a mystery than these, but a page turner nevertheless.

I read this as a teen in the 70's and recently nabbed a copy again. It is a really good, scary read; as you said, notable for its intense, forboding atmosphere of dread and hopelessness. Sad that it is so forgotten today - remember seeing brief television commercials for it back in the day.

Still have the pan paperback. It really sticks with you. Not a blood and guts horror but one that creeps into your mind. Not read the others mentioned and much search them out.

Is he still writing?

According to his website his latest book is from December 2003, so... no?

This continues to be a favorite novel some 30 years after I read it. It is in a sense to much of horror fiction as the 1963 version of The Haunting is to the execrable 1999 version. If you adore that remake, you will not enjoy this novel with its subtleties, slow build, and intertwining stories.

This was kind of hit or miss for me… until the ending. I also didn’t know why Willow was conducting the “Search,” but I just assumed it was something I’d missed. Soooo, the reveal was such an AH-HA! moment for me that I gave it an additional star on Goodreads just for that ending.

What 3F's said. Hallahan tied everything up except why Willow was conducting the search; why did he have this mission? And what was the ultimate purpose of the mission that's been going on for generations? An ending like that just doesn't work if there are loose ends left hanging and this is a big one that left me scratching my head too much, and I say this as someone who generally doesn't need everything explained to me in a book or film. This just...didn't amount to much by the conclusion. There's plentiful rich texture of the snowy Brooklyn environs crumbling around the characters, though, and I was very engrossed in Willow's search process. This felt like a rough draft that could have used some further ironing out, but at least the characters are consistently intriguing and kept me reading. If the last few chapters were stronger, this would have earned a much stronger recommendation from me.

It's been many years since I read this, but I seem to remember(for those wondering)that Willow was a descendant of the unfortunate fellow who met a bad end at the very beginning of the book. At least, that's how I remember it. Really need to pick up a copy and read this again as I remember it to be quite involving...