The Elementals by Michael McDowell (1981): Just a Meanness in This World 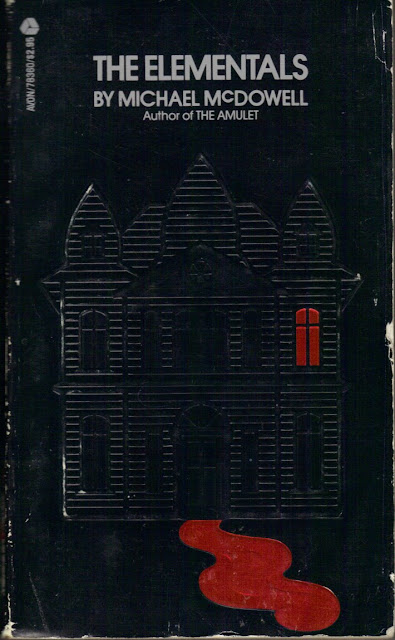 Using the well-worn but welcome literary trope of a rich and influential Southern family who suffers grief and hardship, The Elementals is Michael McDowell's fourth paperback original horror novel from Avon Books. Meet Mother Marian Savage, matriarch of the Savage family from Mobile, Alabama. Although her strangely ritualistic funeral forms the novel's prologue, her spirit, for lack of a better word, hovers about her adult children and grandchild as the story continues. But it is not only Mother Savage who will hold nightmare sway over her brood ("Savage mothers eat their children up!"). With touches of the Gothic and the surreal, McDowell has wrought a not-quite-ghost story that's both intimately real and metaphysically unreal. 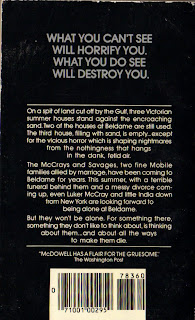 Surviving son Dauphin Savage and his wife Leigh, as well as Leigh's family the McCrays - mother Big Barbara, brother Luker, and his 13-year-old daughter India - try to escape the oppressive weight of mother's memory by spending the summer at Beldame, a bit of land on the Gulf with three Victorian homes on it. The family summers here have been going on for decades. With them is Odessa Red, the Savages' long-employed black servant, who knows virtually every secret there is about the family. Even, perhaps, why two of Beldame's homes are livable, but the third is, astonishingly, slowly being buried beneath an enormous dune of blinding white and sugar-fine beach sand. Indeed, it is piling into the rooms through every crevice and crack; it did not merely encroach upon the house, it had actually begun to swallow it... sand covered the entire front of the house to a line well above the verandah roof. 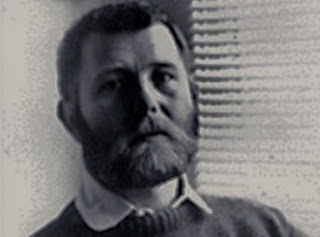 McDowell smartly pays out his story in even, rational measures, never overplaying it as he gives mild hints through dialogue, image, and circumstance that something unnatural is going on in that third house. This vacation won't be pleasurable: Big Barbara's given up her bourbon-soaked afternoons and worries about her crumbling marriage to local politician Lawton McCray, who wants to buy Beldame from Dauphin for oil drilling. None of the adults will go near the third house; Luker and Dauphin have vague disturbing memories of it from their childhood. 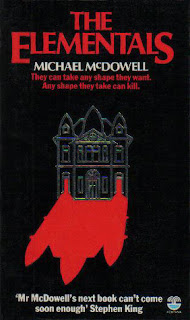 When India, the bright, charmingly foul-mouthed, New York-born young teenager driven to lassitude by the maddening heat during the day and the dead-silent blackness of night, becomes fascinated by the third house, she asks Odessa to help her take pictures of it. Odessa might be uneducated and superstitious but she's loyal to the family, goes along with the girl. Later, India shows her father the photograph:

It was a photo of the verandah showing the handsome curve of the dune that was overtaking the side of the third house. But Luker saw at once the fat gray creature that was huddled behind the low porch railing.... Luker thought that it might be the animated fetus of an elephant. Its white pupil stared out into the camera lens.

"It makes me want to vomit," said India matter-of-factly.

*shiver* And just what are the "elementals" you ask? Wisely McDowell alludes to them subtly; they are something like three-dimensional hallucinations, living between the very molecules of the air, the land, the sea, the house. They are human weaknesses and wounds and rot and heat and they can recreate themselves as us... imperfectly. The beleaguered family will battle them, but hopelessly, and one will see with their very own eyes the full extent of the power of the elementals. 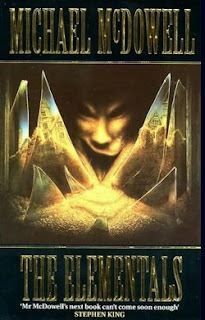 Overall The Elementals made me think of those morbid 19th century photos of families posing with their dead children, which is quite a tone to recreate. Sadly it's out of print - as are all of McDowell's novels - but I'd love to see The Elementals (inexpensively) reprinted with a more accurate and evocative cover; there are plenty of weird and striking images from which to choose, not the least the house filling with sand; also apparitions with sand spilling out of their mouths; a lone black-and-orange sail on the Gulf horizon; and a monstrous blind baby that can still find its way by using its huge misshapen ears to hear the final tortured breaths of its victims...

Update 2014: You can now purchase a new trade paperback edition of The Elementals from Valancourt Books! Click here.
Posted by Will Errickson at 9:33 AM

I've never heard of this Will, but it sounds intriguing from your review. I recently picked up Rex Miller's wonderfully vulgar 'Slob', a 1st edition paperback of King's 'Danse Macabre' and 'Firestarter' and 'Minotaur' by John Farris on Ebay. Do you know much about the latter title?

McDowell's not a name most folks recognize but I believe he's garnered a fair cult following, going by the various things I've read about him online. Don't much about Minotaur; Farris can be hit or miss, I think.

"I refuse to pay more than a few bucks for these old paperbacks. Patience is key."
I'm with you on that one. There is no reason why a book which was MADE to be inexpensive (a paperback) should suddenly be worth big bucks. Patience and a watchful eye are indeed the key.

I haven't read The Elementals but I did read his Cold Moon over Babylon when I was a wee lad and it's stuck with me over the years. It truly put the fear of slow moving Southern rivers into me. One of these days I'm going to start his Blackwater series...I'm with you on not paying more than a few bucks for these horror paperbacks unless it's something you're freakin' dying (hehehe) for. Just take a look at the prices of Johnstone's horror paperbacks: utter foolishness ! They're not even that g-o-o-d. Ya know ?

Great blog. I check it constantly.

I too have never heard of this and am now interested in reading Michael McDowell as well. I swear before Christmas this year when people ask me what I want I should just give them a link to your blog and tell them to find me all the books you recommend. So many intriguing posts about books I never knew existed. Keep up the good work.

Thanks for the good words everybody. I hope you guys are able to track this Elementals down! Stephen King was pretty enamored of McDowell and it's easy to see why--even though King did blurb a lot of mediocre books, he was right about this dude.

Great review, Will. I'm a huge McDowell fan. His favorites of mine are KATIE and COLD MOON OVER BABYLON (truly a haunting, uneasy read). GILDED NEEDLES very good, too. Would be sweet to see his BLACKWATER series reprinted as a giant hardback also. Shame he passed away. A really talented guy.

I'm late to this outtasite site, but yes, McDowell was a really good paperback writer and all of his work is worth seeking out. I recommend the Blackwater series in particular -the whole saga is 6 short novels which I can guarantee you will plow through quickly. Anyone who wants to know more about McDowell can check out Douglas Winter's Faces of Fear, a good mid-80's collection of interviews with noted horror writers of the day.

Actually, I'm almost halfway through McDowell's The Amulet right now! Thanks for stopping by, Rob, and also for reminding me of Faces of Fear...

Picked this up recently, and I'm 80 pages in - great, so far. Love McDowell's style, and the pacing is to my taste.
Will try and track down 'The Amulet', as well.

Lincoln, I think McDowell always paces his books wonderfully. If you dig this one you'll probably like 'em all!

Finished this tonight - absolutely superb, great novel.
Managed to snare a copy of 'Cold Moon...' on ebay, so will put that on top of the pile when it arrives.
Always good to find a new author to read, and collect, but I am disappointed with myself for not at least trying him back in the 80's/90's.
Next up is another one I read about on your wonderful blog - 'The Cipher'.

I've kicked myself for not trying his books back then either, they were always around. Oh well...

Can't wait to hear what you think of THE CIPHER!

I'm glad I've hung onto my old paperbacks like these, bought super-cheap at newsagents when I was a teenager. (I won't keep them in my bedroom though.)
Husband was kind enough to track down the entire Blackwater series for me for Christmas last year.

I just want to know who the deformed baby is! For Christ sake.