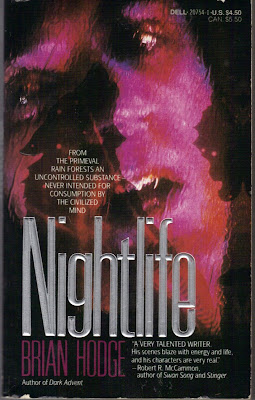 Another novel that I loved when I first read it and have been looking forward to rereading for this blog is Brian Hodge's Nightlife (May 1991), the second title from the Dell/Abyss line of paperback originals (which had begun with Kathe Koja's The Cipher). At the time, I'd never read anything by Hodge, but I was sufficiently impressed by the goals set by Dell for this supposedly new style of horror - one of more psychological realism and fewer supernatural cliches - that I bought it almost immediately upon publication. Nightlife was Hodge's third novel and it did mine a rather new landscape for horror: the South American rain forest and its psychoactive plants , which the native tribes use as part of their ritualistic communions with hekura, the demon-spirit underworld. 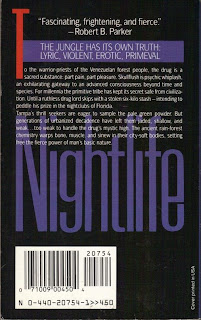 Hodge imagines a monstrous mind- and body-altering entheogenic drug stolen by a drug kingpin from a primitive and violent Venezuelan tribe, the Yanomamo, who've kept it from modern civilization for ages. It doesn't just cause hallucinations; it melds bodies into flesh-and-bone animal hybrids, which is why the tribe who cultivated the drug are the most feared in the jungle. An ambitious drug dealer dubs it "skullflush" and launches into the "city-soft bodies" (as the back cover puts it) of the denizens of Florida's, er, nightlife. But then one young male native, Kerebawa, trained in civilization's ways and language by a doomed missionary who was actually converted to the Yanomamo's beliefs, comes to Tampa to retrieve it before it can wreak its demonic havoc on us American pussies who never engage our, you know, spirit animals. 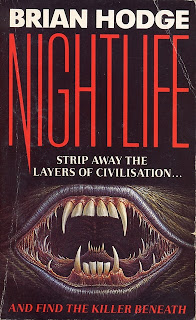 Now, this kind of human transformation is in one sense familiar horror territory: Jekyll and Hyde and werewolves reside near one another on this mythic map, but Hodge goes Schultes instead of Stevenson; it's more Chagnon than Chaney Jr, Huxley more than Henry Hull. You can tell Hodge did his anthropological research, if at times a little too obviously since incorporating facts about the infamous Yanomamo tribe is tricky in a narrative. The flights of infinite metaphorical fantasy when characters snort the drug seem underwritten, or rather perhaps too earnest and literal - people seeing to the edge of the cosmos or getting in touch with their own personal demon-animal inside them, that sort of thing; peering into the broken places and seeing what a modern world cannot heal.

Like a lot of splatterpunk stories - which this novel definitely is not - Hodge is concerned with the betrayers and the betrayed and the wounds his characters carry around like a totem. But I could only take so many "soulful" and "desperate" confrontations between Justin and April, the new lovers on the run from the skullflush-addicted drug dealer, and ruminations upon "what went wrong" in the past. Tightening this baby up by 50 or 75 pages I think would not have hurt at all. 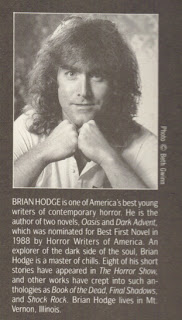 Hodge's next two novels, Deathgrip (1992) and The Darker Saints (1993), were also published by Dell. I know I read and enjoyed them but can't recall much, but I always remembered Hodge fondly. For years I wondered what he had been in up to as I never saw any of his books again; once I was able to find info about him on the internet it turns out he began writing crime novels around 2000. Rereading Nightlife, that now makes sense: it's not scary at all, there is the detailed drug trade and narco cops, the attendant thugs and bodyguards with quirky tastes befitting more educated men, the last-ditch machinations of losers trying to get their lives back together, and then there's Kerebewa, that resourceful Yanomamo warrior. I don't think Hodge ever actually met a Yanomamo warrior, but Kerebewa's culture-clash moments and his loyalty are at once corny and endearing. 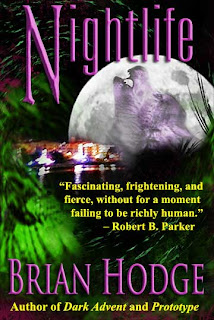 These aspects seems more like something you'd find in a Elmore Leonard, Carl Hiaasen, or Donald Westlake crime novel than in horror fiction. I'm not saying Hodge is anywhere near as good as those guys - god, who is? - just that today I can see who his inspirations probably were. His action set pieces are maybe overdone but I think he should get points for the set-ups, and the whiz-bang climax is good. And I found a 1990 interview from just before Nightlife was published, and I had one of those "oh shit" flashbacks: I recalled that I'd read this same interview back in the day and read my first Hiaasen novel because of Hodge's recommendation. I knew I remembered Hodge fondly for a reason.
Posted by Will Errickson at 7:30 AM

It seems like your kind of underplaying Hodge's talent a bit here. I love your reviews but I disagree with sort of throwing Hodge to the side. His talent is immense. Re-read "Deathgrip", its incredible.

I didn't mean to throw Hodge by the side, altho' I can see how it seems that way. NIGHTLIFE is a worthy read. Wasn't a fan at all of his previous novel DARK ADVENT, but I will continue to read him. I also have a copy of PROTOTYPE, and I liked his short story in LOVE IN VEIN.

Good review of NIGHTLIFE here Mr. Errickson. DEATHGRIP has moments and I'll admit I skimmed it because I am recovering from being a drunk. However, DEATHGRIP goes into Sumer archeology like Neal Stephenson's SNOW CRASH did. DEATHGRIP was '91, SNOW CRASH was '92, so the war in Iraq may have revealed some more Cuneiform or revived interest. I enjoy your writing. Thank you.

Thanks Edward! You know, I am positive I read DEATHGRIP when it came out - there's a horrific scene early on in which a car crashes into a record store - but I don't remember Sumer archeology (altho' I do recall it in SNOW CRASH). Glad you're digging this stuff!