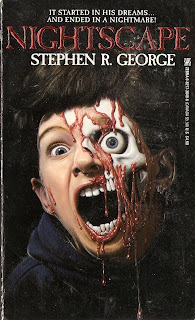 I've been a bit busier than usual, as well as waiting on the snail mail delivery of a whole new stack of horror novels, so I haven't been able to post here as much as I'd like this past week. However there are several blogs of note I've been reading which I believe all horror fiction fans should be aware of. The Mighty Blowhole has a new post on outrageously tasteless and ridiculously silly horror paperback covers, some of which I've posted here but most which I have not run across myself. The amazing image above, of Stephen George's Nightscape, is but a taste...

Bill R. at The Kind of Face You Hate - this season known as The Kind of Face You Slash!!! - has been delving into contemporary horror writers, something I don't do too often. This is of course to my own detriment. This Brian Evenson sounds like the real deal, apparently an awesome amalgam of J.G. Ballard, Thomas Ligotti, Poe, and Jim Thompson.

And the always-awesome Retrospace has a collage of Dracula paperback covers and a look back at cinema's greatest vampires.

This weekend I started a cool '80s horror novel that has some stellar Amazon (and elsewhere) reviews, and have just gotten about halfway in; I expect the review to be up tomorrow or Wednesday. But again, busy: apparently there's some sort of horror-related holiday on the horizon.
Posted by Will Errickson at 6:50 AM

Jeez, that Nightscape cover is something!

Isn't it just? I can barely look directly at it.