I read recently that bestselling '80s horror-fiction scribe Robert R. McCammon refuses to allow his first four novels to be republished today as he feels they're lacking in quality. That may be; I've never read them. It's true! Despite his overwhelming popularity in the late 1980s, I was never much interested in his work, for whatever reason. Every time I mentioned that I liked horror fiction back then, someone would invariably bring him up (or Koontz or John Saul, two other writers I had very little to no time for). I think I read the first few pages of his oft-acclaimed epic Stand-like novel Swan Song (1987) but remained unmoved; then perhaps a short story or two from Blue World (1990) or Book of the Dead (1989). Ah well.

These first four novels, Avon paperback originals all, are varying in terms of cover art quality; I think we can agree that Night Boat (1980), above, is the coolest of the lot. I've heard it's a pretty decent Nazi-zombie read. 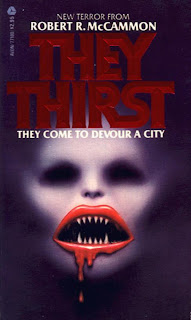 They Thirst (1981) Pretty pedestrian but there's at least a kindertrauma associated with it. 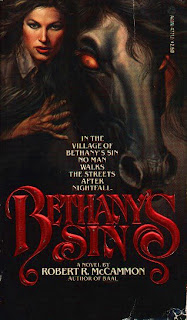 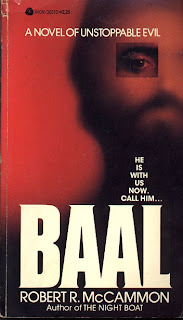 Baal (1978) Wow, did they give the design job to the night janitor, or the new artist on their first day? Terrible.

McCammon's next two novels, Usher's Passing (1983) and Mystery Walk (1984), were published in hardcover by Holt, Rinehart, & Winston, while the first paperback editions were from Ballantine. The pumpkin house-mouth is kinda interesting. 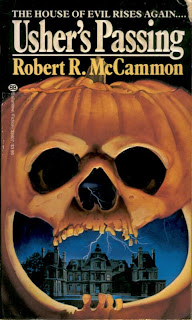 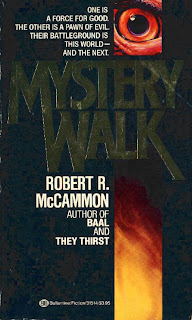 These older paperback covers aren't nearly as well-known as the Pocket Books reprints of later years, after Swan Song became a NYT bestseller in '87. They all followed the template that book set with the creepy same font, half circle moon, and vanishing point perspective, thanks to artist Rowena Morrill. All out of print today, these later editions were staples of many a horror fiction bookshelf. Just not mine, however. 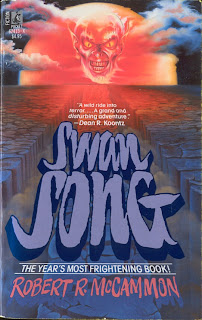 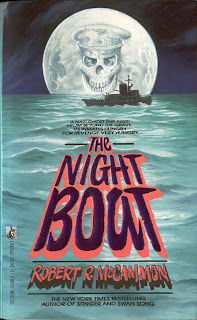 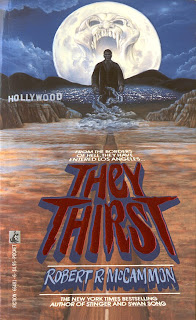 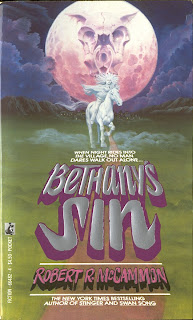 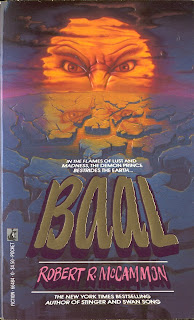 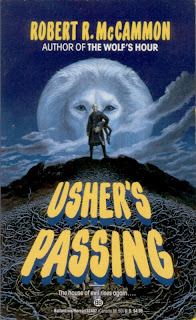 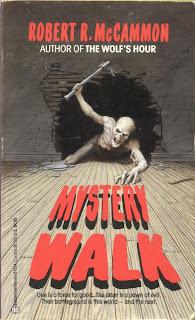 Posted by Will Errickson at 3:45 PM

I agree that the original cover for Night Boat is the best of the lot. I love how the title of the book casts a shadow upon itself. I disagree with your comments on the original cover for Baal since it has an undefined creepines. Plus it calls itself "A novel of unstoppable evil". Yikes!
The reissue covers for all the books are rather generic looking, and I'm not saying that the covers look alike amongst themselves but make them look like hundreds of other horror novels in their un-originality.

The lips on the original cover for "They Thirst" look like they're stuck on with plasticine. "The Night Boat" looks interesting, though.

Only book I read of McCammon's was "Boys Life". I was blown away. He's actually a pretty crazy writer.

I would probably give Night Boat a try if I ever found it. But only with that cover.

Of the first four books, I think They Thirst is the one worth tracking down (to read - they're all cool to collect).

McCammon really hit his stride with Mystery Walk and Usher's Passing (trivial note, there were at three cover variations for Mystery Walk - which can be seen here: http://www.robertmccammon.com/gallery/mystery_walk.html)

It's also interesting to note that with his return to writing (the Matthew Corbett books are excellent, BTW), he's dropped the middle initial from his name.

Will,
Years ago, as you are to McCammon, I had a similar disinterest in the work of Dan Simmons.
Back when he burst upon the scene & EVERYONE was singing his praises, I ignored the hype & resisted trying out any of his stuff until the early '90s when I picked up a copy of his SUMMER OF NIGHT.
Which I read about a chapter or so of & was completely uninterested by. So, I put it aside & wrote Simmons off. Never expecting to read anything by him. Ever.
But, about a decade or so later in 2002, I found myself with a lack of new reading material that really grabbed me, so I found myself looking back through my older TBR piles & for some reason decided to give Simmons' NIGHT another go.
And THIS time, I was immediately grabbed by it. I failed to see how in the green hell I could have possibly been so immune to it those years earlier. It made absolutely no sense to me. Because, I just devoured the novel in short order & upon completion it instantly became one of my top three favorite novels of all time.
Which, of course led me to grabbing up as many of Simmons' other books as possible & my being just about as enamored with those as I was by NIGHT. With Simmons becoming just as much of a fav novelist of mine as authors like King, Straub, Laymon & others that I'd been reading for most of my life.

So, might I suggest giving McCammon another try.
I'm a huge fan of his work & as much as it's revered by other fans & to some extent me, SWAN SONG wouldn't be the first one that I'd recommend to someone.
THOSE would be any of the following:
THEY THIRST - 'SALEM'S LOT taken to the big
city for the first time. Great stuff.
STINGER - Terrific monsterous, alien
invasion novel. A very fast paced, edge of
your seater!
And last, but NOT least, my personal fav,
USHER'S PASSING - McCammon's scariest
novel by far. IMHO an absolute classic.

Try one, I think you'll be glad you did.

I, too, like McCammon quite a bit. If you think the US Baal cover is terrible, the UK one is horrific. Virtually a bunch of charcoal scrapings on puke green.

'Night Boat' is an excellent read, as is 'They Thirst'.

The later McCammon covers, which you've included, are uneventful.

Not sure if you've seen the new British James Herbert covers, but I don't like them much at all. They make every one of his books look like a quiet ghost story. As you well know, the early ones are not. Perhaps James want them to appear to be like his later novels in order to snag people who like his current work. Not sure why these new editions are so generic.

Getting cover art right is an artform.

I have seen the recent Herbert covers and they're a yawn; your reasoning is probably correct. Weird.

I'm reading Blue World now and hope to have a review up soon.