Animals by John Skipp and Craig Spector (1993): A Bloody Disgrace 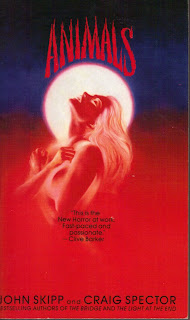 John Skipp and Craig Spector's sixth and final horror novel together, Animals (Bantam Nov 1993, cover art by Joe DeVito), is rife with the type of emotional as well as physical pain and humiliation that they explored in all their works. Despite their reputation as splatterpunks - or maybe because of - they always tried to depict realistic human relationships. Here, they delve into the psychic turmoil of 35-year-old blue-collar Syd Jarrett's divorce and its aftermath. In an out-of-the-way rundown blues bar in rural Pennsylvania, Syd meets the improbably hot and sexually ravenous Nora and his life is torn asunder. Nora is, of course, a werewolf. She wants to make him one too. But she is on the run from her ex, a sort of alpha-werewolf named Vic. What will happen when these night-time worlds collide? Surely you can guess.

But the thin, over-worn metaphor of werewolves who represent the dark, repressed nature of ourselves is expressed in tone-deaf, hey-buddy-check-this-out "prose" that seems less like writing than like two guys yelling a story at you in tandem. I don't know if Skipp and Spector had simply run their creative streak dry, were under a tight deadline, or had personal issues, or were simply bored, but virtually everything about Animals is lousy. Nora wants Syd to confront his psychological wounds caused by his ex-wife's adultery and the rage he felt to the man who cuckolded him, because that's what werewolves do: make you confront the beast within. I know horror likes to literalize its metaphors but this one is so obvious and trite and anemic it hardly registers. 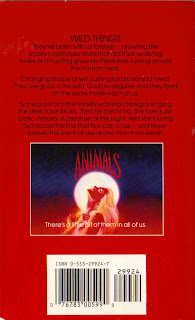 The relentlessly graphic sex and violence is approached like sniggering 13-year-old boys who've just discovered Hustler magazine and Faces of Death videotapes. Every character comes across as an utter dated dork, straight from central casting circa 1987: women wear leather bustiers and fishnet stockings; men have one earring and stubble and drink from cans of Budweiser and bottles of Wild Turkey (Nora drinks copious amounts of Southern Comfort - barf) while driving muscle cars; a bartender is a world-weary sort who's seen it all; Syd's boss is a corrupt, crooked weakling. I know these characters are working-class Pennsylvania types, maybe Skipp and Spector did some research, but it makes for underwhelming fictional companions, more The Onion's Jim Anchower than flesh-and-blood human beings.

The cliches pop up thick and fast and the puns would make Robert Bloch groan. He was hell with names, but he never forgot a face. And even if he did, hers was in the trunk. A car moves through the night like a shark through dark waters. Kisses are deep and soul-searching. Sex is the raging bone dance. Well, that last one isn't a cliche; it's a ridiculous and juvenile original. The bad guy laughs wickedly, the moment of truth arrives, and werewolf survivors lick their wounds. See what they did there? 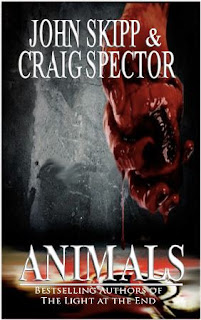 Animals was published in 1993, which was a distinct end of an era for me. I was still reading horror, but I was moving backwards toward classic writers like Machen, Jackson, le Fanu, Blackwood; modern horror was pretty much over as far as I was concerned. Bookstore shelves were more and more taken up with Koontz and King and Dell/Abyss had folded. Sure, there were a few titles I picked up here and there over the next couple years: Kathe Koja's Strange Angels and Poppy Z. Brite's Exquisite Corpse (both of which I liked) and The 37th Mandala by Marc Laidlaw (which I didn't ) but overall this was the end of keeping up with new publications.

And so I distinctly recall the publication of Animals and how I thought, "Yeah, no, I'm kinda over this stuff; besides, a werewolf novel about 'the animal in all of us'? No thanks." Even Clive Barker's encomium on the cover did little to assuage my suspicions. After I began this blog and saw that copies of the novel were going for up to $15 or $20 online, I wanted to see just what I'd missed (no, I didn't pay that much; found an oddly pristine copy in a local used bookstore). And I see that I was exactly and precisely right in my impression that the book was one long, grim, cringe-inducing horror-fiction cliche.

Guess you won't see that as a cover blurb. Sorry, guys! 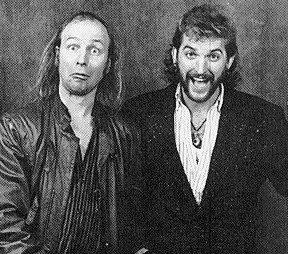 Posted by Will Errickson at 7:48 AM

Aww, that's disappointing. I saw 'female werewolf' in your description and got kind of excited :/

I have only read The Light At The End and The Clean Up but I never wanted to read Animals. Could you give me a spoiler though? Does he kill the guy who banged his wife? Skipp & Spektor always had a lot of cheesiness, especially with The Clean Up, but I felt like wading through it was worth it. Oh yeah I also read the Scream, that was cool. To be honest "The Kill Riff" by David J. Schow blew me away more than any of their books thoughs. I think he was in another league than the other splatterpunks.

No, Syd does not kill the guy who banged his wife. The Scream was fun; I reread it a few months back. Schow can be cheesy when he's doing his splatterpunk bit; when he settles down and just writes a story about people he can be quite good. As is so often, I loved The Kill Riff back in the day and am trying to find a cheap copy again to see if it still holds up.

I thought S & S wrote some good stuff early on, but ran out of steam at the end of their collaboration, as this one shows. I think The Bridge is worse than Animals.

Didn't S&S just get together again recently? Is that what The Bridge was? Have you seen the recent movie adaptation of Animals? If he doesn't kill the guy who banged his wife than that book must really suck. I am reading Seeing Red by Schow right now. I feel like half the stories are awesome and half of them suck. As an editor he is amazing though. I loved Silver Screams, one of my favorite collections ever and Elvisland by John Farris was another great one he put together. "The Kill Riff" is getting harder to find for cheap. When I bought it off Amazon in 2004 it was 99 cents but my cats tore it up. The one I bought last month was like ten bucks. Still not too bad. They are finally putting out "The Shaft" I pre ordered it off Babbage Press for about 26 I think.

Theodore, that character *does* end up dead. The Bridge is actually from 1991 and was just republished this year. I read it but recall *nothing* about it. I've been rereading Seeing Red too and plan on writing a post on it eventually. Actually I think I have a h/c of Kill Riff somewhere, now that I think about it, probably at my parents'.

Yeah, The Bridge, what a disappointment. I mean, has there ever been a more perfect set-up for an all-out splatterpunk apocalyptic extravaganzea, that was screwed up as spectacularly as in this book? Really, beyond the initial idea I don't think either of them had any idea where they were going with this book, and it shows. Boy does it show.

I read The Scream and A Light at the End by Skipp & Spector back in the day and liked them both. If I had been aware of this novel back then I would have certainly bought it because:
a) it's a werewolf novel.
b) there's a semi nude chick on the cover
c) there's a Clive Barker cover blurb.

Speaking of Spector and Skipp and The Bridge... I just finished The Bridge and I really dug it. The problem is that it is so effectively hopeless that I have been depressed for the last 3 days since I finished it. Honestly, there is this dread creeping around me. Yikes! I guess that's the sign of a good horror novel.