The Vampire Tapestry by Suzy McKee Charnas (1980): Vampire Walks into a Psychiatrist's Office... 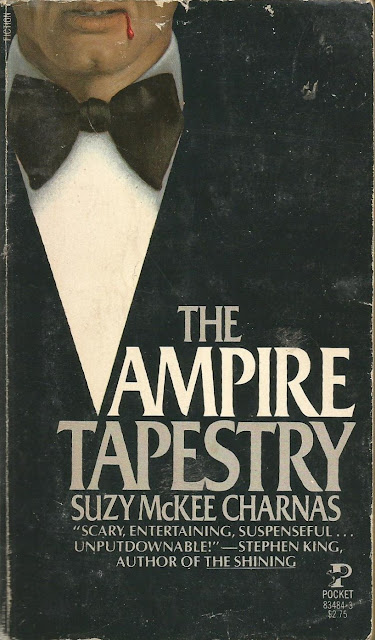 Today it's almost tiresome to ponder the mythic fluidity of the vampire throughout history and how it reflects (heh) the fantasies and fears of the culture from which it's sprung. Vampires have been twisted this way and that, rendered fangless and impotent, but when Suzy McKee Charnas wrote The Vampire Tapestry in the late 1970s the field had not yet been taken over by the de- and re-mythologizing character of Anne Rice's work. Less a horror novel than a psychological deconstruction of an outsider, Tapestry has a smart and original tale to tell, thankfully unblighted by the shallow vagaries of popular culture. Indeed, this vampire haunts the halls of academe. 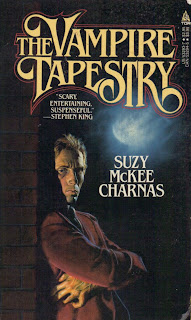 Dr. Edward Lewis Weyland is an anthropology professor of a gentlemanly, iron-haired age as well as a non-supernatural vampire. Drawn as a ruthless and precise predator, he has no kith or kin, walks about in daylight, and needs no earth from his homeland in which to sleep. Beneath his tongue is an unobtrusive stinger with anti-clotting saliva that can penetrate human flesh and draw out fresh blood. His haughty and surly brilliance allows him to pass through the mortal world with few noticing his true self. 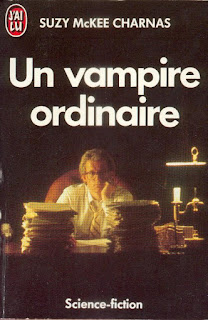 Through five long chapters, we see how Weyland subtly alters his behavior to either escape danger, establish his identity, or to embrace a victim. Actually Tapestry is more like five interrelated stories than one entire novel. Weyland sometimes missteps and ends up in danger, as in "The Island of Lost Content." He meets a near-worthy foe in "The Last of Dr. Weyland" and reappraises his thoughts of humanity (Not cattle, these; they deserved more from him than disdain). "A Musical Interlude" finds Weyland shaken after he is introduced to Puccini's opera Tosca, the high drama of which causes him to flash back to his own life centuries earlier. 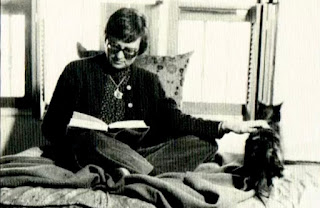 Charnas in 1980
The best section I think is “Unicorn Tapestry,” in which Weyland is forced to see a psychiatrist in order to keep his job as a professor and thus hide his vampirism. This psychiatrist tries to get Weyland to empathize with his victims, which he refuses to do. Charnas spends a great deal of time detailing the work of this doctor, a middle-aged woman who, in spite of herself, develops serious feelings for Weyland even as she delves deeper into his pathology.


Endurance: huge rich cloak of time flows back from his shoulders like wings of a dark angel. All springs from, elaborates, the single dark primary condition: he is a predator who subsists on human blood. Harmony, strength, clarity, magnificence - all from that basic animal integrity. Of course I long for all that... 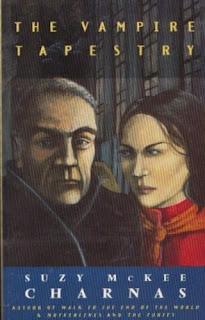 We can see the changes in vampire mythology just by tracing the imagery in the paperback covers. The original paperback edition at the very top, from Pocket Books in 1981, hearkens back to Lugosi's dinner-party attire, along with a strong, masculine jaw to suggest the eroticism that was so prevalent in the myth at the time. In 1986, with the Tor Books reprint (labeled oddly as SF/Fantasy), we see now a brooding, more European-looking fellow whose hand seems tensed and rigid; after Rice, the deluge of sensitive vampires mooning over their horrible undeath and blood thirst. The French paperback from 1988 highlights the near-banality of a modern vampire. A '90s edition from The Women's Press, above, with a woman—the psychiatrist, of course—casting a penetrating gaze upon Weyland, is my favorite. 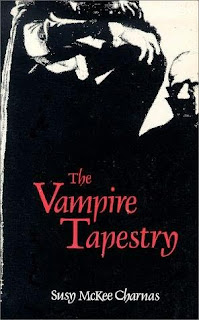 The 1992 trade paperback cover has a figure clad in a cape, apparently about to perform some bit of magic like Barbara Eden in "I Dream of Jeannie," and also is somehow deformed. The most recent edition, from Orb Books in 2008, with its bare tree limbs and shadowy figure, seems more like a Halloween decoration than a real book cover. Besides the edition from The Women's Press, none of these covers captures the tone or style of Charnas's book, which is rooted in the psychological realism of a fantastical nonhuman. 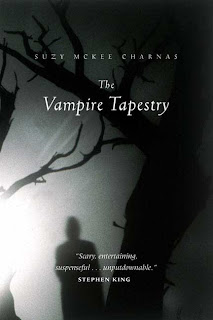 Horror fiction has always suffered under a surfeit of bloodsuckers stalking across paperback book covers where they were depicted as aristocrats or lusty dandies, as well as Stoker-approved monsters from the Freudian id. Today, we see them as teenagers, as Fabio-style paranormal lovers, as lonely housewife-friendly boyfriends. It's a cliche to ponder this creature, as I noted, even trite, because isn't it obvious? We have met the vampire over and over and he is us. But Charnas suggests at the end of The Vampire Tapestry that this predator who tries so hard to gain psychological distance from his prey may come to see some of himself there after all.
Posted by Will Errickson at 5:55 PM

I remember reading "Unicorn Tapestry" in a vampire-themed anthology, way back when. I remember thinking I was not going to like it, but it pulled me in. You know you have a good story when its vaunting length evaporates under your greedy eyes.

Since vampire fiction is probably my favorite form of entertainment I'd disagree with the satement that "Horror fiction has always SUFFERED under a surfeit of bloodsuckers." I'd pit a vampire flick against chain-saw massacres stories ANY DAY (the plot in your usual vampire tale tends to be more engrossing, in my opinion, than in other forms of horror). :-D

*Even still ... I wanted to say "nice site" you have here. Wanted to let you know I stopped by to see what terrorizing was all about. Glad I stopped.

Lazlo - indeed. There were moments when Tapestry dragged a bit but it was mostly a very good read. Not scary, but good.

Vamchoir - "terrorizing" yes! Ha. By "suffered" I simply meant all the cliched vampire imagery on paperbacks that didn't due the novel itself justice. Thanks for checking us out!

The description you gave of this book reminded me of "Vampire Junction" by S.P. Somtow. It's another tale that involves a member of the Nosferatu, in this case a 12-year-old boy, who seeks the aid of a head shrinker in order to come to grips with the idea that he may not actually be a living archetype as he once thought but may be more closer to the human race. It's filled with lots of ideas of humans and vampires reflecting each other, fated timelines, and what not. I enjoyed that one enough, and would like to take a look at this book to compare the two if anything. You are right about one thing-- I feel that vamps are the stock horror characters that have just about been exhausted over all other sub-genres.

Just picked up a pristine copy of the Pocket version at the top for a buck at a used bookstore near the Financial District in Boston. After readign your review, I might even read it!