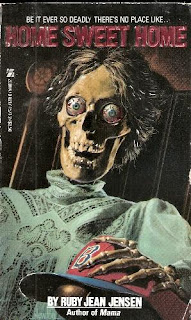 I haven't read word one of Ruby Jean Jensen's paperback original horror novels of the 1980s, published by Zebra Books (Z for dead last) and I probably won't ever. But I have to give props to whoever was doing her book covers back in the day because these are some freaky and unsettling images. I think my favorite is the above Home Sweet Home (ugh, really?) from 1985, which adds some bloodshot eyeballs to one-up Mrs. Bates. And boy do I love skulls with hair! Thanks be to artist Richard Newton for this one. 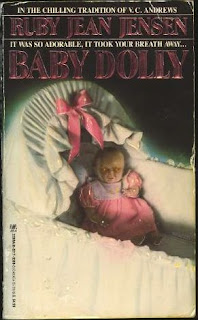 Baby Dolly (1991) Evil babies and dolls! They were everywhere in this era. But of course. The delightful Little Miss Zombie has a review here. 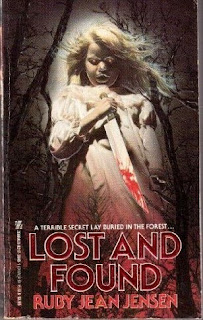 Lost and Found (1990) Another staple of '80s horror, the utterly generic title. I kinda like this cover, actually. Is she an albino or a statue come to life? Who knows but I find the pinpoints of light for eyes wonderfully malevolent. 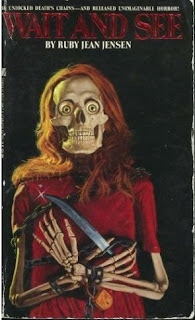 Wait and See (1986) Gotdamn you have to admit eyeballs in skulls are effin' terrifying. But the hair overplays the hand, as it were. You just gotta laugh, right? Right? 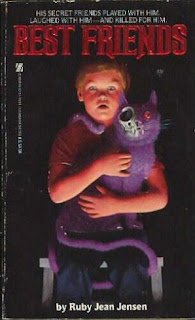 Best Friends (1985) Now we even have animal skulls. I heard this in my head as a kid would say it, Best Fwends. I think a very young Andy Richter modeled for this one. 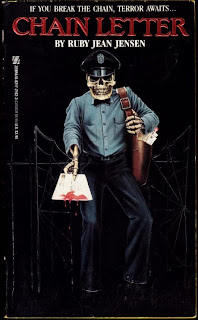 With a glorious cover by David Mann, the 1987 novel Chain Letter reminds me of a story I wrote when I was 12 about a newspaper boy who gets run over by a drunk driver; the driver rushes home without reporting the accident and tries to shrug it off, doesn't report the crime. Of course said drunk driver is also a subscriber to the newspaper so he's awakened later that night when his doorbell rings and he answers it to find.... well, you figure it out. 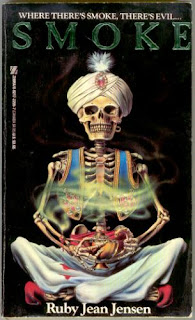 Smoke (1987) leaves me pretty underwhelmed because that's not really smoke, is it? It's like a green fog that will turn into a genie any minute. At least the artist, Mann again, is reading the books he's designing the covers for. 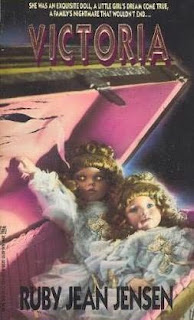 Yes, they're utterly ridiculous and anyone over the age of 13 caught reading one should die of embarrassment but they really capture the essence of paperback horror originals that took up so much rack space in bookstores, drugstores, grocery checkout lanes (I can still recall one of a skeleton kid on a trike with a shiver), only to turn up at yard sales and thrift stores worn out and ready to fall apart. Undiscerning readers would trade these in for credit at the used bookstore I worked at and yes, I looked down my nose upon them while I eagerly devoured the latest King, Barker, Kathe Koja, Skipp and Spector, Brian Hodge, Joe Lansdale, Hot Blood, Borderlands, or Splatterpunks anthology. Snob, you say? Who, moi?
Posted by Will Errickson at 2:37 PM

Hahaha. I have Home Sweet Home, but I love the tagline for Smoke:

Does that mean there's evil smoke?

You know, I noticed that too and couldn't quite come up with a quip for it. Thanks!

I used to see these novels at my local news agency and was attracted by the covers. But every time I'd flip open the book and read a sentence or two, I'd put it back on the shelf. Wonder what the cover artist is doing now.

Very funny comments
I actually own most of her books and have read them all, I find them almost adorably disturbing, coming from such a lovely grandmotherly looking old lady...also, she has a knack for whacking off principal characters midway, so you never know who'd make it through

I actually own all her books except a few of the titles from the 70's. I read many of them back in the 80's when I was kid. Maybe that's why I'm so messed up now...LoL.

"Victoria" scared the crap out of me in elementary school. I had bad dreams all summer. I think I'd only own it now for sentimental reasons.

I, too, was attracted to the covers back in the day...especially "House of Illusion" with its hologram cover. A friend sent me two of the books--"Vampire Child" (I think that's the title--features the profile of a fanged teen in a leather jacket with a bat and the wourd "vampire" across the back of it) and "House of Illusions" for Halloween this past year. I read "House of Illusions"...and it was pretty bad (I was so disappointed). I am now reading the "Vampire" title and... Well, it's very rare for me to ever NOT finish a book even if they suck. This book is so painfully awful I really WOULD put it aside and not bother reading it---except it was a gift. I feel I MUST read it (but also have to wonder why my "friend" gave me such craptastic books?). I know somewhere in my piles of books waiting to be read I also have RJJ's "Mama" (a creepy doll with one eye on the cover as I recall), but judging by the two turds I've read/am reading, I will more than likely PASS on Mama (like the publisher should have passed on Jensen). UGH! AVOID the novels--but the cover art is groovy ghoulie cool!

When I was a small child living in the Ozarks I remember going to the outhouse before bed with older ladies of our family and it was a time for story telling, especially ghost stories. Next to my Grandmother, my first cousin Ruby Jean was the best story teller of them all.
It still amazes me where all these horror stories came from. Ruby Jean is the gentlest, kindest person I know. She loves children, animals and all living creatures (she even live catches mice and turns them loose).
Ruby began writing for love magazines. I believe her first book was about prohibition and the running of whiskey in the Ozarks and my Dad said it was the funniest thing he ever read BUT no one would publish it!
The publishers only wanted her horror stories. So sad, she had so much more to share.
Back in the day when stories were from word of mouth and imaginations flourished and were encouraged in school are becoming a thing of the past.
Some of Ruby's books are even too scary for me but I "love" her imagination knowing she is a real genteel southern sweetheart.

Anon, thank you for the lovely personal remembrance! Horror writers are usually some of the sanest and most normal people around...

Stumbled here by accident but I have to confess my love for Ruby Jean Jensen's books when I was a teen in the 80s. It started with "Mama" and continued all the way until she stopped writing (or stopped getting published.) "Home Sweet Home" was my favorite - and I definitely offended a lot of people by bringing that one to school and reading it during study hall. I did wonder if her later titles were ghost-written. I definitely enjoyed a lot of her early works but her later novels didn't have quite the same magic. Maybe it was just me getting older. Or maybe there are only so many killer doll books you can read without getting bored. Thanks for the personal memories, anonymous. I too wondered how such a sweet little old lady could come up with the horrors she did.

I've Never Seen These Around. At Any Libraries In Any State I've Lived In. There Has Only Only Only Ever Been R. L. Stine Or Christopher Pike. Maybe Books Like These Were Out Of Favor Or Print In The Decade I Grew Up In.

it was inevitable, I suppose, that our hack horror filmmakers would stumble across her ANNABELLE (or some other...SMOKE and THE HAUNTING might need new titles, though) and film it...

I read House of Illusions when I was 11 and I am forever terrified of clowns. I thought Stephen King's "It" was scary. But no. For at least a month after reading that book, any time I heard the chime of a bell I wold stop every thing and wait for those damn clowns. I just knew they were real. Lol!

Also, I was very disappointed with the ending. Broke my heart!