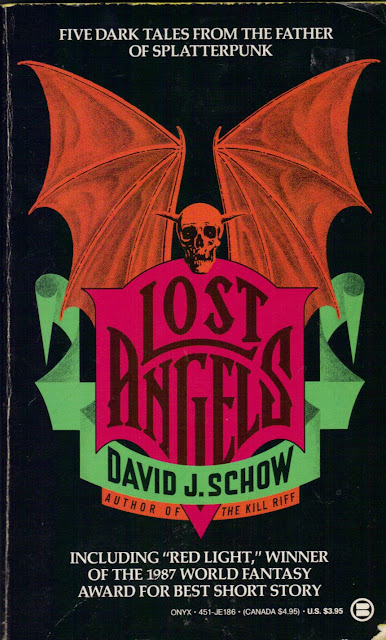 Despite David J. Schow's reputation in the late 1980s as a young horror writer who could gross out readers and critics at 10 paces with tales of pustular zombies redolent of rot and gore, the longish stories of Lost Angels (Onyx/Mar 1990) are anything but. The five stories in this collection are filled with true-to-life details about relationships romantic and platonic, fables about city life and industry careers and urban societal pressures. But in slips just a touch, just a bare breath of the weird or the satanic, something arcane yet organic that butts up against all that steel and glass and marble and silk and black leather of Los Angeles near the end of the century. 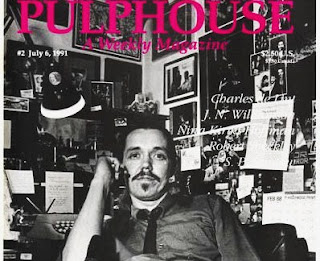 Yep, though Schow himself jokingly coined the term "splatterpunk" which defined a whole subgenre of horror from about 1986 to 1995, he is actually most adept at thoughtful works, maybe verbally manic and overwrought and a bit too self-consciously hip (well, '80s hip anyway, which is kind of awkward), but more concerned with basic human conflict rather than supernatural doings. Any such goings-on tend to be abstract metaphors for the elusive qualities of friendship, loyalty, honor, betrayal, identity, sex, and love - very much in the style of Harlan Ellison circa Strange Wine (1978) or Shatterday (1980), I realized upon this rereading: modern guys, often broken, often clueless for all their state-of-the-art status trappings, dodging the landmines of contemporary sexual politics. You wouldn't know it from the weird neon biker imagery on the 1990 cover, however.

The lead-off story, "Red Light," is, as you can see from the cover above, an 1987 award-winning tale set San Francisco and not originally intended to be part of this LA-based collection. The central conceit - that fame devours - is certainly timeworn by today's paparazzi-dazzled media, but the carefully detailed setting and relationship between the photographer narrator and his long-lost love win out. I believe the story it's referencing is Robert Bloch's "The Model," or maybe Fritz Lieber's "The Girl with Hungry Eyes." 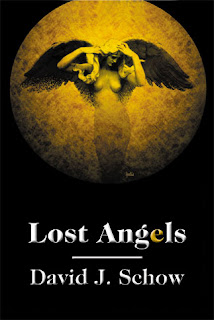 The grim sexual underbelly of Hollywood and fellows like Aleister Crowley form "Brass." It's always awkward learning about your parents' sex life. When you find out your father was part of a sybaritic cult then consorted with demons and now one may be after you in the form of a brilliant and gorgeous soulmate? Chilling. "Falling Man," despite its director main character and behind-the-scenes glimpses of TV production, which I usually like, unfortunately overstays its welcome at over 60 pages. "Pamela's Get" was just a little too oblique for me but has a nicely realistic depiction of female friendship at its core. "Monster Movies" sweetly finishes the collection and pays reverence to the child in the man, the one who worshiped at the late-night TV altar of The Mummy and The Creature but who may have lost his faith as an adult in the corporate world and happy-hour martini bars.

While it hits some false notes - particularly in its hyper-verbal dialogue, which is sometimes cringeworthy in its affectedness - and seems at times like it's perhaps just playing grown-up, Lost Angels is a worthy collection from the era; Schow's got a knack for realism as well as fantasy. Nothing really scary here, except for dreams deferred and hopes lost and loves betrayed. Nah, those things aren't scary at all.
Posted by Will Errickson at 8:40 AM