The Nightwalker by Thomas Tessier (1979): The Howling Beast on the Borderline

In a way, The Nightwalker is the best werewolf novel in which the werewolf never appears. Or does it? A slim read at 200 pages, Thomas Tessier's second novel is deceptively complex and thoughtful. It depicts a young Vietnam vet who succumbs to unbidden violent desires: but are these desires the result of supernatural lycanthropy, or simply (well, as simply as these things ever are) homicidal bloodthirst and rage, purely natural?

Bobby Ives is an American living in London in the late 1970s, plagued by migraines and memories of Vietnam. While in Hyde Park one day he has an intense hallucination of becoming a zombie (not the cannibal kind) on the island of Guadelupe in the West Indies. He tells this story to his English girlfriend Annie, and also about an incident in Vietnam in which he shot a young Vietnamese girl. He also relates how a soldier also named Bobby Ives is killed  in the war, but the army thinks it's our Bobby Ives that died. With these types of memories swirling in his subconscious, Tessier intimates, Bobby seems psychologically predisposed to some sort of mental breakdown. When Annie is killed suddenly, he wonders if he is responsible and, strangely, goes to see a clairvoyant. Yeah... she's got some bad news for him. Real bad.

Improbably he picks up a runaway punk girl in a park and takes her back to his flat. Improbably until she reveals she's having her period. I suppose you can guess what follows - or maybe you can't. When she takes Bobby down to a dingy punk club, Tessier gets good metaphoric mileage out of the scene. The whole time, however, Bobby's distress at his symptoms comes and goes; some moments he wishes to embrace his predatory new nature as a logical step in his life, while others, he is truly fearful and guilt-stricken at his terrifying capacity for evil. Perhaps he can even control it...


The black hole he was flying into was sick, morbid, cruel and murderous. It couldn't go on; it had to end, full stop, forever. Not just for this lifetime. He wanted to disintegrate into scattered atoms that would never again reform as a conscious entity. It's not my fault, Ives almost said aloud... 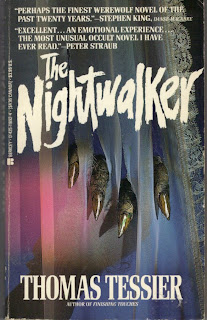 Tessier's approach is believably psychological, and he inserts ambiguous moments throughout and has an interesting discourse on lycanthropy in history from the clairvoyant. This ambiguity can be seen on the cover of the original 1981 paperback from Signet, top, but by the late '80s when The Nightwalker was republished after Tessier had gained more of a name for himself, all doubt is removed in order, I suppose, to trick the potential book-buyer. Same goes for the latest paperback cover, which makes it look like a paranormal romance. Sucks, because if someone is expecting An American Werewolf in London-style horror novel or, I don't know, an erotic wolfman, they're not gonna get it. Solidly written and containing vivid passages of grungy sex and violence, The Nightwalker is another worthwhile and original work from the underrated Tessier. 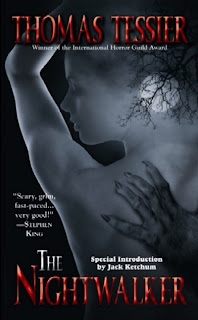 A very neat-looking novel. I absolutely love werewolf stories, and it's especially fun when the afflicted victim has doubts as to whether it's genuine supernatural hoodoo at work or just a case of the crazies. I think that psychological depth is one reason I prefer werewolves to those other nightwalkers...

The plot seems reminiscent of the Bob Clark film "Deathdream" (or "Dead Of Night" to some). Mentally wounded Nam vet returns with monstrous proclivities attached. Although that one went down the vampiric path, it's a damn fine film and I highly recommend it if you haven't already seen it.

Thanks, Joe. I think you'd really like this one. Apparently the new edition has some short stories included. And yes, I think Deathdream was pretty cool.

Hi Will. Thanks for your thoughtful and generous comments on my novels THE NIGHTWALKER and FINISHING TOUCHES. Minor correction: that wasn't the Pan UK pb cover of NIGHTWALKER, it was a point-of-sale poster they gave out for promotional purposes -- but yes, hilarious; I'm amazed you found it. I also liked the fact that you made the intended connection with the name Ravachol in FT. Joe, thanks, I'd never heard of the Bob Clark film until I read your comment, but now I'll look for it.

Sweet Jesus, that last cover is shamefully bad. No wonder nobody is buying books anymore if they're being marketed like that nowadays, with an absolute minimum of artistry and a maximum of crass commercial tackiness. One of the few cool-sounding, adult-oriented horror novels in print today and they've made it look like Jackie Collins meets Teen Wolf. They should sell crap like that in a cheese shop, it's so embarrassingly kitschy.

Just an fyi, I gave you an award! http://opinionsofawolf.wordpress.com/2010/08/31/one-lovely-blog-award/

Mr. Tessier, thanks for stopping by. I do plan on reviewing more of your work as I read it. I also appreciated the sly Dylan references throughout both novels.

Anon, yes; indeed a large impetus for me starting this blog was my disgust--not in the good way--at the *lame* cheese factor of most mass market horror novel covers.

Amanda, thank you so much!

Decisions, decisions, dicisions, there's a copy on Ebay over here and it's running out in two hours and no ones bidding! Is it worth and Euro($1.30)? It has a cover that you don't have here.

Go ahead & grab it will ya can! Hope to see the cover sometime.

Again another case where my googling searches (in this case i searched for "scariest books ever" and found this at number 1 on a particular list) and promptly ordered it off better world books. Now, googling The Nightwalker I once again come upon your site lol. Btw, for lack of a better word, I find it awesome that the actual author dropped by and left a comment. I have hardly any experience with werewolf fiction and am soooo looking forward to this story. Just in case your wondering, my papaerback is the last copy shown (woman on cover) that also includes a novella.

I forgot to mention, the first picture of this book (with the dark face and blood at the lips looks extremely like an early edition of Salem's Lot that I have. Wonder if there's any connection?

Only connection I think is that black/red imagery can be quite striking on bookstore racks in which publishers are competing hard for that customer dollar!

Started this last night, another new-to-me author-that-I-should-have-read-already!
I have the Pan 1st ed, with a very nice cover, complete with Stephen King quote. Can send you a scan if you want to add it?

...and, it was superb! Deadly serious, as grim as f*@k, but still very entertaining. Need to read more Tessier.

For me, a tad more impressive than it was enjoyable (i.e., fun), but still an innovative and well-written take on a common idea.