The Nature of the Beast by Peter Menegas (1975): Pagan Babies 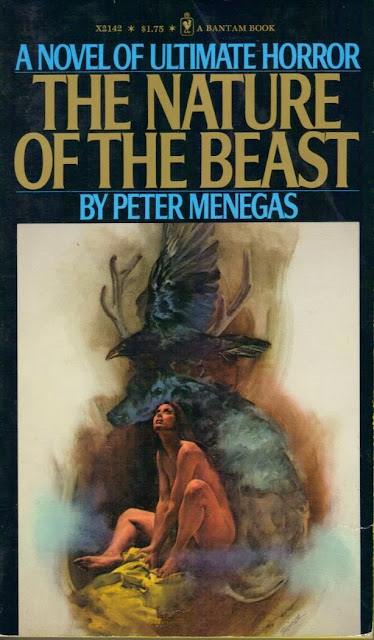 More quiet, slow-building, and low-impact "horror" fiction from the days before Stephen King and James Herbert made their presences known. The Nature of the Beast, a paperback original from Bantam by an utterly obscure author named Peter Menegas, about whom I could find nothing (really, Google him) is a fine example of vintage horror cover art by Fred Pfeiffer. What with its nudity and animal imagery, this just screams post-hippy alternative spirituality or some such nonsense. You know, like The Wicker Man or Harvest Home, or the crap changes made to Lovecraft's classic "The Dunwich Horror" for its movie adaptation. There are hints of Ira Levin's Rosemary's Baby as well as Peter Straub's first horror novel, Julia: women and children with distant, even cruel husbands and fathers who are endangered by supernatural powers that reveal themselves slowly, oh so slowly - I had to give up halfway on this one, honestly I just bought it for its pretty cool cover. It's blandly written, though not actively terrible, and I don't dislike the back cover description:


They are initiating her little boys into the primitive language and rituals of Celtic witchcraft. They have given her sons the gift of prophecy in exchange for perverse and inhuman acts of barbarism. Their power is more ancient than Christianity, more savage than Satanism...

But something tells me I should doubt all that will turn out to be the "ultimate horror." Strange to think pagans really were considered scarier than even Satanism (gasp! horror!) once upon a '70s time. 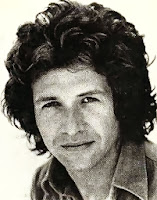 Great find. Never heard of book or author before, but this looks a little more interesting than the run-of-the-mill drugstore rack-filler. And you have to love a book with the sheer chutzpah to describe itself as A NOVEL OF ULTIMATE HORROR, at the very least it makes a nice change from today's generic run of blurbs eg THE NEW STEPHEN KING! or SPLATTERY FUN! or A MASTER OF SHOCKS!/THE MACABRE!/GORY CHILLS!/ETC.

Yes, I too could live without the endless King (or Koontz or whoever) blurbs on modern horror paperback covers. I'd like to track down more books w/ covers like this, from the early '70s, but they are a collector's delight, can go for real $ (I found this for a dollar in a bookstore) and many used bookstores don't accept such cheap old books--or hang on to them to sell on eBay for much more than half cover price.

How funny! I just posted this cover a couple days ago. http://www.retrohound.com/more-pulp-book-covers/ It's at my library in the book sale section. You can buy it for fifty cents plus shipping and I'll send it to you.

It's a funny coincidence: I actually first saw the book on your blog last week. Over the weekend I was in a used bookstore and found a copy! Wasn't even looking for it, just glanced down and there it was. I had to buy it and see what it was all about.

I found a copy of this lying on the sidewalk a couple of months ago and never got around to reading it. Now I may not be arsed. Thanks!

the cover art is by Fred Pfeiffer. As I am always looking for art by him I am glad you had a nice scan of this cover. I would like to add it to my blog if you don't mind.
please stop by sometime. http://fredpfeifferartist.blogspot.com/

Thank you very much. I like your blog and you have great taste and friends.

I came here only because I was searching for news of Peter Menegas. I'm sorry that he seems to have disappeared from view. For a few years I worked for his London hardback publisher and literary agent. Peter was a charming man, an American living in London, but I never felt that his heart was in the horror genre.

The book is very formulaic. At the time he was being nurtured (by Pan and Bantam) towards the 'big book' that people felt was somewhere in him, but hadn't yet found his voice. His portrayal of the parent/child relationship was utterly unconvincing, as I recall.

A far superior example of his work, in my view, is 'Mrs Bad Gun'. This is a Western revenge novel, which was always crying out to be made into a film. It has echoes of 'True Grit', as a Blackfoot widow rides remorselessly and stoically in search of her husband's white killers. Arguably formulaic again, of course, but far better plotted and written. I still have the musical score for it in my head; plenty of aching, desolate blues.

Back again! Peter's birth names were Lawrence Rodney, but he's still invisible as far as the interweb in concerned. His UK paperback publishers were Corgi, not Pan, Corgi being the UK end of Bantam Publishing.

I'm only Anonymous because my Wordpress profile won't register/verify, for some reason.

Hey Anon, thanks so much for the background info on Menegas.

A bit of hunting reveals more about him.

He was born 1942 and died in 1989, son of Louie Menegas and Helen Lotz. Went to Gonzaga Prep School Spokane WA. Was a friend of Anjelica's mother Ricy Soma. Anjelica in her book “A Story Lately Told: Coming of Age in Ireland, London, and New York" described him as "gay, short and lithe...with a shock of brown hair". Ricky met him through Richard Svare (an actor) who was a close friend of Ricky's friend, Morris Graves (an expressionist painter). Ricky and Peter collaborated on a proposed musical about Gertrude Stein.

Hi all.
I just wanted to give some credit to the Menegas book where due. I found it used long after it came out and was intrigued by the cover art myself. I collect these beauties too from the 60s/70s. The lost art of book illustrators ended in the S. King 80s with mass produced computer graphics used cheaply for the covers of PB novels.

I also like the quieter thrillers of the post Rosemarys Baby school. Tight little novels that usually end at 200 to 250 pgs.
While it is true that this one is formulaic, I liked its introduction -to me anyway, of a new pagan Celtic god Id never heard of as its antagonist,Cernunos! Sort of a mish-mash of a Pan/Wendigo figure. I love horror that concerns old/obscure myths and pagan deities!

Thanks for all the background info on the artist and the writer. This book has been a mystery to me for ages!

P.S. I dont know if it is the same artist or not but a similar style graces the cover of another 70s pb tome by Mary Leader called: TRIAD. Hard to find though I think .

highwayknees--I looked up the cover art for TRIAD and it seems to me likely that the artist is William A. Edwards. He is known for many Bantam paperback covers, especially the Herman Hesse titles they were putting out in the late '60s and into the '70s, as well as McCullers' HEART IS A LONELY HUNTER.

I can picture those covers and, yes that seems spot on.