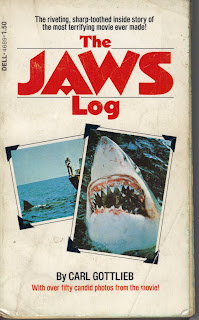 The Jaws Log, a paperback-original making-of detailing the famously tortured production of Jaws in 1974, came out just after the film hit theaters. Written by co-screenwriter and actor Carl Gottlieb (he's the reporter Meadows in the film), it's a great little book about the horrors and scattered joys of film-making, but it also is a bit of not-so-subtle hucksterism designed to sell the movie by using some carefully chosen words. Witness the back cover copy: 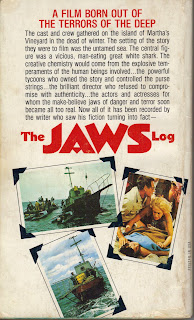 "The brilliant director who refused to compromise with authenticity!" "The jaws of danger and horror became all too real!" "The writer who saw his fiction turning into fact!" This sounds like Spielberg was ready to serve up his cast a smorgasbord. In fact, that's exactly what I thought when I spotted this book at neighborhood friend's house when I was about seven or eight. It was sitting on a kitchen counter and I was afraid to pick it up because of the gory shark's maw on the cover. Incredible. 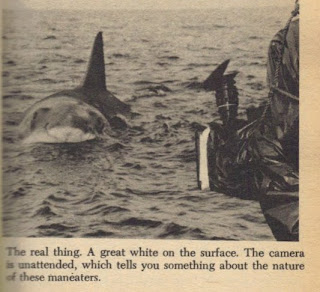 Also scattered throughout are misleading photos of Bruce the mechanical shark identified as a real great white - purportedly to confuse moviegoers. Guess I can't blame Gottlieb or whoever was involved with writing text for the photos; in 1975 people weren't quite as savvy about great white sharks as they are today, what with Air Jaws and Shark Week and now Expedition Great White. People are so shark-jaded these days.

If you can't track down a vintage paperback copy of Jaws Log, it is fortunately back in print!
Posted by Will Errickson at 6:35 AM

I used to have this one and it's a shame some of the pics in the original printing are not in the new one including the one above. There are some different pics, though.

I have the Jaws 2 Log. It recounts the horrors involved in making movies by committee.

Wow, lazlo, that thing is worth a small fortune. Does it have much on the original director, John Hancock? He got fired after a couple months because apparently he was trying to make a more "haunting" sequel, like his earlier movie Let's Scare Jessica to Death. Color me intrigued.

It has some passing references, especially in the beginning. Hancock was going for a moodier and brooding feel. Rumors were started among the crew that Hancock was taking too long and "didn't know what he was doing". The producers used this as an excuse to usher him out. Mostly what they wanted was a carbon copy of the first film, and Hancock was trying for something different.

Yep, there's a bit of that moodiness in the novelization. There's a great shot of the shark's dorsal fin gliding towards Amity at dusk in the beginning of the film; it feels like a leftover from Hancock's version.