Peter Benchley Paperbacks: The Legacy of Jaws Lives On 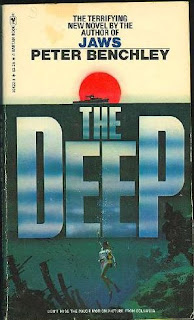 June 20th, 2010 marks the 35th anniversary of the release of the movie JAWS. This post is part of Radiation-Scarred Review's 2010 SHARKATHALON, which celebrates this milestone with blog posts around the web.
None of these quintessential '70s paperback bestsellers by Jaws author Peter Benchley could be classified as horror, but in the wake of the success of his first novel it's interesting to see how that single cover image dictated how his books would be marketed for pretty much his entire career. After my less-than-stellar experience reading Jaws, I have to say I have never read anything else by Benchley. According to Amazon, none of these titles are even in print any longer. Still, check out these awesome vintage covers and ponder their eerie if not down right ripoff similarity to Jaws.

The Deep (1976) is probably the most famous of Benchley's post Jaws works. I think it's about undersea treasure. It was made into a so-so '77 movie with Robert Shaw, Nick Nolte, and Jacqueline Bisset's nipples. 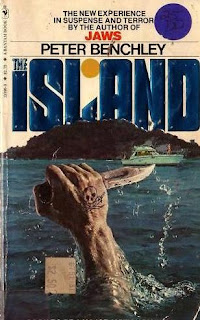 Love this cover for The Island (1979), a book I'm going to assume is about pirates who simply tattoo jolly rogers onto their hands so everybody knows who they are. Wasn't this made into a movie too? I really can't recall. Please, somebody Google. 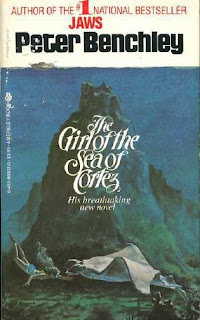 And finally, The Girl of the Sea of Cortez (1982). Even almost 10 years later Benchley is being sold on Jaws, but I guess that's to be expected. I don't know anything about this except I recall my mom reading it when it came out and enjoying it a lot. According to Wikipedia it's more of a sea fable than a suspense novel and is widely regarded as Benchley's best work.

The paperback artwork on these is pretty cool, I really dig the deep blues of them all, the ocean surfaces that seem so placid and calming but that are about to be disrupted by unseen powers from below, and that ever-present word: JAWS. I have strong memories of these books on supermarket checkout racks and on my mom's nightstand as well as at the homes of various relatives throughout the late 1970s. Summertime trips were incomplete without an accompanying cheap paperback novel; what better way to cool off at the blistering beach than with one of Benchley's chilling tales of high-seas menace and adventure? Why you're still going to the beach during the late 1970s after Jaws, though, I have no idea. Posted by Will Errickson at 8:30 AM

I read Jaws, The Deep and half of The Island, all around the age of 13. I tried to like Jaws--thought I liked even though I was stumped at how different it was from the movie--and know now that it is a pretty bad book. You just want the shark to eat everyone!

The Deep is pretty good, if I remember correctly. Doubt if I'd revisit it, but I remember liking it more than I did the film.

Interesting to hear that the Cortez book is regarded as his best work. For starters, it doesn't seem like that's saying much. But also, it's so forgotten. It'd be a shame if he actually wrote a good book and it's out of print because it's Not Jaws.

Man, it's great to see those covers again!! Thanks!

I read these as a kid and still have a soft spot for them. Even if they were technically "bad," they captured my imagination at the time, and I always watch the movies when they come on TV.

There's no doubt that Jaws was a better film than book, but you also have to give Benchley credit for coming up with the idea. And if I recall, the parts dealing with the shark alone were pretty cool.

I also think The Island had a good concept - modern day pirates living in the Bermuda Triangle.

I never read Cortez either, but now I kind of want to.

The Girl of the Sea of Cortez is actually a really great book. Should have been marketed as a "Young Adult Book"- the story of a girl from a poor fishing village who lives a secret life diving on a sea mount...her father taught her to dive, her brother hates the water...and hates her for being dad's (he's dead) favorite...

As for the Deep...it's ironic. Jaws the Movie was so much better than Jaws the book. However, if they had simply filmed "The Deep" the way Benchly had written it, it would have been a much better movie - and that's too bad, because, although Shaw was a great actor, a lot of the movies he was in are pretty bad...it would have been nice to have one more good one to remember him in.

I have read every single one of Peter Benchley's books (back in high school! I think I still have the paperbacks somewhere in storage) and I have to say that the farther he goes from the sea, the better he gets. Q Clearance (a political comedy of errors) and Rummies (a funny yet poignant look at detox clinics and the people who stay in them) are my favorite works of his.

I barely remember The Deep (something something morphine?), but I do recall The Island having some pretty brutal modern day pirates in it - and a killer ending that comes out of nowhere and neatly solves the story's conflict in one fell swoop. The Girl of the Sea of Cortez confused me because I was expecting violence and/or horrors and I got... Something else.

Benchley had two more monster books in him after his non-sea stories: Beast (GIANT SQUID!) and White Shark (NAZI SHARKMAN!). They weren't bad but at that point, he was getting a tad formulaic.