Bloodright by Peter Tremayne (1977): I Love the Nightlife 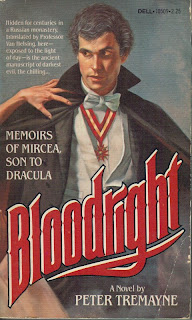 Dracula and vampires in general went through some re-mythologizing in the 1970s and early 1980s. Stephen King, Anne Rice, Suzy McKee Charnas, Fred Saberhagen, Michael Talbot, Les Daniels, Tanith Lee, and George R.R. Martin were all writing well-regarded vampire novels, Bram Stoker virtually forgotten. In movies you had Frank Langella and Klaus Kinski (my favorite Dracula of the era? George Hamilton). This title I was totally unfamiliar with. Here, on the cover of Peter Tremayne's Bloodright (titled Dracula Unborn in his native England) you can see him in the traditional opera-cape getup that dates back to Lugosi's theatrical performances on the 1920s, along with the Dracul family crest medallion on his chest. Very old-school.

But check out the actual dude: with his thick wavy hair and chiseled features, he could have stepped from the pages of Playgirl or a daytime soap! I guess he's Dracula's son, going by the tagline. I love the swooning oh-so-'70s woman in her nightgown and its strap just so; on the spine of the book you can see she's clutching her diary. Was she professing her secret desires for Dracula, or simply writing her own vampire tale? If not, she's got one to tell now. 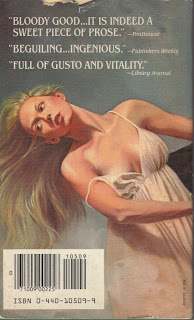 Didn't know the guy wrote about vampires. I was searching for more info about him, considering his book "Zombies" and found you.

Vampires is not at all like in the movies or books. Sure, I understand. You are young; you have the whole world open to you. You can be anything that you choose if you apply yourself and try hard to work toward that goal. But being a vampire is not what it seems like. It’s a life full of good, and amazing things. We are as human as you are.. It’s not what you are that counts, but how you choose to be. Do you want a life full of interesting things? Do you want to have power and influence over others? To be charming and desirable? To have wealth, health, and longevity? contact the vampires creed today via email, worldofvampir@hotmail.com