All Heads Turn When the Hunt Goes By by John Farris (1977): At Play in the Fields of Freud 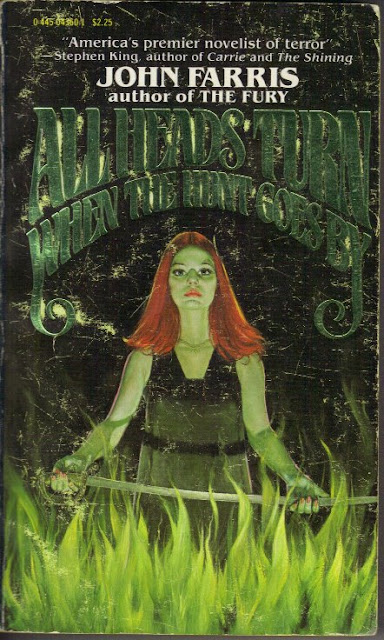 I originally read John Farris's All Heads Turn When the Hunt Goes By in the summer of 1989-- fresh out of high school, working at a used bookstore--but years later, recalled virtually nothing of it, so it was one of the first vintage horror paperbacks I bought again for this blog. Even though I was unimpressed with and did not finish his 1976 psychic spies bestseller The Fury, I was keen on revisiting All Heads Turn. Good decision; I could hardly put it down this past weekend! 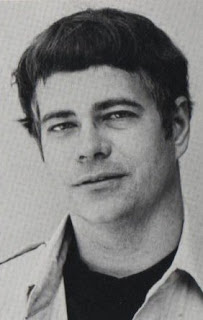 This is mainstream bestselling horror at its finest: wholly entertaining and gripping, a horror fiction melange of classic adventure tales, multi-generational family sagas, Southern Gothics, and even those horribly dated "plantation novels," all to great effect. Even more astounding, perhaps, is that this Popular Library 1977 paperback cover is actually representative of events in the novel. The 1986 reprint from the Tor horror line, however, is one big spoiler. So do not Google it (but do check out this encomium from David J. Schow, who chose it as his entry in Horror: 100 Best Books).

Set during World War II, Farris has threaded together the fates of two great families, one from the States and one from England. The Bradwins are one of those wealthy Southern families made by generations of virile military men - and their servants barely more than slaves - plagued by arrogance, entitlement, brilliance, lechery, and charm in maddeningly equal measures. The Holleys are a British family who travel to Africa to administer health care to the remotest regions of that continent. Their unbelievably tragic back-stories are the most richly imagined parts of the book.

Farris settles in and moves his story along, writing smoothly and professionally, always a welcome surprise in what looks to be another junky horror paperback - albeit one with an oddly poetic and tantalizingly obscure title. Farris's prose is even impressionistic at times, once the delirium of horror and bloodshed begin. Which is, thankfully enough, just a few pages in, careening out of the gate with a blood-drenched military wedding ceremony in Virginia. Hot damn!

A flick of his wrist and slight thrust and the level blade went right through Corrie's veil and the column of her throat inches beneath her raised chin. Then the veil behind her head filled as if inflated by a gust of air, a backward breath, and I saw the elegant tip of the wetted blade holding the veil away from her nape for an instant before Clipper retracted it... 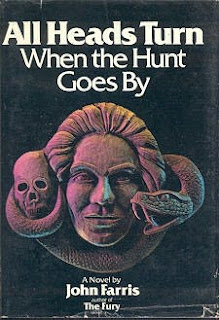 They are linked by the beautiful Nhora, a woman who, as a child, was kidnapped by a cannibalistic African tribe beholden to the superstitions of voodoo, that twining tight of the Christianity of the west and the native beliefs of Africa. So cultural imperialism figures large, the privilege and entitlement that people can feel when dealing with others they think may be beneath them, even when the others are members of one's own family. But all people are weakened by fear and greed and superstition - especially when that superstition turns out to be the truth. 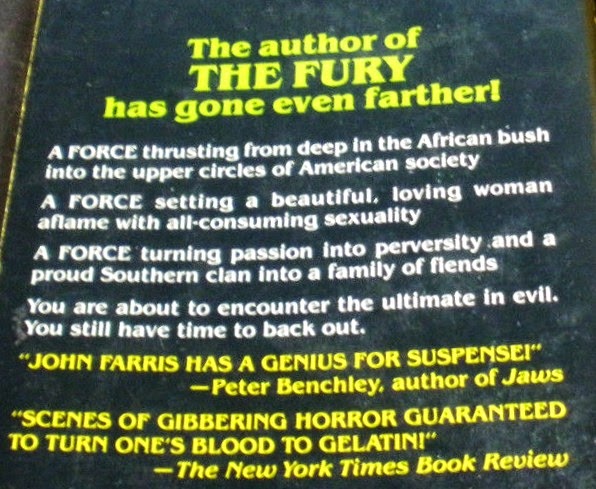 All Heads Turn might fit that oft-sought category of a forgotten classic; Farris is that successful both in concept and execution. From the endless tormenting rains in the wilds of Africa to the sultry evenings on a Southern plantation, from a near-madhouse in the English countryside to the hideous visions of symbolic dementia, Farris never falters in bringing it all to palpable life. Characters, even minor ones (the fingernail-less bomb expert Luxton; self-regarding patriarch Boss Bradwin; Boss's illegitimate half-black highly educated son Tyrone), arrive fully-formed even if flawed or broken. Especially if flawed or broken. 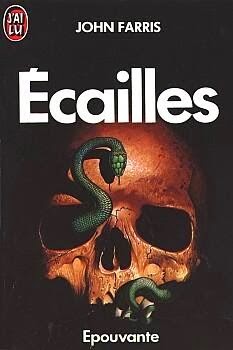 Farris's evocation of the supernatural, a sort of Freudian/voodoo stew of myth, monsters, and magic, is wonderfully tasteless, primeval, and exotic; his depiction of fathers and sons beleaguered by ego and ignorance, believable. The attentive reader will notice an aside to several writers and poets (Haggard, Keats, Ovid) that explains much. And if some think this all gets wrapped up a mite quickly, then I have to say I prefer that to an ending that goes on for 50, 75, 100 pages and exhausts the reader's patience. Farris bring the story to a screeching shuddering sudden halt at the climax, a climax that speaks of the truly venomous nature of obsession, desire, and fear. Oh, and snakes. Why'd it have to be snakes? You'll see.

Posted by Will Errickson at 6:00 AM

I read Phantom Nights several years ago and loved it. I need to track down some of his older stuff on Amazon.

I have Son of Endless Night on the shelf with a great cheesy cover; although it's over 600 pages, after this novel I'm more excited about reading it.

There was an interview in the old TWILIGHT ZONE magazine with John Farris. He remarked as to how his niece saw one of her summer camp counselors reading one of his novels. When she told the counselor that it was her "Uncle John's" book, she was told, "Oh, I guess you've read them all." The niece then informed the counselor that she wasn't allowed to read any of her Uncle John's books.

Thanks for this review. I started All Heads... some time ago but put it down in favor of others. Now I feel I must pick it back up.

This one sounds pretty good. I can't wait to give it a try.

I'm a long time fan of Mr. Farris work. And by all means read everything of his you can get your hands on! I've made the effort to seek them all out and was WELL rewarded! My favorites being the formentioned,SON OF THE ENDLESS NIGHT,WILDWOOD,and FIENDS. Funny though, the only one I couldn't finish and was bored by was his mostr famous-THE FURY! (Though i do like the movie version cheesiness!)

Will,
I'm curious, did you ever get around to reading SON OF THE ENDLESS NIGHT?
If not, I highly recommend it.
It's one of those rare novels that genuinely creeped me out while I was reading it. Which, I'm sure you know all to well as a lifelong genre reader yourself is much too difficult to come by. A book that you know is not just SUPPOSED to be scary, but actually IS scary...

Not as scary, but disturbing & crazy suspenseful in it's own right is Farris' SACRIFICE. Which is a quick, damn near one sitting novel that will definitely leave an impression.

Sounds good. Haven't gotten to it yet but...

Any readers still trying to find this book and have stepped up to the Kindle generation, Farris just published it as an eBook for 3.99 in June 2012.

Crossroads press has just released my new recording of "All Heads Turn" as an 11 hour 9 minute audiobook on iTunes and at Audible.com and Amazon.com. Please help spread the word!

This is the first I’ve read by Farris. Are they all like this? To use a phrase I learned from this blog, I always got the impression that he was just as much a housewife-horror purveyor as John Saul. “All Heads Turn…” certainly disabused me of that notion, though.

So, yeah, I can see why it’s considered a cult classic… even if I was admittedly confused at times.

His writing is strong and evocative, like he actually pays attention to real people in real life--you know, like an actual honest-to-god writer. Even when I haven't really enjoyed the story of one of his novels (THE FURY and CATACOMBS) his writing is several quality steps above most horror fiction of its era.

Picked up All Heads Turn and Son of the Endless Night at Powell's this past weekend.

Thanks for pointing me towards Farris man!

Jeff, I hope you like 'em, & feel free to stop back by and lemme know what you thought.