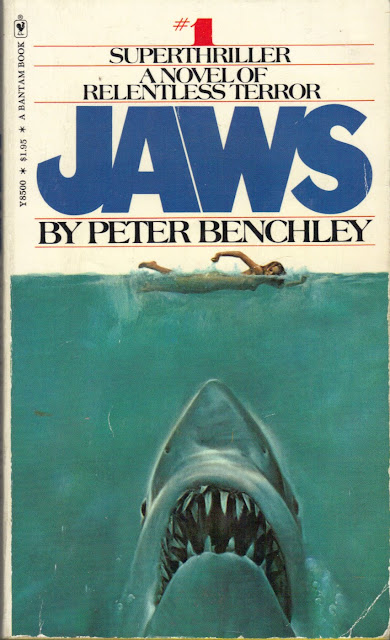 June 20th, 2010 marks the 35th anniversary of the release of the movie JAWS. This post is part of Radiation-Scarred Review's week-long 2010 SHARKATHALON, which celebrates this pop culture milestone with blog posts around the web.

Simply: Peter Benchley's bestselling novel Jaws is not a good book. Robert Shaw, Quint in the movie and a playwright and novelist himself, famously called it "a piece of shit written by a committee." On his first reading of it, Spielberg said the characters were so unlikable that he was rooting for the shark. It's tepid and ridiculous, even restrained, with tawdry aspects of The Godfather and Peyton Place thrown in - themselves no great shakes as literature - and millions who saw the film first were probably vastly disappointed upon reading it. It was a huge bestseller a year before the movie came out but I can't believe anybody thought afterward, "Well, it wasn't as good as the book!" Virtually every single thing that makes the movie great is absent from the novel. 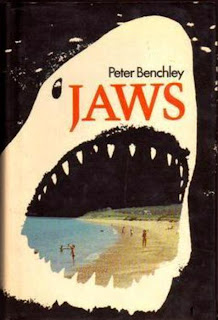 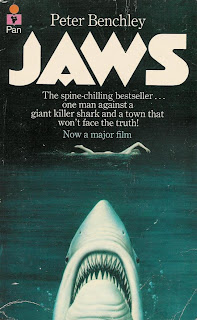 What is in the book that made it to the movie? The characters' names, the opening attack, the Kintner attack (he's even younger here), Quint's obsessive irascibility (but no USS Indianapolis), Matt Hooper's youthful enthusiasm (which comes across as douchebaggery in the novel), Vaughn's sleazy cowardice, and Brody's ambivalence about the sea. That's about it. I don't think there's one bit of dialogue that survives, although I love the bit when Hooper excitedly goes off on a tangent about megalodon:

God, "mouth full of butcher knives"! Hell yeah. Quint's line "I see your cock, you bastard!" when the shark leaps fully out of the water and exposes its claspers, man, I can totally see Shaw belting that one out. The reporter Meadows (Carl Gottlieb, co-screenwriter, in the movie) has a larger role which works believably; he's Brody's only ally in Amity. The way the shark - excuse me, the great fish, as Benchley under-whelmingly refers to it - dies is perhaps the lamest climax ever. Quint's death is also unspectacular, drowning when his foot catches in the barrel rope speared to the shark. 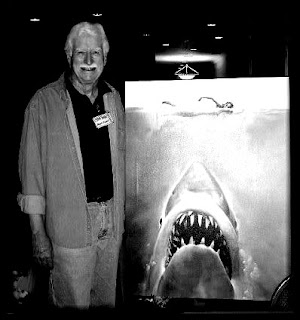 But at least the paperback edition did give us one of the most iconic pop culture images of all time - used first for the book, and then the movie poster - thanks to artist Roger Kastel. Also, I read Jaws - or at least skimmed through it looking for the shark attack scenes - when I was probably 10 or 11 and it was the first time I'd ever seen the word fuck in a book. Huh, I recall thinking, I thought the older kids in my neighborhood invented that one.
Posted by Will Errickson at 6:00 AM

If I remember correctly, Hooper was boffing Chief Brody's wife.

I remember my grandmother burning her copy of this book in a fireplace back in the mid 1970s. She was an avid reader all her life, so that tells you something right there. She literally tossed it in a fire.

This might still be lurking about at my grandmothers house somewhere.

I was 10 when the movie came out. all that summer, any time an adult was at the swimming pool, they had a copy of this book. I read it when I was 14, and in a rare reversal, found the movie much better!

Along with THE GODFATHER and PSYCHO, JAWS is the greatest book-to-film adaptation ever!

While you may be correct about the over-all quality of the writing, I vehemently disagree that the ending was anti-climatic. Unless, like Hollywood, you define climax as the All-American tradition of blowing shit up. I personally don't find explosions (in fiction or cinema)to be satisfying. Frankly, I find them to be a mind-numbingly redundant& juvenile cliche. I've never forgotten Brody squeezing his eyes shut against the expectation of unimaginable pain and horror at being eaten alive, only to find that the damned shark had finally just given up the ghost. I expect SK had much the same opinion about Kubrick's climax to the film adaptation of The Shining...one of the only instances I can think of in which Hollywood eschewed a previously established loud & cheap pyrotechnical resolution.

jim boone, you make a good point bc I do agree not everything needs to end with a bang, and I like the feeling you got at the end of the novel. Guess I'm just being too subjective. We all know JAWS kinda sorta helped invent that kind of Hollywood ending, and Benchley *hated* it, found it ridiculous and implausible, but Spielberg, being a child of TV and the movies - the first generation of filmmakers that could be such - followed his instincts. What works on the page often doesn't work onscreen.

I'm sitting right next to an old paperback copy as I type this at my grandmother's house, seeing it reminded me to re-read this review

and I agree, it's not good, I started to read the first several pages only to encounter the word "faggot" and mention of a "black gardener who raped seven rich white women", yikes

I vehemently disagree about the quality of the book - the type of narrative is different from the movie in a key way, that is focuses on the struggles of these people, where the shark is merely one more problem, while the movie makes the shark a much more prominent player and problem.

The book has its charms, and Benchley is a fantastic author. I do agree that it has flaws though.

Since the 40th anniversary of Spielberg's movie has lately been getting some attention, I thought I'd weigh in. Is Benchley's book different from the film? Definitely. Inferior? Debatable. Like some of the other posters I first read it at a tender age (eight, I think), and it introduced me to several other themes of adult fiction, besides shark attacks: marital infidelity (pretty explicitly described); organized crime; small-town racial and class politics; even alcohol and drug abuse. Heavy stuff next to Scooby-Doo and Weird War Tales. And Benchley's later "Lush" is an entertaining and moving depiction of alcoholism. After surviving "Jaws," I was ready for more grown-up novels - my follow-up read was the Big E (by WPB), and the rest, for me, was history.

Personally, I love both the novel and the film. It's because of how different they are that I can enjoy both of them without seeing one or the other as a retread.

Personally, I've never understood Steven Spielberg's comment that he was rooting for the shark. The people in the book are a lot rougher and more realistically flawed than the almost happy-go-lucky characters in the movie, but they're still relatable and interesting. Martin Brody also has more of a quiet strength. I really like it when after being threatened not to close the beaches, he takes time off and eats lunch at the beach just so he can keep an eye on things and try to prevent anything from happening. I also love the feeling of corruption and intrigue in the town that keeps building up gradually.

Overall, I think the book is a lot better and more interesting than you give it credit for. Maybe you're reading it from the wrong point of view as an inferior version of the film, when you should be taking it as its own completely separate story.

Colin, you may be right--I know do enjoy re-re-reading Benchley's novel. I love all the food imagery, especially the awkward dinner party the Brodys have.

I have the 2nd (in your pictures) Pan edition and bought it from a 2nd hand stall when I was young enough to think the story would be like the film. Imagine my surprise (I would have been 10 or 11) to discover that a) it wasn't and b) the book cracked open at a very smutty scene.

All I can remember about the damned thing now, some 35 years later, is that Brody pees like a horse - which isn't a good recommendation for the writer!

Not only was there no USS Indianapolis in the book, the one in the screenplay didn't much resemble what we saw on screen. That scene was heavily rewritten by Robert Shaw to suit his delivery. As you say, accomplished writer. :)