Living for the Screen: The Bastard "Art" of Horror Movie Novelizations 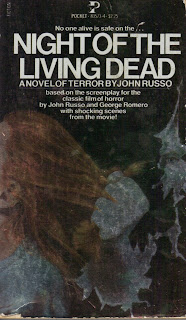 You won't find me collecting too many horror movie novelizations. While horror movie fans might find them exciting, I think novelizations are a strange and thankless art for the reader. I suppose they're not even art, they're simply commercial artifacts designed to sneak more money out of a film fan's pocket. Initially as disposable as a movie-theater popcorn bag, they have, like so much other pop culture detritus, turned into kinda cool collectibles. I read many as a kid before moving on to, well, actual books. I certainly don't think I'm alone in that, and I remember devouring the Star Wars, Indiana Jones, Alien and Superman novelizations of the late '70s/early '80s.

Most novelizations probably aren't worth much, but some have turned into decent collectibles thanks to, of course, covers that either reproduce the awesome poster art - as in Nosferatu (1979) - or features more characterization - as in The Wicker Man (1978). And I must say, I was pretty jazzed to snag that copy of Night of the Living Dead (1981), even though the guy peeking out from - well, whatever it is he's peeking out from - looks nothing like a zombie. 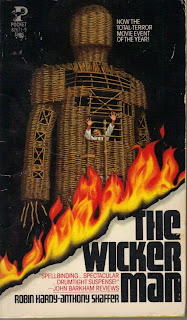 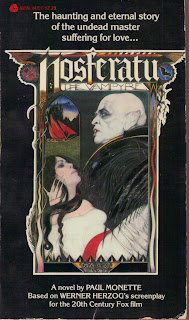 Novelizations are different from movie tie-in editions, which are when novels written first are then repackaged later with the movie adaptation poster on the cover. A good example is Stephen King's 1982 collection of four short novels, Different Seasons. This baby got re-released half a dozen times as a total of three of the novellas were adapted into popular movies. It's not just double-tripping; it's quadruple dipping, and more, in some cases. Check them all out here. 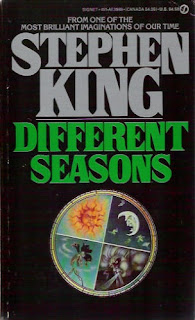 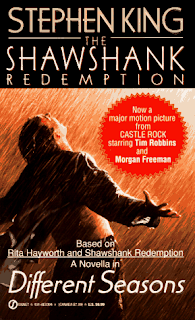 The literary merits of the novelization are next to nil, probably even closer, but often they are based on early or discarded drafts of screenplays and can therefore offer different or more in-depth details not in the finished film (see Jaws 2 for a great example). Often the books have pseudonyms or ghost-writers, and in the case of Nosferatu, have authors who became rather well-known in the literary world. Paychecks were pretty much guaranteed for this type of work, so many burgeoning young authors put aside notions of artistic purity and cranked 'em out on the side.

Even the estimable Ramsey Campbell, under the incredible and incomparable pen name of Carl Dreadstone, had a payday with 1970s novelizations of 1930s Universal monster classics, which actually go for a fair penny on eBay and such. I have so far been unable to track these down for a price I'm willing to pay. Which is like a buck. 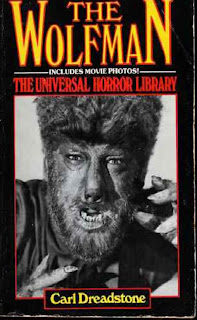 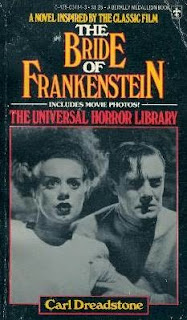 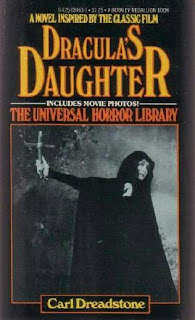 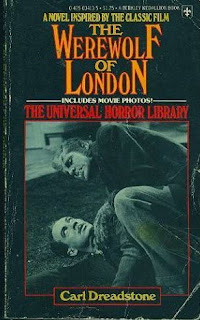 Others who turned to novelizations include Dennis Etchison - actually, a major editor/short-story writer of the 1980s who I've not yet written about on this blog - who, as Jack Martin, penned Videodrome, David Cronenberg's bizarre cult masterpiece from 1983. Etchison worked from an early screenplay of the director's and therefore some of the alien quality of the movie is alleviated. John Skipp and Craig Spector, just before the height of their popularity, wrote one for Fright Night, the charming 1985 homage to horror movie hosts of the 1970s. 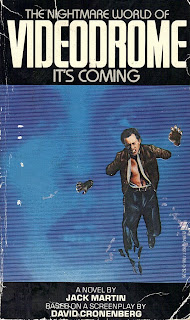 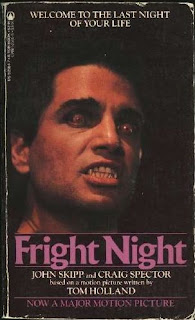 While I have here and there picked up some of the above novelizations, they're not really my collecting focus; I won't be filling my shelves with all the Friday the 13th novelizations, for example (an exception would be made for the novelizations of George Romero's Dawn of the Dead and Martin). But for anyone really interested in this aspect of horror fiction, I mean really and sincerely, you have to go here; this guy has an astonishing thread going, albeit from four or five years ago. The covers are mostly amazing. Imagine that!
Posted by Will Errickson at 9:30 AM

Have you read the WICKER MAN novel? I haven't, so maybe I'm wrong (and come to think of it, actually reading it wouldn't offer evidence either way), but I'm pretty sure that's one of those "written-in-conjuction" kind of things. I don't remember where I heard this, but I thought the novel was written before or during shooting of the film, and published more or less at the same time. I have a copy, and plan on reading it at some point, and writing something up about it. But the main thing is that I don't think it's technically a novelization as we generally think of them.

I love that somebody wrote a novelization of Herzog's NOSFERATU. I didn't know that. And why is Paul Monette's name so familiar to me?

I read it about six or seven years ago; mostly I recall there's more detail about Howie's relationship with his fiancee in the first chapter, making him out to be even more prudish than the film. My edition has a 1978 copyright with a May '79 publication. There *is* a novel called The Ritual by David Pinner that was the basis for the film. Don't know why they just didn't do a tie-edition with that book, or why the actual novelization came out much later.

And Paul Monette was a popular gay poet/memoirist who died in 1995 & also won the Nat'l Book Award.

I remember seeing an edition of The Scarlet Letter with Demi Moore on the cover (from the movie adaptation). I nearly vomited.

I hadn't a clue there was a novelization for Videodrome. The film is heavy on visuals and is a highly sensory experience. I would enjoy Videodrome even with the sound off. Not sure how a novelization could enhance the experience, but I am somewhat curious.

I get it from a collector's angle, and maybe even from someone who is a big fan of the film, but movie novelizations are a strange breed of fiction - and yet they definitely have their own market. I think tv novelizations are even worse...

It's worth pointing out that the NIGHT OF THE LIVING DEAD novelization is written by the co-screenwriter, and that Dennis Etchison also wrote novelizations of THE FOG and HALLOWEEN III. I've never read a novelization but I mean to get around to Dennis's one of these days as he's such a great writer (one of the few who I think could actually do some sort of justice to Cronenberg's visuals). Sadly VIDEODROME is the only one I don't have.

Thanks for pointing that out, Donald--indeed, I had those points in my head while writing up this post; somehow they got left out and forgotten when I hit "publish"!

I have a Nightmare on Elm Street novelization that goes through the first three films in 216 pages.

Holy crao! Those are some incredible books! I would love to get my hands on those for my tie-in collection. Have you seen the covers for the Omen books and the one for The Thing? They're beautiful in an 80's way. This is a great post.

I wouldn't mind picking up novelizations that have different images on the covers than the movie poster, that's for sure. I remember THE OMEN but not THE THING, thanks for recommending it.

Great post, Will, and I'm really loving your blog. Novelizations made a little more sense back in the pre-home video days when they were your only bet for re-experiencing a movie you loved in the theater.

This all makes me think of my attempt to buy a copy of what I thought was John Russo's early 70's novel Return of the Living Dead. I got it home only to find it was the novelization of the 1985 film of the same name which was supposedly based on Russo's novel but the two really had nothing in common. So Russo wrote the original novel and the novelization of the film. Nope, that won't confuse anyone. Years later the original novel came back into print and sadly it was dull as dishwater.

Thanks, Matt. Good point about the function of the novelization before home video. I think there's always been some confusion about RETURN OF THE LIVING DEAD and any connection with NIGHT OF THE LIVING DEAD. I believe Romero got the "dead" part and Russo kept "living dead."

Oh Boy, I do LOVE me some genre film novelizations & tie ins!
As a lifelong horror film & fiction fan who's also a book collector, my novelizations & tie ins are an important subset of my library.
I have all sorts of 'em from Curt Siodmak's DONOVAN'S BRAIN to the very first movie tie in version of Bloch's PSYCHO to Ray Russell's SARDONICUS to the adaptions of NOTLD, HALLOWEEN II & III, BROTHERHOOD OF SATAN, TALES FROM THE CRYPT, THE BOOGENS, THE FUNHOUSE...
And so many more.
Including all the early Stephen King film tie ins. Fun stuff to have on my shelves for sure.

I haven't really purchased any for any films after the early '80s or so. But, I've continued to collect all the old paperback novelizations & tie ins that I come across for older movies in used book shops & such.