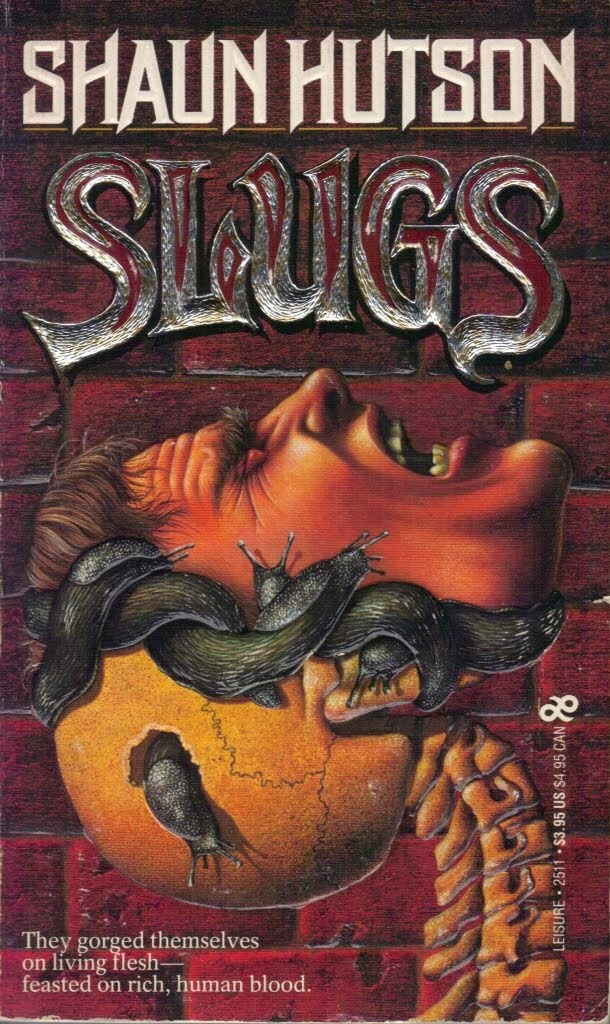 I can't imagine a blog devoted to horror fiction paperbacks not featuring the ludicrously gory and tasteless novels of Shaun Hutson, a notorious figure in British horror since the early 1980s. Slugs, his first, is still probably his most infamous "work," as it operates in the lowest common denominator hell of cheesy, grossout horror. Exploiting our revulsion at certain members of the animal kingdom - always a safe bet in the genre with a long and illustrious history (particularly in film) going back to Them!, Jaws, and even Alien. And once James Herbert published The Rats in 1974, we would never again be free from the horrors of nature, no matter how poorly written or conceived. 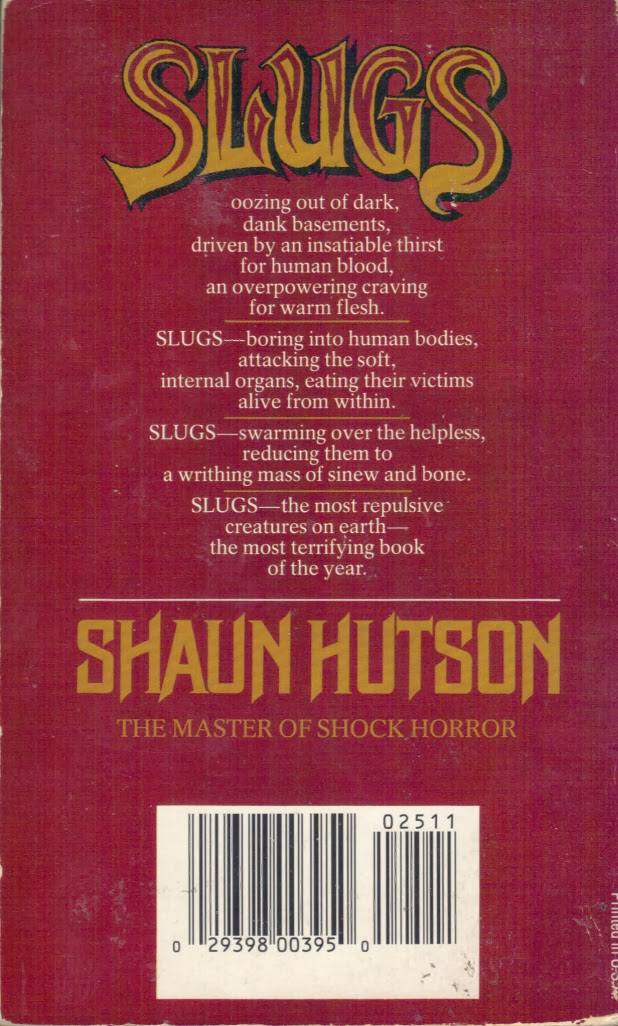 Leisure Books' 1987 edition cover art, by John "Not That John Holmes" Holmes, at top is gloriously idiotic: somehow this poor fella has been stripped of everything but his skeleton - skeletons again - even his central nervous system, even his brain by the looks of one slug creeping out his skull - and yet he's still grimacing in what looks like gut-wrenching pain. I guess I shouldn't be looking for CSI-level of accuracy on horror paperbacks; I mean, the last book I posted on had a skeleton driving a car, for God's sake. Skulls are one thing, I suppose, but any more than that risks absurdity. And it's from Leisure Books, surely the bottom of the barrel for horror fiction. 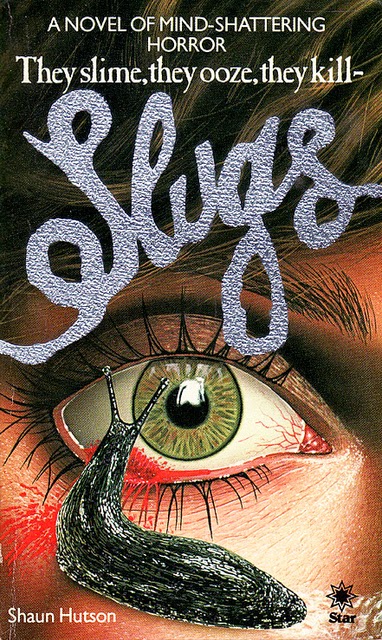 Honestly, Hutson's is the kind of low-rent horror writing that I've learned to avoid over the years. "Tell, don't show" is his maxim; anything that isn't 100% obvious to a remedial reader is jettisoned. Slugs "enjoy the taste of warm blood" over and over again. Sometimes Hutson writes "gastropod" instead of "slug." Dialogue between a husband and wife sounds like a coffee commercial. Characters are introduced, given a quick back-story, and then dispatched with martial efficiency and maximum grossness. The novel's last sentence is a rote twist that lacks imagination or care and can be guessed before you finish reading the books title. Oh, there is a teenage couple who get et listening to Iron Maiden, so that's something, at least. 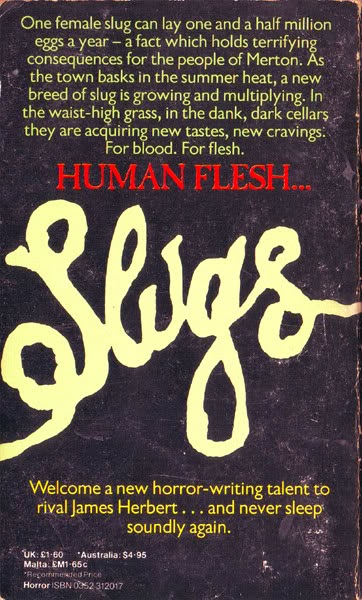 Certainly people can mindlessly enjoy Hutson's energy and glee, understanding it's bad when they begin reading, approaching it like a big-bug movie from the 1950s or a SyFy one today except a whole lot grosser (I will give Hutson a couple pulp points for his boundless enthusiasm in coming up with unique scenarios of disgust), but this kind of horror is just not for me. That's why I'm only reading this now, over 20 years since I first started seeing copies of Slugs turn up in that used bookstore I worked at. I found it last week at a local bookstore and buying it made me recall those days when you had to buy porno mags in an actual shop. Ugh, the embarrassment! And it probably won't be the last time--I've still got a couple Hutsons on my shelf. 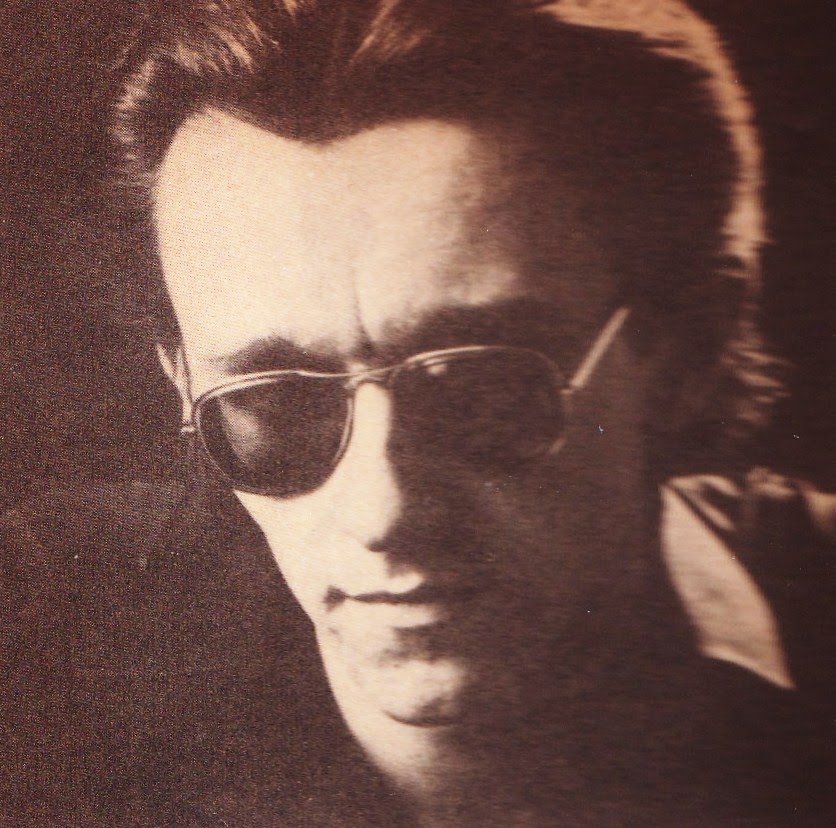 I was doing research on a creepy-crawly type novel I had planned on writing when I came across SLUGS and it's sequel BREEDING GROUND.

After I 'tried' to read both books, I came away depressed that the idea was stupid to begin with.

Sigh. Is there such a thing as a well written 'creature' book?

This cover is terrible. I much prefer the Mark Taylor cover. In fact, I don't even think the cover you have up is even acknowledged by Shaun on his Official site.

Great find. I love this blog.

And to answer The White Wolf's question about creature books: YES!!! There are good 'creature' books. Check out Jeff Strand's Dweller. It is more than worth it.

Thanks for reading, guys. I actually did notice this cover was not on Hutson's site, nor on Amazon. What?!

That cover is hilarious!

I'm sorry, but that cover IS funny as hell! This is the type of book that I would pick up immediately from the shelves. It looks so inanely ridiculous that you can't help but want to find out what's creeping inside. I'll have to dig into this one when I find it. Do you advise taking this one with a grain of salt?

Gotta agree with Richard and Joe...that cover absolutely slays me!!

Really enjoy your blog but I think you have approached this book from the wrong direction. I read Slugs last year and I loved it! Granted, it's not 'challenging' or 'intellectual' but it's not supposed to be is it. Just look at it! What it is is very funny, very gross and very entertaining. And that cover is awesome!

Anonymous, you may be right. But I really hated the giant-size typeface in this paperback; it made me feel like a kindergartner holding one of those big red pencils w/o erasers.

I read a giant snail story in an Alfred Hitchcock collection that I enjoyed. (Maybe giant creatures fall into a different genre?) I am pretty sure there was another very good story in that book called They Bite.

The first story appears to be The Quest for Blank Claveringi (1967) by Patricia Highsmith, from a cursory google searching.

Hutson has mentioned that he read the Pan Books Of Horror Stories growing up & that he may have been influenced by 'The Snail Watcher', included in the 7th volume. Of course Hutson being Hutson, he 'doesn't remember' who wrote it, Patricia Highsmith being one of those 'pretentious' writers & all.

Hutson is the worst author I’ve read, the most self indulgent, the least talented, the most cringeworthy (thanking Yamaha drums in his acknowledgments, simply why?), the most unimaginative. And I’ve had to endure Finnegan’s Wake. I suspect that Garth Marenghi’s Darkplace takes aim (at least indirectly) at the puerile onanism that Hutson tugs our.

And why does he always thank Sam Peckinpah & say how much his 'loss is still felt' when he didn't know Peckinpah personally, he stopped making films in 1983 & you can watch any of his films whenever you want on dvd or blu ray?