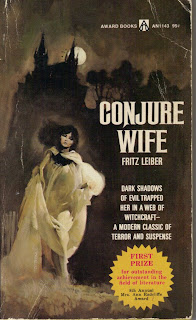 Two good novels from classic fantasy writer Fritz Leiber: Conjure Wife and Our Lady of Darkness. The former is a tale of witchcraft set at a New England college university, while the latter explores the occult theory of Thibaud de Castries known as "megapolisomancy" (invented solely by Leiber himself in a Lovecraft-inspired bit of mythmaking) and posits the city of San Francisco itself as a haunted - and haunting - entity. It also weaves authors like Jack London and Clark Ashton Smith into its storyline, as well as the pulp fiction background of Leiber himself, and won the 1978 World Fantasy Award. Both novels feature modern men, thoughtful and literate, modern men of skepticism and rationality, who find that the dark superstitions of the past have a horrifying way of wending their way into the light of the contemporary world. Count me in! 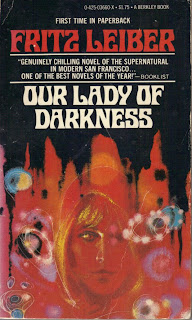 I don't think either of these covers captures the feel of the books themselves: Conjure Wife is another example of an older book republished during the height of the Gothic romance fad (this edition is from '68, art by the great Jeffrey Catherine Jones). Its current edition has a pretty foxy Goth chick on its cover, reminiscent of the loverly Eva Green. Berkley's Our Lady of Darkness has an odd psychedelic tinge to it, dated even by 1977 standards; fortunately Amazon has it listed as being back in print this fall.

...sometimes it wasn't clear whether it was a real woman, or a goddess, or some sort of metaphorical entity that de Castries was talking about. "She is all merciless night animal," he would say... "She knows the cities' secrets and their secret weaknesses, their ponderous rhythms and dark songs. And she herself is secret as their shadows. She is my Queen of Night, Our Lady of Darkness."

Posted by Will Errickson at 4:15 PM

I read Conjure Wife a few months ago. It really affected me in a powerful way. Half the time I felt like the main character myself, totally disoriented and confused as to the goings-on. Leiber was a master at writing urban horror stories. Have yet to red Our Lady of Darkness.

I think you will have pretty much the same reaction! I much preferred it myself, lots of in-jokes about old pulp writers.

What a fantastic blog this is. This is, like, everything that I love in the world. I've poked around here a bit before, but never realized the full scope of it.

Keep up the good work, Will!

Too much horror fiction ? No! But there is not enouch good horror.

Thanks, Bill. I know you've covered horror literature plenty on your blog, so it's cool you stopped by. And it's true there is not enough good horror fiction; I often don't like a lot of the books/stories I read. Oh well, as long as they gots cool covers I'll post 'em here!

OUR LADY is even better -- an allusive feast for fans of horror fiction.

Me again. While I haven't read Leiber's "Our Lady of Darkness", (I'm more of a short horror fiction guy myself), there's an absolutely creepy short story by Leiber that I think works as a thematic preface to Our Lady. It's called "Smoke Ghost".

I'm also a fan of "Smoke Ghost."
Leiber has a bunch of good horror short stories,
but that side of him tends to get overlooked
due to the deserved popularity of his sf and fantasy work.

If I recall correctly, Leiber was among the first
to regularly put horror fiction in a modern urban setting, paving the way even for Matheson. He's also a great example of how
genre prose can be literate without being pretentious
or dull

Karl, you're right; Leiber is recognized - perhaps not widely though - as being a very early practitioner of supernatural horror in our modern world. I've only read his horror stuff, though.

FYI, I just finished NIGHT TRAIN (1984) by Thomas F. Monteleone, and it references de Castries and megapolisomancy as well. While reading, I almost started to believe that there really *was* a de Castries, even though I was pretty positive while reading OUR LADY years ago that he was just a fictional creation of Leiber's. But I had to look it up to be sure, as it refers to this megapolisomancy stuff as if it's a real theory (Pretty good book btw, definitely above-average 80s horror fare, dealing with a haunted NYC underground).