'Salem's Lot by Stephen King (1975): Because The Night Belongs to Us 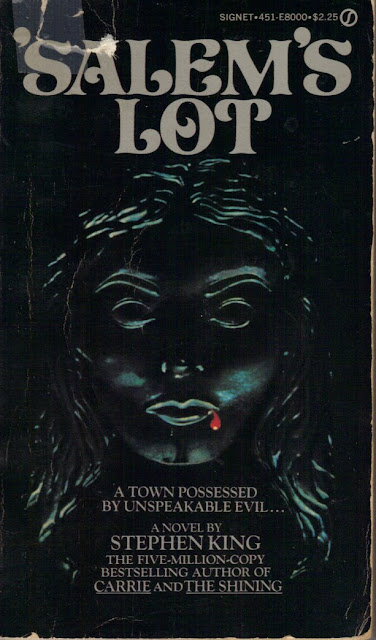 To this day, Stephen King's second novel, 'Salem's Lot, is one of only two or three works of horror fiction that, upon first read, instilled in me a palpable sense of fear and trembling not simply for the characters but for myself as well. Over a quarter of a century later I can still feel the chilling vice that clamped around my scalp, recall how my stomach flared hot and sick and how the goose-flesh quickened along my arms, neck and shoulders, as if someone were behind me. I was up way too late on a school night, alone in my teenage room and I was afraid to look outside. But why would I want to look outside that late at night? In that I know I am not alone. 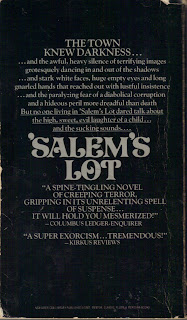 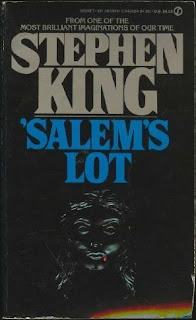 But I wonder, is that feeling even possible today? Is it because I was a not-so-experienced horror fiction reader at the time I read 'Salem's Lot? That I had yet to experience Lovecraft and Straub and Machen and Blackwood and Jackson and Leiber? Or was it that King so effortlessly wrote about simple fears of wrongness and malevolence in a common world that is perhaps inured to such things that I couldn't help but respond as if I myself were in danger? Honestly I don't even read horror (or watch horror films) to be scared anymore. Sometimes I wish I could recapture that feeling. 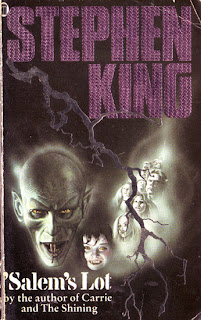 King has said this novel was his attempt at bringing Dracula - one of the few other books to physically frighten me, in the middle of 8th grade study hall - to the modern age, at imagining how this Old World villain would fit into a New World environment. Would the master vampire, in all his darkest wisdom, choose to arrive in New York City or Boston, or would he perhaps choose a quiet, near-forgotten rural town far from any outsider's concern? King felt the latter would provide the best cover and placed upon 'Salem's Lot the curse of the undead through cultivated Mr. Straker (I cannot see anyone else but James Mason in my head) who prepares the way (where have I heard that before?) for the dread Kurt Barlow, vampire king. 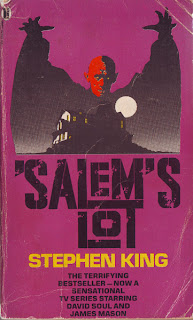 Their locus is the black and shuttered Marsten House, which overlooks (where have I heard that before?) the Lot; the distasteful and perhaps satanic owner of said house Mr. Barlow had illicit communications with decades before the novel begins. The town has its secrets, King informs us, but it keeps secrets even from itself:


They know that Hubie Marsten killed his wife, but they don't know what he made her do first, or how it was with them in that sun-sticky kitchen in the moments before he blew her head in, with the smell of honeysuckle hanging in the hot air like the gagging sweetness of an uncovered charnel pit. They don't know that she begged him to do it. 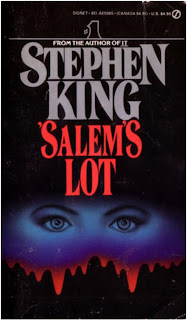 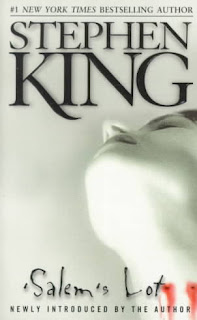 No sexy vamps or victims here

This was the first novel of King's in which he employed a rich panoply of everyday men and women, giving them believable backgrounds, interior lives, conflicting desires, and fears that finally make themselves manifest just past midnight. While no one would mistake King's depictions of such for those of an Updike, a Cheever, a Carver, his characters don't have the preciousness of those who populate more, ahem, lit'ry fiction. Ben Mears, the protagonist, is the first in a long line of King stand-ins, young writers obsessed with childhood fears who struggle to move past them. Mears grew up in the Lot, left it, and now after the accidental death of his wife and the nightmare of what happened to him inside the abandoned Marsten House have drawn him back again, he wonders aloud if it could be anything like Hill House in that famous book by Shirley Jackson. Oh it is, it is that and more. And worse. 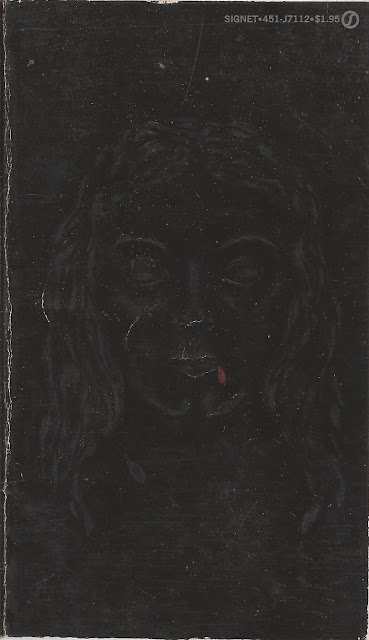 Although I've owned the hardcover of the book since high school, I found this '70s Signet paperback recently (at very top); I'd forgotten how simple it was. I like that you can barely see King's name on the cover (didn't even appear on the first Signet paperback printing), so obviously this edition was published before he was a name-brand author. The androgynous, angelic face looks like it's carved from stone, or maybe forged in iron; it reminds me of the Jacob Marley doorknocker from "A Christmas Carol." And blood so subtle, just a drop, just a drop to hint at the immortal terrors within, those terrors that millions know and have never forgotten, but they are terrors that sound strangely like a child laughing, laughing right outside your upstairs bedroom window, long after the sun has gone down on the final night of your life... or on the first night of your new one. 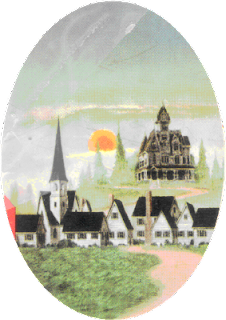 "And all around them,
the bestiality of the night rises on tenebrous wings.
The vampire's time has come."

Posted by Will Errickson at 4:02 PM

Just re-read the scene where Mike Ryerson, the gravedigger, is burying the recently dead Glick boy. I've re-read that scene time after time and it never fails to raise goosebumps. Shudder!

This has been a book that I've been dying to read for a while. There's just something about it that seemed to say to me "THIS is Stephen King's scariest book" and I've vied to devour it ever since.

Perhaps I feel that way from my memories of the TV movie. I remember seeing that in fifth grade around Halloween. Of course it was the scene with the vampire boy tapping at the window. Goodbye, sleep!

Awesome cover you have there and an even more amazing review to boot. I really love this blog to death.

Great, great cover. Understated almost to the point of invisibility, but troublingly eerie at the same time. My ideal of not only how a horror book should, but the feelings it should arouse, as well.

Thanks for the compliments! I recall watching some of the original TV movie way back when on an old b/w TV with rabbit ears! Don't think my mom let me watch all of it. But of course the book is way more powerful and in-depth. Without a doubt a modern horror classic.

"But I wonder, is that feeling even possible today?"
The first thing that popped into my head was: I wonder if he's heard of 'The House Next Door'? I found it not too long ago in a used book shop and yes, that feeling IS possible! Then I checked your archives and sure enough, you've read it! 'House of Leaves' is similarly dread-inducing (though a very tough read)...

Far and away the scariest scenes in the book are those involving the Glick boy, whether he's outside the window or laughing softly in Matt Burke's spare room.

I devoured this one sitting in my yard at the age of 14 utterly rapt and clutching the thing in the lap as I read. One of King's very best.

I think King's book Salem's Lot is one of the most scariest book that I have read. Actually, King was not my favorite writer not until a friend of mine suggested his books. So, given the fact that I am also a fan of horror stories, I decided to try Salem's Lot. The first chapter was a little bit vague but as the chapter goes on, I found it very exciting. Each chapter was well written and described in way that I could really visualized the real happenings. The "Bag of Bones" is also good.In fact I have collections of his books.

I was about 19 when I read this. I was working a night shift in a factory, and somebody had left this lying around. The cover of the copy I read was just plain black (this in England) with slightly embossed/raised lettering indicating the author and the title. But still plain black. It scared the crap out of me. Been a fan ever since. I write humorous news spoofs on the net, and in part, King was the man who inspired me to write. This is one of his very best, if not THE best. Thanks for the inspiration Mr King sir. And this is a wonderful blog. Thanks for that too. Skoob1999

Cool, Skoob, thanks for stopping by. This book doesn't let go easily...

That passage you quoted above, about Marsten killing his wife, is just superb. Brilliant.
I REALLY need to read this again, it's been a long time!

The face always looked like wrought iron to me, and you're right--it's tremendously evocative and strange. This is a great book, and one that lingers in the memory for years; even now, I can still remember details like the woman trying to feed her dead son, or the boys floating outside the window...they should remake this again. I don't think the movie did it justice.

John, there was a remake for cable TV in 2004 or so with Rob Lowe and Donald Sutherland, and it was just okay.

The part in the book where Danny and Ralphie Glick are walking home in the woods from Mark Petrie's house creeps the hell out of me to this day. Such a very simple, very brief, and yet very terrifying section. Never again will I walk in the woods at night, even just outside my house.