Cold Print by Ramsey Campbell (1985): Down on the Beach 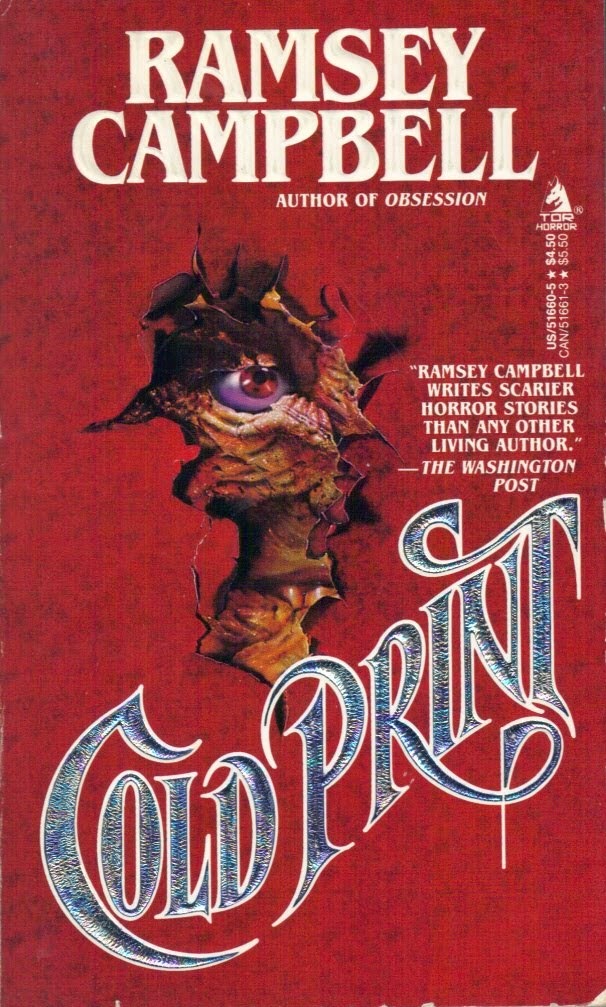 I believe Cold Print was the first Ramsey Campbell book I bought, and I recall thinking it was a novel but it turned out it was a short story collection. No mention of this was made on the book itself because, as I've pointed out before, short story collections don't sell as well as novels even if it can be argued the genre is at its best in the short form. And Campbell truly shines (usually) as a short-story writer, and I feel I appreciate his style even more today. There does not seem to be a whole lot going on on the cover of this November 1987 edition from Tor Books, however, so I'm not sure just what drew me to the book. But I did, and do, like the J.K. Potter cover art; there is something faintly... crustacean about that face, is there not? Potter's weird collages graced many a horror paperback and limited-press hardcover in the 1980s. The first edition of Cold Print came from Scream/Press in 1985: 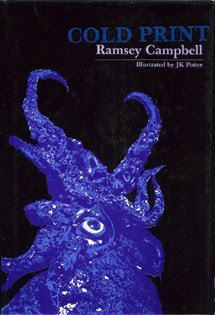 The book turned out to be mostly satisfying, as I recall; all the stories included are Campbell's (mostly) Lovecraftian tales. There are efforts from the '60s with the requisite "Noun preposition Place" ("The Church in High Street," "The Insects from Shaggai," "The Inhabitant of the Lake") and then later pieces from the '70s and '80s such as "The Face at Pine Dunes" (see? it's addicting), "The Tugging," and the masterful "The Voice of the Beach." In these we are treated to Campbell's penchant for intertwining intimate stories of drab workaday British life with his own style of cosmic horror. A few stories did leave me a little bewildered due to his sometimes well-known vague prose stylings. He also wrote a must-read intro about the incalculable influence Lovecraft had, and has, on him since he was 14 years old: "I read [Lovecraft's] book in a single malingering day off school; for a year or more I thought H.P. Lovecraft was not merely the greatest horror writer of all time, but was the greatest writer I had ever read." 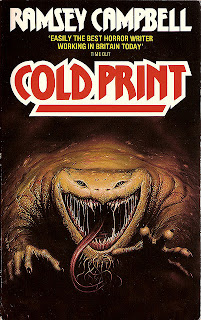 But don't expect more octopoid gods with gibberish for names, strange batrachian races of semi-humans, or ancient tomes of unknown binding; what Campbell does in these dense, carefully-wrought stories is create an overwhelming mood of dis-ease and fetid decay, of perception widened and skewed just so, so that one suddenly and for only a moment becomes aware of that chitinous skittering of something like claws at the cosmic rim.


I dozed gratefully, for I felt more delirious, my head felt packed with grains of sand that gritted together; in fact the whole of me was made of sand. Of course it was true that I was was composed of particles, and I thought my delirium had found a metaphor for that. But the grains that floated through my vision were neither sand nor atoms. A member, dark and vague, was reaching for them. I struggled to awaken; I didn't want to distinguish its shape... for as the member sucked them into itself, engulfing them in a way that I refused to perceive, I saw that the grains were worlds and stars. 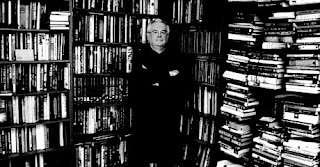 Posted by Will Errickson at 4:00 PM

Agreed -- I think Campbell is masterful in short form, and not quite as effective in book-length, where his overriding emphasis on mood and suspicious happenings can grow a bit tedious. Word for word, though, he's probably the best prose stylist in the horror field.

(Also, this blog is fantastic -- I read a lot of those 80s horror novels and it's great to see them get some love)

Agreed: Mr. Campbell is best in short-form and your blog is 'fantastic'.

I'm actually in the middle of this book right now. And though I'm not as fond of his "Lovecraft period" as I am with his later stuff, this isn't bad. He didn't really get good though, until he started writing in his own style (stories like "Calling Card" and "In The Bag").

I'd say my favorite Campbell collection is Dark Companions, but I also have Scared Stiff but I haven't read it recently. Falling Angel is one on my to-reread list so I can cover it here, good call! Mine is *not* the demon-covered one! Thanks again guys.

I like Campbell very much, and have enjoyed many a moody evening reading him.

Just picked up 'Alone With the Horrors' recently. It's a solid collection.

That face is quite reptilian.

Just started reading Campbell's most Lovecraftian novel, The Darkest Part of the Woods and it's pretty interesting thus far. I should go back and finish up Cold Print. I'd read a good chunk of it on a recent flight but put it aside as soon as I came home.