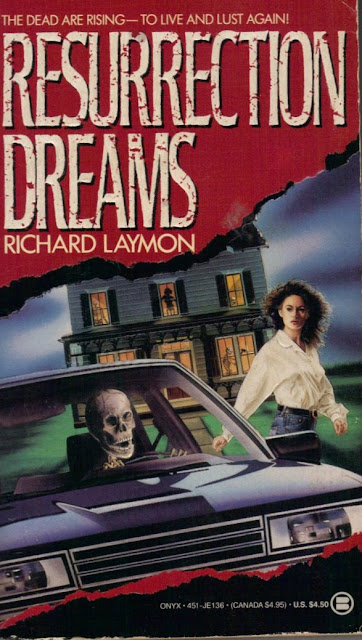 Now we get into the realm of the truly ridiculous horror fiction cover art. Let's parse this one a sec, shall we? Where do we begin? There is a skeleton driving a car. Not a rotting, pustulant, zombified corpse driving a vintage badass hot rod, but a simple, goofy, grinning Halloween-y skeleton, bared phalanxes at a sharp 10 and 2, careering off in a late-model sedan from what looks like a bordello of fellow active skeletons. And one of those skeletons has hair, quite feminine hair. Do you see the woman in the window? Second floor, middle. Ooh-la-la! Also, a skeleton pondering a noose and one swinging an ax. Huh. Skeletons are not scary; they're silly. And what about ol' mom jeans giving our skeletal pal the once-over twice? I do believe the fates have something in store for these two, putting them on a cover of a fairly lame '80s horror novel like Resurrection Dreams, Richard Laymon's agreeable but ultimately underwhelming and underwritten 1989 novel. 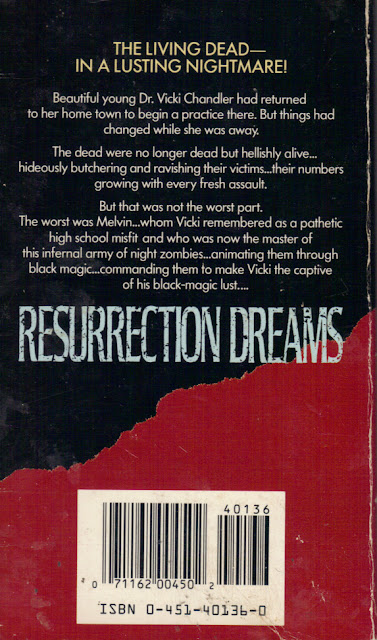 Laymon, who died in 2001, has had most if not all of his old novels republished in mass market paperback editions due to his growing posthumous cult status in the field. I do not belong to this cult. He was the type of author I avoided in my horror-reading heyday of the late '80s and early '90s and this book confirms my suspicions: I was seriously judging his books by their covers and the only story I'd read of his, "Mess Hall" in Book of the Dead, seemed to me an artless mess of sexual violence and gore. 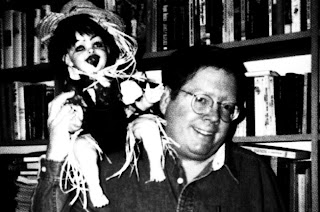 Evoking the film version of Lovecraft's Re-Animator, with a madman trying to resurrect dead bodies, Dreams is hackwork of the most inoffensive kind. Melvin Dodds is the high school nerd (you can tell that by his name) who, in a completely unbelievable moment just a few pages in, shocks the town with a horrifying experiment he displays at the school's science fair: trying to resurrect the body (with jumper cables!) of a popular female classmate, recently killed in a drunk driving accident. He ends up locked away in a mental hospital for 20 years; after he's released he heads back into town and operates a gas station. One of his former classmates, now Dr. Vicki Chandler, returns, and Melvin realizes he's loved her all along. The resurrection techniques he began in high school are now perfected, and if Vicki won't love him willingly, well.... 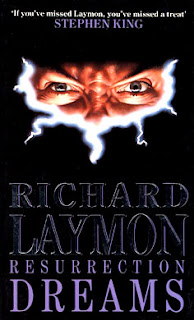 I am certainly a fan of ladies resurrected from the dead and the unholy passion that will thus occur, but Laymon really misses out on a chance to explore this taboo. There are a couple rom-com moments when Melvin realizes he's in a relationship with a zombie woman, Patricia, his first victim, rather than the woman of his dreams; Laymon is too poor of a writer and scenarist to make something out of this. Resurrection Dreams is ham-fisted and obvious, gory in the dullest manner, lacking the wit or passion or intensity that could have made his somewhat intriguing premise memorable. Let's just turn off the lights and close the door, shall we, and never speak of this again.
Posted by Will Errickson at 3:17 PM

My first encounter with Richard Laymon was FUNLAND (I was about 13 and thought it was alright). I then read THE CELLAR (that was even better). But then I made the terrible error of attempting to read RESURRECTION DREAMS. It must have been 1992 or 93 - I've never picked up a Laymon book since.

Good to know... I may pick up another Laymon if I find some cool vintage copies, but that's about it. Thanks for reading, Shaun!

Actually he does have good books they just get overshadowed by these ones. The Traveling Vampire Show, In the Dark and Blood Games are great give em a shot sometime.

Laymon is far too fond of sexual violence against women for my liking. Apart from anything else, it's lame and uninventive to use this kind of crime as horror.

Just came across this blog and liking it. Sadly a little shocked by the dislike of Laymon. Granted, one or two of his books are a bit pulpy and silly, but in general, he has written some incredible crackers! By far an author I prefer to read over others. I thought Mess Hall was one of the stronger stories in BOTD, ha, I guess everyone has different tastes.

Melvin Dobbs can say "I was a teenage Víctor Frankenstein"... if he's alive, of course.

One thing I find interesting(?) about this book is that it has never had a decent cover --the inevitable Leisure reprint has a fairly generic open grave with a full moon behind it (not that bad, but cliché as hell) and the Spanish cover (from Grijalbo) is pretty much the same as the Header one, minus the lightning.
That aside, there's not much to say about this novel, other than to me it has the exact same cast from pretty much all Laymon books: the obnoxious rapist (and killer, and in this case necromancer with a credit card, which is quite involuntarily hilarious), the supposedly strong yet oft victimized female lead (calling them heroines is almost a stretch), and the cookie-cutter support cast straight out of any cheap film production. And the very unsubtle right-wing politics to booth (when asked her thoughts on safe sex, a man asks our lead: "Are you a girl-warrior who's pro-abortion or an adventurer?". Later she replies "I want your baby, I just don't want AIDS". And this regarding a man she met two hours ago, mind.
As for "Mess Hall" I read that one in a class and remember it having the most deus-ex-machina use of zombies I have ever seen outside of a shot-on-video film atrocity.
But I will say one nice thing about this novel: the image of a headless cheerleader chanting "We got pep! We got steam! We are the girls on Melvin's team!" is so ridiculous it's genuinely funny, and maybe even intentionally so.