The Cipher by Kathe Koja (1991): Your Place in Oblivion is Secure 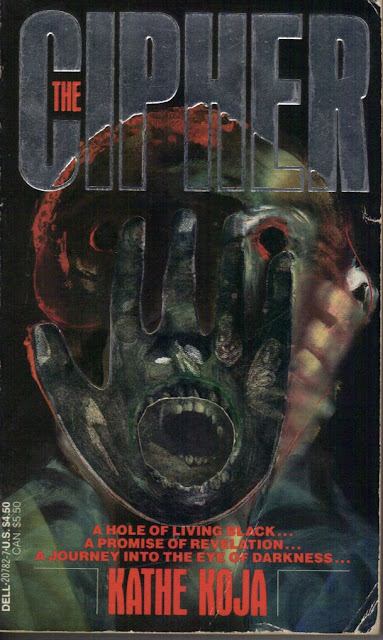 I still don't think there's been anything in horror quite like Kathe Koja's debut novel, The Cipher (Feb 1991, Dell/Abyss). These days she writes only young-adult fiction, but close to 20 years ago she was, as far as I was concerned at the time, the absolute cutting edge of horror. The Cipher won the Bram Stoker Award for Best First Novel (shared with Melanie Tem's excellent Prodigal), and it also launched Dell Publishing's Abyss line of innovative horror fiction. As their mission statement went, printed on the inner flap of each of its titles, Dell/Abyss dispensed with "haunted houses, evil children and Indian burial grounds." They wanted to present a new breed of horror novel, one that tried to get at a more real, more human, more, if you will, illuminating darkness. Very much a reaction against the bestseller coziness of King, Koontz, Saul, and V.C. Andrews, Abyss published (mostly) unknown young writers who were literate, underground, cool, and defiantly horror. 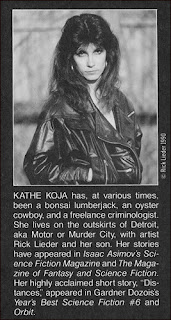 Well, Dell/Abyss couldn't have picked a more perfect work to kick off a new darker, artier style of horror fiction than The Cipher. The cover image (by illustrator Marshall Arisman) is reminiscent of Francis Bacon, and Koja's clipped, unpolished, impressionistic prose evokes surrealist, avant-garde icons like William S. Burroughs or J.G. Ballard. All of this sets a jittery, jagged tone of bleakness and rot. Her 20-something characters are poverty-gagged "artists" who exist in that demimonde of shitty jobs, squalid art galleries, and thrift stores; her settings are run-down studios, flat-beer bars, and dingy urban streets choked with black snow. Long way from Castle Rock, Dunwich, or Stepford, that's for sure. 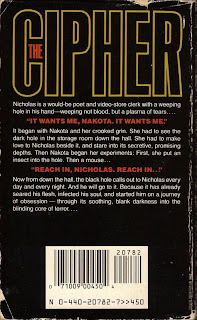 The Cipher is about literally that. Nicholas and Nakota, an unloving, dysfunctional young couple, find, in a disused storage closet of Nicholas's decrepit apartment building, a hole in the floor. A hole. Into nothing. And maybe it is nothing.

Black. Not darkness, not the absence of light but living black. Maybe a foot in diameter, maybe a little more. Pure black and the sense of pulsation, especially when you looked at it too closely, the sense of something not living but alive, not even something but some - process. Rabbithole, some strange motherfucking wonderland, you bet...

They dub it "the Funhole" (Koja's original title for the novel) but it is anything but fun; it is a locus of obsession and transformation. Nakota, conniving, manipulative, angular, and demanding, constantly pressures Nicholas to fuck with the Funhole, to test their limits. First, a jar of insects goes down into it; then a mouse. All come back monstrously deformed and mostly dead. Finally they lower down a camcorder (a funny dated bit is how difficult it is for them to actually get a camcorder) and when they watch the recording they see something like bloody stalks, caressing the screen like hands behind the glass, a figure carving itself... 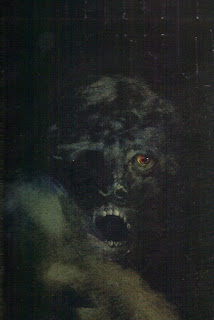 If anything the only real flaw in Koja's book is that it is too relentlessly bleak, too scummy, too hopeless; characters bicker and bite, sex is a joyless spasm, Nicholas an alienated, near-unsympathetic loser and Nakota a bitch without the goddess. But the cipher hungers for lives, no matter how derelict, and in a way the ending is foretold. What if somehow I'm crawling blind and headfirst into my own sick heart, the void made manifest? 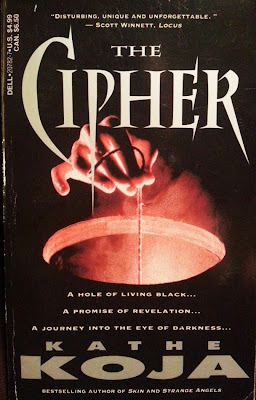 I loved this kind of existentialism 101 when I was 20 but now, with a larger literary emotional palette, rereading it (a third time!) I found it somewhat one-note. Maybe that's the point; it's oddly like a movie that was adapted from a one-set play in its insularity. No matter. There is a powerful originality in The Cipher that one usually doesn't find in paperback horror fiction; a fearlessness too as the novel operates, single-mindedly, in that metaphoric realm in which the monster always and only represents ourselves. 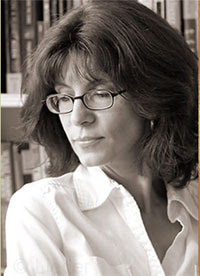 Posted by Will Errickson at 4:30 PM

Hi. Just wondering, have you had a chance to read some of Kathe Koja's short fiction? Some of it's fantastic. Especially "The Neglected Garden" and "Angels in Love".

I have her collection Extremities but have only read one or two stories in it. I did like her zombie story "Prince of Nox" in Still Dead.

Whoa, does that sound like a depressing read. But also extremely interesting. The camcorder scene you described sounds REALLY creepy and was enough to get me to consider finding this book. It's always great when you discover something refreshing, especially in the horror genre. Good work.

Thanks for reading, guys. House of Leaves sits on my shelf unread; one of these days... Joe, you should be able to find a copy of The Cipher pretty easily online. Enjoy!

While reading this description House of Leaves came to mind for me too. It was a read you definitely had to be committed to, but the idea really intrigued me so maybe I'll have to check out Cipher too.

I got the book off of Amazon based on this review. Amazing book. I'm almost done with it. She's an incredible writer. Brutal story, yet beautiful. Thanks for posting this.

Did you read Skin by any chance its the only one I've read by her thus far and it was a random find at a library sale. I liked it and her writing in it quite a bit.

I have Skin but haven't read it; the other ones I have read are Bad Brains and Strange Angels, both of which I liked immensely. It's been years, though, so I'd have to reread them before they turn up on the blog. Could be awhile!

THE CIPHER seems to be bubbling up lately ... Thanks for the shout-out, Will.

My pleasure, Ms. Koja. Wonderful to have you stop by!

HOUSE OF LEAVES is a bullshit novel. Don't waste your time.

I was lucky enough to find this book more or less when it was published. I then found a few other of the Dell/Abyss line, enough to convince me to just simply pick up anything under the imprint. A few duds, but always entertaining and sometimes some truly amazing things. For instance, 'Toplin'. Now, I have read lots of horror books and, well, all other types of books, but never, NEVER have I read a book that just so creeped me out that I had to periodically throw it across the room. [ed. your reactions may vary]. Course, this is one of the early Abyss books. Also look for Nancy Holder's "Dead in the Water" which has a prologue that can stand up to the opening of Shirley Jackson's "The Haunting of Hill House." ["This is how it will be when you drown...."]

Hum, from Kathe Koja's site this intriguing thing: "Very excited to announce that the film of The Cipher – titled “The Muse” – is now officially in development. Names and more details when I can share them, but for now, excelsior!"

I had a chance to read "Going Under". The ending was great, closing off the story without being too cheerful or unrealistic, which would really have taken away from the overall tone of the story.

Good to know, Laura. Sounds like Koja! Haven't read any of her YA novels, however.

does anyone know where i can get a copy of the cipher? the only ones i'm finding are 60 dollars and up.

Unfortunately, Sarah, I found the same thing, all over the internet: copies all around $60. Amazon did have a used copy for about $30. Your best bet is to just scour every brick-and-mortar used bookstore you can find!

I found my copy of the cipher on ebay for 20 bucks. Its a lot for a used paper back, but worth it for me. Try there?

I don't know if there are many books I dislike as much as I dislike THE CIPHER. I bought it when it first appeared and I was one very angry reader.

I know this is old, but wanted to say that I just found two copies when I took a mini road trip to Half-Price Books in Orland Park, and since the cover price is $4.50, you only pay $2.25! So definitely check out the nearest store in your area. I just picked up nice, vintage copies of that (just the one, though I probably could have made some money on the other), a ton of old James Herbert, HP Lovecraft with the cool 60's covers, like 5 Fritz Leiber horror novels/collections, some Beaumont, Aickman, Ellison, etc. All vintage and in very good shape. I sort of cleaned out their horror section! (Though a lot were placed in Mystery and Science Fiction)

Wish I would have known about those stores sooner!

Thanks for giving us horror fiction collectors hope, Jack! The books are out there... cheap.

Are original Abyss paperbacks of "The Cipher" a rarity? I was able to pick up one at my local heed booskshop for a few dollars. There's also an inexpensive ebook version, which I'll.probably buy when I inevitably read this a second time

I'm late to the party here, but wanted to mention that I've just finished the book and really enjoyed it. I'd known of its reputation for years, but was also unable to find a copy.

I gotta be honest: I loathed this one. I posted a more detailed breakdown on Goodreads, but this novel just really had me struggling to finish it.

I think it’s just the type of thing that if it were read closer to when it came out, the reader in his/her teens or 20s, it might’ve hit better… I’ve had a similar experience with a writer I really liked when I was in college in the ‘90s: Mark Leyner. It’s like, man, his writing style floated my boat back then, but a few years ago I read a new novel of his and had the bittersweet realization that I’d simply outgrown him.

Back to this book, though: I get that they were trying to do something different with this “Abyss” line, and that “The Cipher” was a fitting addition, so I have a bit of grudging respect for its originality. But still…

P.S. I too found this for a few bucks at a used bookstore. I didn’t know it was so sought after as to drive up online prices like that… I’ve encountered a similar hurdle in that I’d like to read “Let’s Go Play at the Adamses’” but I just can’t see payin’ that kind of money for a paperback.