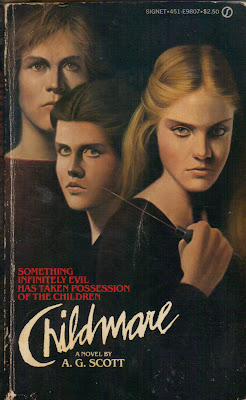 A pack of children had reduced London's most highly trained law enforcers
to a chaotic rubble.


This quote is the essence of Childmare (Signet, June 1981). It's a horror novel that almost voyeuristically revels in death and destruction, both up close and at a distance. Appropriately enough, I was reading it when James Herbert died, because Childmare is 100% in the Herbert tradition of fast-paced, graphic pulp horror, filled with snippets of everyday British life and locales. At times I even forgot it wasn't written by Herbert! But these are not criticisms at all, not for a moment: Childmare is a rip-roaring ride with some nicely tasteless moments of bizarre violence and cruelty that I think will make quite an impression on horror lovers.

I first heard of Childmare through a reader who remembered one of those tasteless scenes but not the title of the book, and another, sharp-eyed reader was able to identify this book as the culprit. Later I found a copy - pretty sure it was Artifacts in Hood River, OR - and immediately snatched it up. Glad I did! This is vintage horror fiction with a pretty bad-ass mean streak. 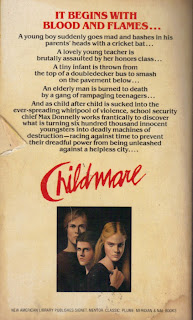 We get right into things with some bullying in the Martin Balliol School, a comprehensive in London, a perfect example of the modern industrialized educational facility. Small, fat and unathletic Samuel Rose is pretty much getting the snot beat out of him by a gang of teenage thugs when, at the last moment, the school's American head of security, a 38-year-old New Yorker named Max Donnelly, arrives to bark orders and assert authority. Of course Rose refuses to rat out his attackers, knowing that to do so would simply result in more, and worse, abuse. After a disgusted Donnelly dismisses him, Rose sneaks into the cafeteria storeroom, gorges himself on pilfered food - as most emotions did, fear had left him ravenously hungry - and hides out till the schoolday's end. That night, after lying to his parents about his torn clothes and various bruisings, he pummels them both to death with a cricket bat. 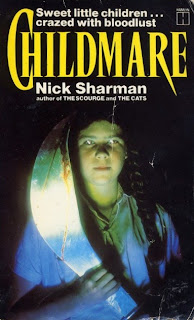 And so on from there. Soon all - almost all - of the 1,500 schoolchildren have rolled their pupils up into their eye sockets (an image sorely lacking on both US and UK paperback covers) and begun systematically attacking, in the most gruesome manners possible, teachers and other staff members. Think Dawn of the Dead-style mayhem and striking set-ups just not with bloody tattered zombies, but hordes of uniformed teenagers. There's mass destruction as special forces are called in with their guns and helicopters and tactics, all to no avail.

The children soon take to the streets of London, leaving mutilation and death in their wake. Donnelly, accompanied by sly, slovenly cop Tarrant and female interest and English teacher Tracy - herself nearly raped to death by her students in one particularly unsettling scene - narrowly escape the school and commandeer an ambulance and race through the familiar streets and boroughs of London, trying to deliver to authorities a folder of medical notes that could solve the entire unbelievable catastrophe, aghast at what the children have wrought. All too close for comfort for our protagonist:


To Donnelly it was a familiar sight, yet startling in its present context. It was Vietnam... Donnelly himself had led patrols which had perpetrated this sort of monstrous barbarity. And like the streets in Vietnam this one did not appear the victim of a sudden holocaust. There was something oddly long-term and durable about the destruction; as though it had wasted away over a period of many years to its present dilapidated sate. The street looked uncared for, abandoned, rather than the victim of a few minutes of inconceivable violence. 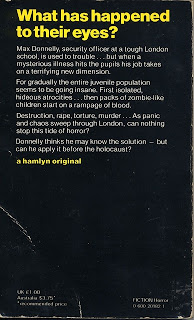 Childmare is, as was once said about other matters, nasty, brutish and short. The pace never slackens in its 200 pages; the writing is powerful, direct, taut. The author allows readers to see the horror from all angles: from the grimly-determined heroes to the hapless victims, from one young student not affected but swept up into the madness and fearful of being found out, to the actual perpetrators, victims themselves of a raging unquenchable thirst for violence: It was as if his cranium no longer contained a brain but, instead, an imploded star that raged with heat and light and pulsed fierce, agonizing energy through his body. Yikes. More and more of England's cities are plagued by the same nightmare, and in a few hours half a million kids are running to the town centers...

At times Childmare seems a dire, almost callous affair as the main characters must fend for themselves and leave others to the homicidal hands of the teens. Everything comes to an appropriately fiery end, but not before several pages of somewhat tiring jargon as to the origins of this ordeal - you really want to get back to the good stuff! Then there are the usual sentiments against uncaring royals and politicians, big business greed, scientific endeavor and progress: all deemed guilty of causing the tragedy. The children, it's true, are innocent, but they pay the final price. 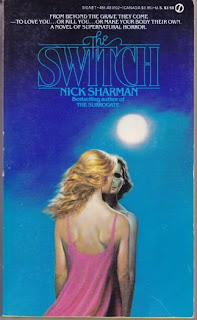 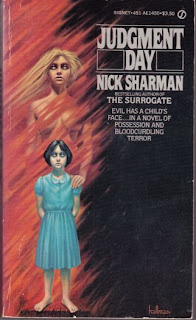 Oh yeah: author A.G. Scott is the pseudonym of a writer named Nick Sharman, the name Childmare is copyrighted under. In the '80s a handful of genre novels were published by Signet in the US under this name, but the only other info I could find about a Nick Sharman was the fictional detective. After some internet sleuthing - and where I ended up is where I should have started, at the Vault of Evil - I discovered that "Nick Sharman" is the pseudonym of one Scott Gronmark. However I don't know why the American paperback was published as written by A.G. Scott - I suppose it's a closer pseudonym to the author's real name. Such are the interests and pursuits of a horror bibliophile.

Posted by Will Errickson at 1:48 PM

Great literary autopsy of this amazingly good book, Will.

For a time, Gronmark was said to be the man behind Pierce Nace's EAT THEM ALIVE. In an interview, he flat-out denied it. Speculation continues.

His THE CATS, in THE RATS tradition, is also a good read.

I have got to stop reading your blog.
In the tradition of James Herbert? nasty, brutish and short?
Oh, yes, I have to read it.Off to Amazon I go.
Your costing me money,sir. My wife's complaining about the amount of gruel she has to eat(What's wrong with week old cabbage and half a carrot in a used tea bag broth?Why, in my day,we...well,never mind.
Coincidentally,Eat Them Alive just arrived yesterday.
Can't wait.
Any chance you could ,say, review the Twilight saga in the next few weeks? It'll give my wife a chance to eat some real food.Cos right now, I'm looking at an old shoe...,with some salt and pepper of course.

I remember seeing the cover to this book and not really liking it, so I didn't bother to read the back. Looks like I'm going to have to seek this one out now. I imagine it goes for a pretty penny on eBay these days. Well, perhaps if I sell more copies of "Nothing Men." I got lucky finding a copy of "Halloween III," but I don't think that will be the case here.

I too read this with the exact thought that it reminded me of James Herbert, specifically “The Rats.”

The parallels abound: Male protagonist works in school, has paper-thin love interest (in terms of character development); a threat that goes from localized attacks to a national crisis, and a race to understand just what’s causing the crisis… and of course the theme of a bloated government unable to protect its people.

But, yes, “Childmare” is enjoyable in its own right. It moves quickly, and I even thought the prose was rather impressive in parts.

I had no idea "Childmare" came out under two different pseudonyms.

Fantastic Fiction says Scott Gronmark also has a book under his own name, "Steel Gods."

The author is definitely American, "jell" rather than "gel", air conditioning in a London school?? A four o'clock bell? UK schools finish at 3.30pm these days. Back in the 70s and early 80s it was 3.45pm. He hasn't done much research!

No, he's from the U.K., although the AG Scott edition is an American version.

Jell is not an American spelling of gel.

It's probably just an error. (Or, maybe it's short for jealous?)