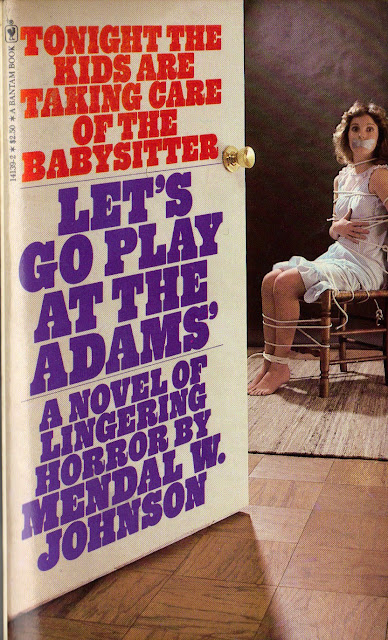 Innocence is the most frightening sight of all.

This compelling but squicky little cult novel by one-time author Mendal W. Johnson is the kind of book that makes you reevaluate what you read for entertainment and why. Published in hardcover in 1974, Let's Go Play at the Adams' is very loosely based on the mind-numbing torture/murder of Sylvia Likens. Adams' has acquired over the decades a grubby allure due to that aspect, as well as the scarcity of its various paperback editions, which finds vintage copies going for three figures. I found my copy at a library sale in 2011 for, um, and please don't hate me, a solitary dollar (Update: the novel has been brought back into print thanks to Valancourt Books!).

You can tell, by that reprint cover art alone (Bantam/Sept 1980), with its exploitation and fetishization of sexual abuse, that moral discomfort will be in full effect ("A novel of lingerie horror"? Oh, wait, oops). There's also a promise of rare and illicit thrills, of titillation, of the forbidden—precisely the kind of recipe fans of horror paperbacks crave. But is there more to the novel than that? 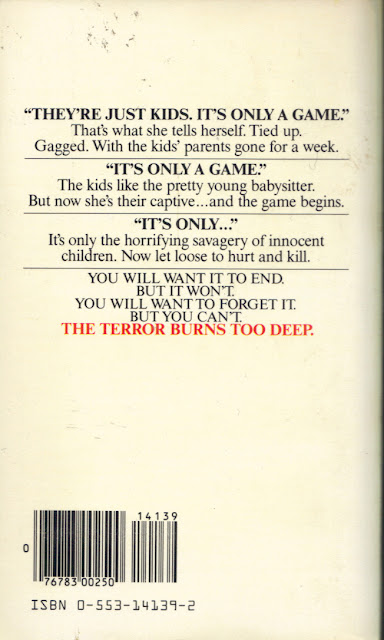 Johnson, who died in 1976 of cirrhosis of the liver due to alcoholism, has written a very strange, sadistic, yet unique work that offers somewhat credible motivation for a group of five seemingly normal all-American kids who, during one hot, rural Maryland summer week while their parents are away on vacation, tie up their downy blonde 20-year-old babysitter and, horrifying as it is to state it plainly, torture, rape, and eventually murder her. (Jack Ketchum's 1989 novel, The Girl Next Door, is also based on the Likens case, but the two books are entirely dissimilar). 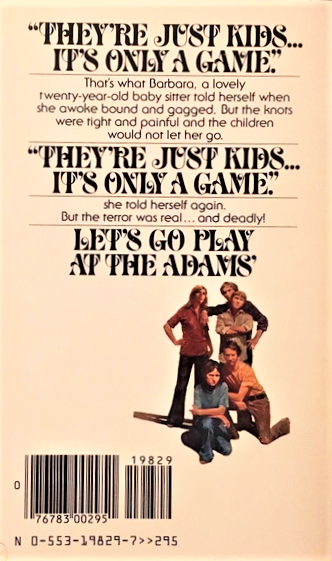 Dubbing themselves the Freedom Five in a bit of stick-it-to-the-man early '70s counterculture vernacular, five siblings, from teenager to child—Dianne, John, Paul, Bobby, and Cindy—have upended one of the most basic of social conventions: that kids and adults are basically two different species and that the adults are the superior ones. And now, they've captured an adult. They shouldn't have been able to, even with all the planning, because of that bedrock social convention, but here they were, out in the open, breaking the law between children and adults, and nothing was happening. They ignored the taboo, and no lightning fell.

This transgressive thrill motivates them—especially for twitchy 13-year-old Paul—but ultimately they know and resign themselves to the bald fact that they are entirely responsible and answerable for their own actions, no matter what comes next. They get unknowingly existential, as when Bobby explains to the captive: "Like when we were all figuring out if we could do it, it seemed like something we had to do. Like if you think you can do something, you have to"... till the end, when they realize someone has to pay for the end result of their hellish "fun." 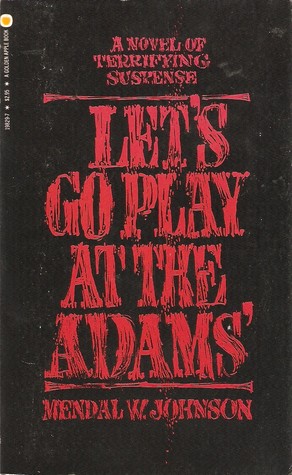 Johnson's work goes down dark avenues and doesn't want to come back. Horror fans will want to keep reading, but they might find, as I did, that Johnson seems conflicted as to why he wants to go to those cruel and twisted places; is his motivation to show us the darkness so we can better understand it? Or is the author secretly getting off on the whole situation? Judging by the endless descriptions of the knots and ropes and other items that bind poor Barbara in more and more uncomfortable positions, these S&M aspects seemed to me less depictions of fictionalized reality and more like weird slips from Johnson's repressed fantasies (or maybe, as a sailor, he just liked knots?). Like I said, this is a squicky book.

As for characterization, the tormentors are well-drawn, particularly budding sociopath Paul and oldest sister Dianne, who has some commonality—no matter how denied—with the babysitter. But babysitter Barbara is more blank cipher than sympathetic victim and often Johnson intellectualizes her plight rather than giving us the raw, naked hysteria and then detachment that I can only imagine would be real. The author saw Adams' as a political allegory (read here), which honestly I didn't even think of while reading. I suppose if I ever read it again it will be all I can think. 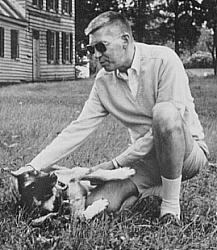 Mendal W. Johnson (1928 - 1976)
When he's not focused on bondage, I believe Johnson is saying that instead of ennobling us, beauty can make us feel lesser beings by showing us its unattainability; that we are cramped and craven, as it awakens in us whispers to dole out pain and humiliation, a torturous desire to topple beauty, to stain it in the dirt-crusted earth from which we can never escape. As if beauty were somehow an escape from the harshest of life's realities, as if it were some ideal beyond the everyday banalities we must endure. How dare beauty remind us, by its very existence, that we'll never possess it?

The difference tonight - her nakedness - did not much affect Bobby. Barbara appeared to be sweet, defenseless, and all that, but to him, she was also a trifle repugnant. The raw thrust of genitals and hair was a little too much for him at his age; everything was overscale compared to his own slight build. Her nudeness was simply another grotesque item in Bobby's troubled week. 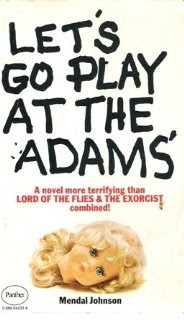 That is some tagline

The final chapter, a shuddering repercussive fadeout that gives no quarter and no answer, is as unremittingly sad as it is, at moments, difficult to read (the terror burns too deep). It will most likely haunt you afterwards. What began as a game ends with conventional morality in ashes. In the epilogue, we learn of the intimate guilty and ambiguous thoughts of Barbara's one-time roommate Terry as she grieves: Barbara, I hated you for being so easy and simple and happy. You deserved it, I hated you, too...Beauty, I knew you, and I never want to see you again... Goodness, go out of the world so that we can live in it.
This seems so ungracious, so unseemly, so terrible a thought to have about a murdered loved one that it actually has the ring of truth. In his own sometimes awkward, sometimes pretentious, yet always fearless manner, Mendal Johnson might've been on to something.
Posted by Will Errickson at 2:38 PM

It doesn't look to me like the girl on the first cover is tied up all that well. It appears that her arm is at least free enough to clutch at her stomach in horror...which makes me think she could probably get away if she really tried.

Yes, Jonny, it's little details sort of like that which made the book feel kinda ... wrong, wrong in a way Ketchum's book is not.

Again, not even remotely the kind of book I'd normally be interested in--but your reviewing prowess makes me at least willing to consider it. Tip of the hat to you, sir.

Great review, as always! I got this book (the one with the plain black cover) from a strange used-book mail-order place way back in the 90's, and didn't know anything about it - it was cheap, had a weird title, and looked worth a gamble. It was... but, you're right, there's something a little off about it. Ketchum's book was a lot more powerful.

I'd read this book but only if it was the edition that's at the top of the post (tied-up girl) because the illusion of the doorway is truly unique. It truly looks like the cover is opening up as a door and the perspective of the lettering heightens that idea.

I actually read this when it first came out and still (I think) have the paperback around somewhere. It bothered the hell out of me. I would have written to the author if I'd known his address, although I'm not at all sure what I would have said. I recall being furious. The ending basically said to the reader, Look at what you've done! Happy now? Which I thought was a good trick given that the damn thing didn't have to be written in the first place. Still, I remember it all too well, and I hardly ever remember anything.

Read this in 1975 after buying it in a thrift store. I terrified me and I could not put it down. Still have it. First edition $75? Hard to believe but okay. Sick, scary, twisted like nothing I had ever read before. Fire poker through the foot being the least horrible thing. Get it. Read it. Then try to forget it.

I read it as a teenager. It was horrofic but compelling for me. 43 years later I still remember some of it, but I don't want to read it again!

Hello! Unsure if you'll see this, but I was referred to you and your blog (via Reddit) on whether or not you would know or where to discover an appraisal (I guess?) I have a first edition hardback of his novel, signed by him as well.
Thanks! (If you see this)

Sorry, Eric, but I don't know anything about book appraising.