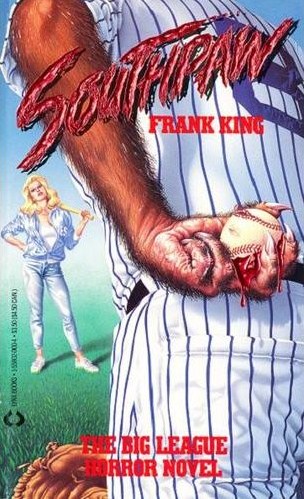 THE DEADLY SEASON: The summer of '88 is the season it all might happen again. "Bunny" Bunsen has inherited the team, and with a sharp business sense, has rebuilt the organization. For the first time in 25 years, the Wolves have it together.
Yet it soon becomes clear that something evil is stalking the stadium: An unexplained series of gruesome attacks is launched. The more victories gained, the more heinous the crimes become. As ex-coach Lombardi looks on, a hidden and horrifying past begins to piece itself together.

THE SEASON OF THE WEREWOLF: All the evidence suggests that there is something out there that doesn't care if the team wins or loses ... only if they survive.
Posted by Will Errickson at 2:15 PM

I wish I was a painter in the 1980s. I would've rocked so many horror paperbacks

Matthew, I think we all wish we were paperback horror cover artists in the '80s...