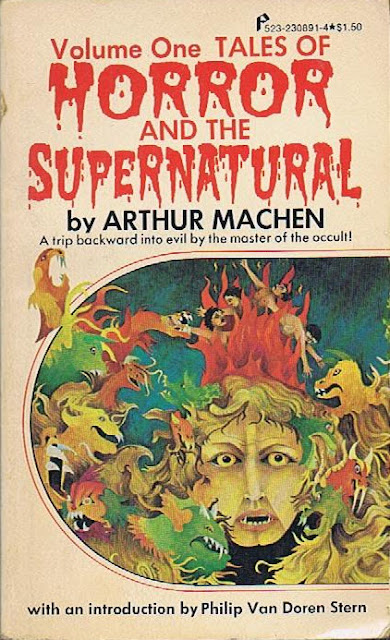 A towering figure in weird fiction, Arthur Machen (who died in 1947) was an influence and an inspiration for many of the writers I've covered here at TMHF: Lovecraft of course, and the whole circle of Weird Tales folks like Clark Ashton Smith and Frank Belknap Long, on up to King, Straub, Campbell, T.E.D. Klein and Karl Edward Wagner. And while Machen's output is out of my self-defined era of "vintage" horror fiction, these wonderful paperback covers most certainly are not! These collections date from the 1960s to the early '80s, American and British editions, with covers highlighting various lurid and sensational aspects of the Welshman's superb tales. They're are all highly collectible paperbacks as well; I've lost one or two over the years and have not yet replaced them. 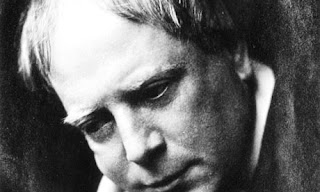 These top four paperbacks are from Pinnacle in the 1970s, two reprints of two volumes. Robert LoGrippo is responsible for the garish, blood-drippy covers from 1976. The fifth Pinnacle paperback is from 1983 and contains all the stories from the two-volume set. Can't even recall which one(s) I owned, and I haven't reread even "The Great God Pan" in over 15 years. Surely it is one of the seminal tales of classic horror. 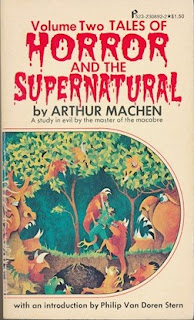 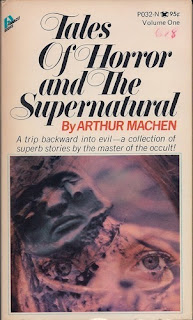 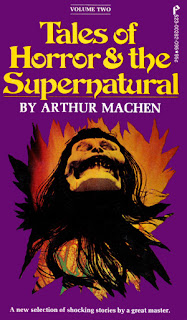 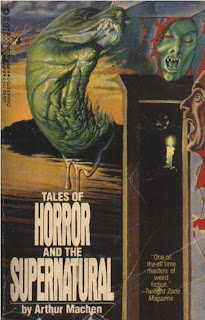 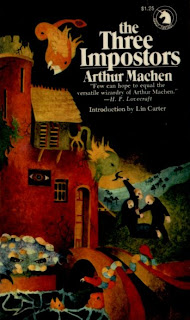 In 1972 the highly-regarded Ballantine Adult Fantasy line published The Three Imposters (1895). This novel - with Boschian art again by LoGrippo - in episode form includes two of his most influential stories, "The Novel of the Black Seal" and "The Novel of the White Powder." Below you can see the British paperbacks with those titles, from Corgi in the mid-'60s; love the covers by Josh Kirby. 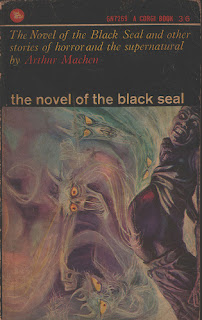 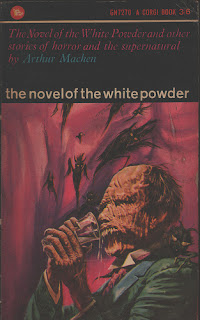 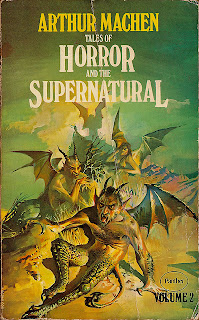 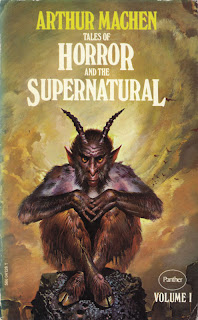 Two more British paperbacks from Panther - a publisher known for putting out lots of horror fiction - dated 1975, with eye-catching occult cover art from Bruce Pennington.
Posted by Will Errickson at 3:18 PM

Got to love Arthur Machen! "The Great God Pan" is such an awesome tale.

I have the bottom two pictured. Love Bruce Pennington's covers. When I was considerably younger I used to buy 2nd hand books on his covers alone, just because they looked wonderful (which kind of worked out - it lead me to Frank Belknap Long for example)

I love TGGP also, but I think "The White People" is a stronger story. He's simply brilliant.

Machen's novel The Hill of Dreams is fabulous as well, although not exactly a horror novel. I have the Volume One and Two of Tales of Horror and the Supernatural, which I bought new off the shelf... Think I still have them somewhere anyway. Good selection of covers as usual.

Dear Friends,
We have already republished Far Off Things - The first volume of Arthur Machen's autobiography in a scholarly, high quality edition in a limited run of 250 copies. As soon as we return enough from the sale of these books, we will print 250 copies of The London Adventure, in the same format. Followed by Things Near and Far, finishing the set. We know that the books are 'out of order' 1,3,2 but we thought the publicity from The London Adventure would help us secure enough cash to secure the third.
We have put out own money into this and will return no profit. We just love Machen's work and want to see him in print at a reasonable price.
www.threeimpostors.co.uk
We hope it's ok to 'advertise' here. If it isn't please delete our post and accept our apologies.

Mark
For and on behalf of 'The Three Impostors'