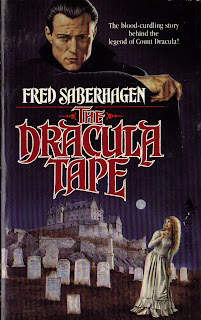 Recently I acquired two titles in Fred Saberhagen's Dracula Sequence series: the first one, The Dracula Tapes (Tor reprint May 1989, originally from 1975) and the third, An Old Friend of the Family (Tor reprint March 1987, originally 1979). Has anyone read 'em? I know Saberhagen is more of a science fiction writer than horror, but after I loved Anno Dracula I have to say, I'm not sure if I want another "re-imagining" of Bram Stoker's great villain - could it possibly be as good as Kim Newman's? Really, can anybody recommend these one way or the other? The cover art, by Glenn Hastings and Joe DeVito respectively, isn't quite doing it for me: it's too obvious, too determined, too specific, and man what is up with this vampire chick's Vulcan ears? 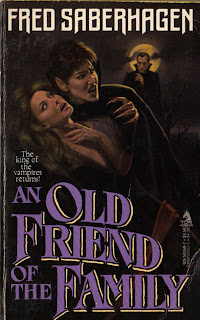 Posted by Will Errickson at 5:49 AM

I read 'The Dracula Tape' back in the 80s (earlier version, diff publisher, diff cover)and enjoyed it a lot. Of course, I might feel differently if I read it today. What I liked most about it is how cleverly it mirrored Stoker's novel yet succeeded in making Dracula the hero.

Another 'What If?' Dracula book I really liked was 'Sherlock Holmes Vs. Dracula, or The Adventure of the Sanguinary Count' by Loren Estleman. Certainly the best of the Holmes/ Drac books. Also hewed expertly to Stoker's book while still making Holmes' participation plausible.

Estleman also wrote 'Sherlock Holmes Meets Mr. Hyde', which has recently been reprinted by Titan Books. I'm hoping they get around to reprinting the Drac, too.

I enjoyed all of Saberhagen's Dracula books, though the first five or so are the best. An Old Friend of the Family is probably the best of them all, and that particular cover is awful. The second book, The Holmes-Dracula File is the second best, IMO.

Be on the lookout for Kim Newman's Anno Dracula : the Bloody Red Baron. I snagged an Advanced Reader's Copy...It is pretty fun.

I've read both of the novels mentioned here, "The Dracula Tapes" and "Old Friend of the Familya" but with different covers. I've also read "The Holmes-Dracula File" and I remember enjoying all of them. The horror element is lessened since Dracula is the hero here making them more Gothic thrillers than horror novels.