Hearts Full of Hell: Horror Anthologies of the 1980s, Part 2 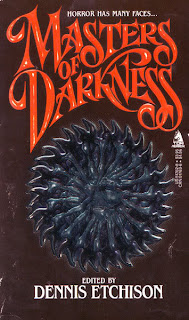 More modern horror mayhem in the form of short stories by all our favorites! Bookstore racks in the '80s were crammed full of anthologies published by Tor, Pocket, Berkley, and Avon Books; more, too, as everyone wanted in on the horror craze. Short fiction in particular highlights the genre, of course, and rather than simply anthologizing old classics by Lovecraft and the like, which seemed to be the standard for books in previous decades, all the newest - and biggest - names were featured. Some names have lasted while others, alas, have not. You'll see that the covers vary widely in quality and "quality." 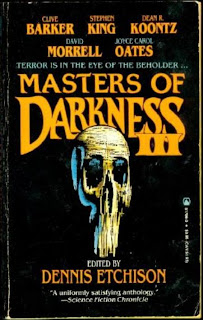 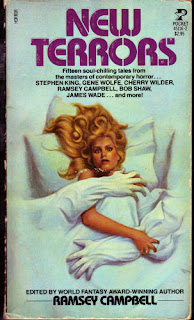 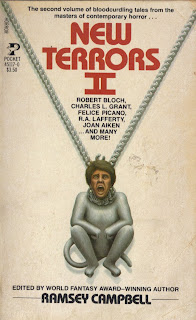 Now these New Terrors (Pocket 1982 - 84) from Ramsey Campbell, that's more like it! I particularly like the woman's blonde hair fanned out on the pillow as her bed comes alive... As for that poor guy who's become a monkey necklace - oof. Gotta find out which story that appears in! 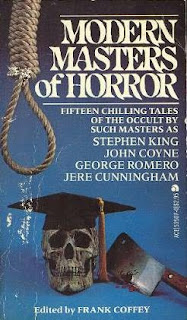 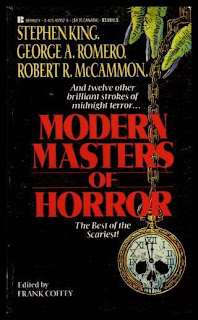 Really boring covers for the unimaginatively-titled Modern Masters of Horror (Ace 1982/Berkley 1988). I had no idea Romero wrote any stories... who's read it? Also contains stories by Masterton, Laymon, Hallahan, and Davis Grubb, who wrote the original novel Night of the Hunter (1953), as well as one of my most desired books (most desired because I came across a paperback copy about five or six years ago and didn't buy it), Twelve Tales of the Supernatural (1964). 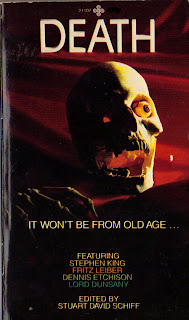 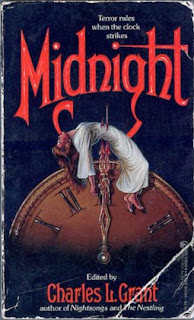 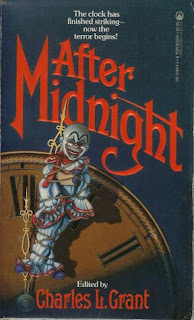 I rather dig these covers, both by Tor regular Jill Bauman, for Grant's Midnight titles (Tor 1985/1986), although that first one is kinda tasteless in a somewhat sexist way, what can I say? The creeepy clown is a great touch though! 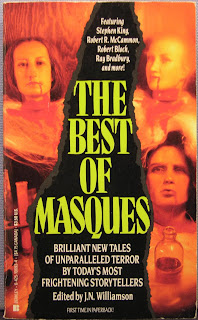 J.N. Williamson published the best of the best in his Masques series that ran throughout the 1980s, but only this last Best of was published in paperback in the States, in '88. Looking at the contents, I know all the names but not all the stories. Has anyone read King's "Popsy" from '87? I've been hearing about it for, oh, 20+ years... 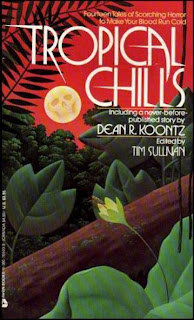 Tropical Chills (Avon 1988) features lots of science fictioners like Brian Aldiss, Pat Cadigan, George Alec Effinger, and Gene Wolfe (been meaning to read all those writers!). I've seen it on various bookstore hunts but never pick it up; Koontz's name on the cover turns me right off. Thanks but no thanks!
Posted by Will Errickson at 9:15 AM

I have that first Masters of Darkness paperback (and it is worn down in the exact same places on the embossed titles yours seem to be). "Neither Brute Nor Human" by KEW is my favorite tale from that collection.

Hmmm. I have most of those, but I don't think I knew NEW TERRORS II existed.

Ah, memories. I had all of those at one time. I think the only one I have now is the DEATH from Playboy Press. I loved the anthologies Grant did for them.

Have you done an entry on Grant's Greystone Bay anthologies?

I have the copy of Grubb's book you mention, in very nice shape. Also a copy of "Night of the Hunter". Wonderful stuff, he should be much better know than he is.

I have one of those GREYSTONE BAY books but haven't read anything in it yet. As for Grubb, I should find a copy of HUNTER as well, as the movie is a favorite!

That MODERN MASTERS OF HORROR collection is unique in that it has George Romero's short story "Clay," his only excursion (as far as I know) into fiction writing, with the exception of the DAWN OF THE DEAD novelization, where he's co-credited with Susannah Sparrow.

I had about half of those back during the middle 80s. The "Stars & Stripes" store always had an amazing selection of books.And what was best is that most of these had really good selections of stories. Especialy the "Master" and "Midnight" collections!

Ooh, I love the covers on the Charles Grant anthologies. Definitely gonna have to track those down.

I always loved those Playboy Press paperback anthologies by Charles L. Grant. HORRORS, TERRORS, NIGHTMARES... Simple straightforward titles with absolute schlock covers, but they were always filled with absolute gems. Therefore, whenever I'd happen upon a new one at the local drugstore or mom & pop bookshop, it was a treat.

And, even if there may have been one that only had a handful of good tales rather than being the usual chock full of 'em, so what? At, $1.25 - $1.50 a shot, it was STILL a helluva bargain & money well spent. Right?

Now, THOSE were the days...

I think like you that the cover for Midnight is tasteless in a sexyst way, and sometimes I wonder why horror fiction is mainly based (soecially on films) on violence against women

About New terrors, do you know if they did an omnibus edition or a selection? I think the cover for the first voulme is based on a story of Graham Masterton about a couple on their honeymoon and a haunted hotel room, do you know which is the story for the another cover?

by the way nobody like nowadays anthologies like the Mammoth books of best new horror by Stephen Jones or Best horror of the year?

Best horror of the year are edited by Linda Datlow