Headhunter by Michael Slade (1984): I Guarantee You That It Ain't Your Day - Chop Chop! 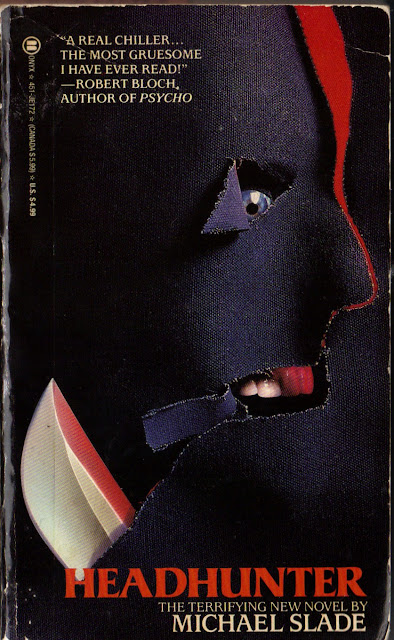 I got more than I bargained for with Headhunter, the debut novel from Michael Slade (a pseudonym for several Canadian criminal lawyers, mainly one Jay Clarke). It's much more complex and wide-ranging than I'd anticipated, less cheesy, smarter and more ferocious too. The Royal Canadian Mounted Police are after a brutal killer in Vancouver who decapitates women, sometimes sexually assaulting them, then places their heads on spikes... and then takes a picture of that to taunt the law with. The RCMP team is led by the haunted Robert DeClercq, a great and respected detective who retired after a tragedy involving his wife and daughter; he is now back doing what he does best. But at what price? 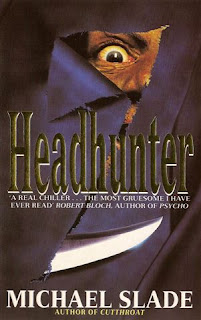 What feels like dozens of characters and impressive set pieces of murder and fright are crammed into the 420 pages, as well as lots of detailed forensic and surveillance science. Decades-old events feature into the narrative, some more obviously than others. Great details of Vancouver city life, of New Orleans decadence, of frigid 19th century Canadian wastes are presented in which the reader can get lost. There's a voodoo ceremony and LSD trips and whole lot of graphic S&M and mutilation. The author(s) even throw in '70s British punk rock, using the Clash's tipply classic "Jimmy Jazz" as a clue (the lines "Cut off his ears and chop off his head/Police come looking for Jimmy Jazz..."). 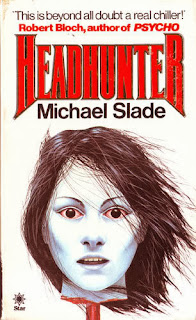 Slade's novel is a melange of behind-the-scenes police procedural, horror fiction tropes like decapitation and voodoo ceremonies, and true-crime serial killer exposé. But Slade definitely goes for a supernatural mood in several scenes despite writing a an otherwise completely realistic, if overheated, thriller. You won't find that in James Ellroy's works, when he upped the crime-horror ante with novels like The Black Dahlia and L.A. Confidential; I suppose that's why Slade's books were generally found on the horror shelves. The cover of this Onyx paperback from '86 is creepy but not all that eye-catching, although I'd say the quote from the author of Psycho is apt. 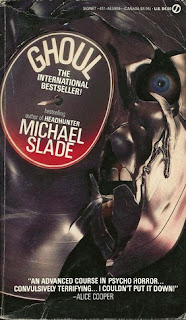 Anyway, there was lots to like about Headhunter, it definitely brings the '80s horror goodies, but by about page 300 I was a bit exhausted. I didn't mind the textbook-like pages on voodooism, serial killer psychology, the cannibalism of Native American tribes, even the international drug trade (this is one of those novels that includes a bibliography). But the scale, the twists, the complexity started to wear on me. Characterization is rich in some places and quite thin in others, and that narrative that skips about had me flipping back through pages, trying to remember someone's name or some plot point I might've only skimmed. Slade has continued in cult popularity, still writing, still publishing gruesome crime thrillers, and I remember seeing lots of his books around back in the day (Ghoul from 1987 seems to be a particular favorite of horror fans). Headhunter is pretty cool indeed but be prepared for some iffy acrobatics as Slade tries to keep you guessing to the very... last... sentence.
Posted by Will Errickson at 2:41 PM

There was a movie called HEADHUNTER from the late 80s that I think was based on this book, Will.

I bought this book the moment I saw it. Other books by team Slade weren't as good, but this one ... wow!

Phantom - I couldn't find anything about a movie based on HEADHUNTER from the '80s, but apparently filmmakers have recently tried to adapt it, unsuccessfully.

Doug - Cool. But GHOUL is definitely on my to-read list.

Holy flashback--I haven't thought about Michael Slade in years! I read GHOUL at some point in the early 90s and, as a big-time Shock Rock fan, I just loved the hell out of it. The Slade books are just so weird and gross and tonally bizarre that they beg to be loved. Definitely worth tracking down that title, and I recall RIPPER being fun as well, in a similar vein (that one had some "Final Destination"-esque Weird Death Scenes in it, if memory serves).

I think it was a Fangoria review for this film where the novel was referenced? I'd have to find the issue to verify, but the novel isn't specified in the above IMDB listing.

Yeah, Phantom, I saw that listing but only saw the Miami part and dismissed it. Sounds more like Slade coulda sued for infringement.

I remember Ghoul being really good, but then didn't enjoy the other titles these authors wrote as much. They weren't bad, they just didn't have the same feel to them. I never did get a chance to read Headhunter though. I will have to pick that one up because it sounds really good.

I read "Ghoul" back in the late 80s when i was still in the Army. I liked the killers ravings about HPL and the kinky sex and twist end. It was fun and trashy.

Wow. I hadn't seen the head-on-a-stick version of Headhunter until now. Yikes!
http://www.specialx.net/

Check 'em out. They're all a bit different from each other but they are excellent. And if you've read Headhunter definitely check out Primal Scream which revisits some of the loose ends of the original.

I read this book in 1989 and by the time I was a little more than halfway through I had correctly guessed the killer. It's really quite a trite book if you compare it with more accomplished crime fiction.

Bill, I agree with that completely! That's why I noted the Slade's "iffy acrobatics" in hiding the killer's ID--in good serious crime fiction the author's sleight of hand technique is subtle and nearly invisible. Indeed, that's why his books are on the horror shelves instead...

Bill and Will, to be honest, I have guessed the Killer in many crime authors books, from Michael Dibdin to Robert Barnard, Aaron Elkins, Julie Smith, Bill Pronzini, and the list goes on, I really do not see how that small issue could ruin the pure thrill ride of headhunter (I didn't guess the killer that quick). The difference between those authors and Slade is the level of pure gore and grotesque scenes, nothing is left on the table in Headhunter, Slade brings it, and brings it in spades. It's all subjective, but the point brought up here is minor when reading this book.

I was kind of left cold by the last two horror paperbacks I read, but reading “Headhunter” was a blast.

I think foremost it’s an interesting time capsule. “Headunter” wallows in depravity (even a sometimes cartoonish version of it), and back then that made fans of this sort of thing a marginalized group, so much so that, in the ‘80s, something was thought to be wrong with them. Now, said depravity has been totally mainstreamed. After all, “I ate his liver with some fava beans and a nice chianti” has basically been a catch phrase for a quarter century.

So yes, “Headhunter” is dated, but I think it’s dated in the best possible way, i.e., it was ahead of its time.

I just picked this one up on a whim (first edition) from my grocery store charity book bin tonight!

Anybody catch the Headhunter Reimagined (2018)? Curious of your thoughts if so. I haven't read the new take, and am not sure I will pending other books to get to...but intriguing.