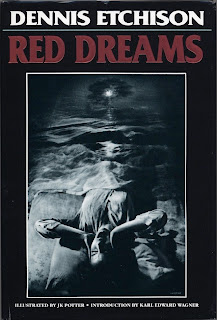 Birthday greetings to horror editor and author extraordinaire Dennis Etchison. Above is the 1984 Scream/Press hardcover of Red Dreams; the paperback edition has been on my want-list for awhile now. Below are Shadowman (Dell/Abyss Feb '93) and California Gothic (Dell '95), which I have not read. But his The Dark Country made my best-of-2011 list, and Cutting Edge is a very good, very eclectic '80s horror anthology. 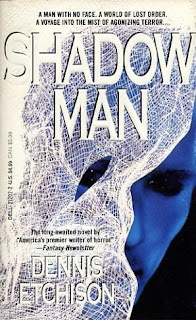 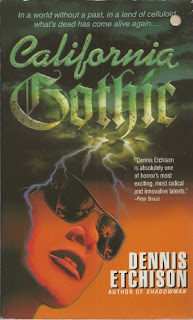 On to other stuff: how about some horror fiction help? Couple emails I've received in the past month or two here:

Nick writes of a book, about a family moving into this house and they had a son who seemed to be the protagonist that had to deal with the monster or ghost. Cover was a picture of a house and I believe the house was twisted and looked like some kind of demonic face...

John writes, A family moves to New England. Wouldn't you know it, the oldest son soon grows distant and more reclusive, eventually moving into the basement. The family is content to leave him down there, listening to his music and being a teenager. Eventually he paints the basement all black, blacks out the windows, etc. At the climax of the novel, a parent (the mother?) goes down there to find that he is just about to open a portal to hell, assisted by a few red-robed supernatural beings doing some kind of supernatural incantation over a supernatural altar. The parent is able to disrupt the ceremony, portal to hell closed, fin. The book would have been published in paperback sometime between 1994-1996. As I recall, the cover was purple with the outline of a house in the foreground.


Also: yesterday I spent three hours at the Wake County Public Libraries Booksale - and oh my god, what vintage horror paperback treasures I found! I wasn't in the horror section but oh, five seconds before I'd found several of my most sought-after titles. Many were in mint condition, as if they been vacuum-sealed for decades. You fellow obsessive book-buyers will know the feeling of disbelief and excitement that accompanied my visit. Tables and tables of paperback horror amidst tables and tables and tables of books in an enormous warehouse. Gobsmacking. You'll have to wait, though, to find out what I bought - all for $2 each! Right now I'm in the middle of a Dell Abyss paperback as well as reading stories in another great anthology. Hope to have some reviews up by next week!
Posted by Will Errickson at 12:05 PM

Eager to hear about your finds.

Doesn't release much, though.

Hmmm. That CALIFORNIA GOTHIC cover doesn't ring any sort of bell; not sure I own another edition (if one exists) or not. Pretty sure I've got his other paperbacks (that I know of), though, RED DREAMS included.

Just got California Gothic among 300 other 70s 80s obscure horror books at a garage sale (a few signed). Will let you know if it is cool. I love your blog. Sadly, I cannot get comments to come to my email. Also per your other post of top books of 2011, I am rereading Silence of the Lambs after finishing Black Sunday. He vastly improved in b/n those books. Wow. I am going to run the gauntlet and re-read Hannibal and then probably groan through Hannibal Rising. I am not thinking it will be fun...but hey a completist has to pay a price. Keep up the excellent blog. (Btw, I am a librarian, and if you have a list of bks for me to keep an eye out for you, feel free to send. We have library sales behing the building every 4 weeks and pbs are a dollar. Also, I worked at a used books store that has three locations and they give me the 50% discount...so happy to keep an eye out. I have enough of my own -- not so much a collector here but more just a reader.)

I meant pbs are a quarter. My bad.

Sigh..one last comment. I got my comments fixed. I can get responses now. Sorry to all for the triple comments and slight ramble. I love all the commenters' thoughts here. Neat place. I think Will should write a book.

Jeremy, sounds like a great haul. Personally I did not like HANNIBAL at all, but I can't wait to reread & review RED DRAGON. I'm so glad you're digging the blog! A book, you say? Perhaps in the far future...

I know this post is old, but I think the answer to Nick's question may be NIGHT THINGS, by Michael Talbot (1988). The synopsis fits, and the cover description is very close. https://www.goodreads.com/book/show/1345190.Night_Things

Here's the Kirkus Reviews summary, which is much better than the ones on Goodreads: https://www.kirkusreviews.com/book-reviews/michael-talbot-7/night-things/

Too bad Nick probably couldn't give a crap now but, who knows, maybe he'll check back.