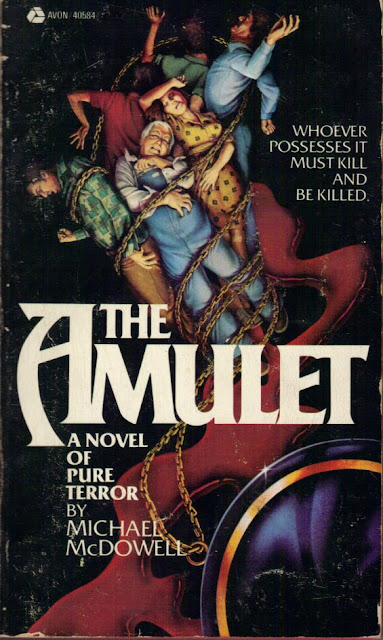 Michael McDowell's first paperback original horror novel from Avon Books is, simply, a must-read for us horror fiction fans. Set in Alabama during the Vietnam War era, The Amulet begins with a devastating moment of violence on an army firing range and ends with a chill whisper as the circle closes. In between is an exquisitely drawn depiction of class and racial strife in small-town Southern life... and death. The first five or six chapters are told with little to no dialogue, just McDowell masterfully spinning a tapestry of the harsh realities of the unforgiving people and landscape of Pine Cone, Alabama.


But it could be said also that there is a great vitality in the mean-spiritedness of the town's inhabitants. Sometimes they are creatively cruel to one another, and there were seasons in which Pine Cone was an exciting place to live--if you were a spectator, and not a victim.

Twenty-year-old Sarah Howell works on the assembly line in the munitions factory, endlessly putting in three screws into the rifles that will go off to the boys fighting on the foreign front lines. Her husband Dean was to be one of them, but it's what happens to him in the prologue that sets the horrific events in motion. He isn't killed but he might as well be dead; his face is swathed in bandages and his brain has been nearly pulverized. Sarah and Dean's mother Jo care for him now in Jo's home, and Sarah bitterly realizes her permanent widowhood in which she must always bear her husband's corpse at her side. 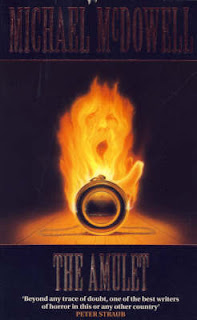 A word about Jo Howell: repulsive. She's Jabba the Hut in human form, an obese, ugly, lazy, hateful, petty, manipulative, bickering old bitch who makes Sarah's life hell... and with the titular piece of jewelry that she gives to an old friend of Dean's, she practically razes the town and the factory down to the very dirt that people strive so hard to rise above. She may profess ignorance of the powers of the amulet and its origins, but Sarah pieces together the evidence of Jo's outrage at Dean's condition and what made him that way, and the unbelievably violent and meaningless deaths of the innocent that tear through Pine Cone this hot summer of 1965.

Take a look at the cover image at top from Avon (thanks to the great fantasy illustrator Don Ivan Punchatz). You're getting exactly that! The amulet gets passed inadvertently from victim to victim; Sarah nearly goes out of her mind with fear trying to figure out just how that happens. With her superstitious next-door neighbor Becca, they try to track its path, but can never quite manage to stop the amulet's power. Effortlessly McDowell lets us into the minds of the people who wear it, and how it suddenly makes them commit the most horrible deeds - horrible deeds that seem all too rational to the people who perpetrate them: the mother who cannot stand her screaming children, the wife who realizes her husband is cheating on her, the teenage babysitter who just knows how to discipline an infant...


Yep, The Amulet is a near-perfect example of a paperback original horror novel—even its cover art, by Don Ivan Punchatz, is a great representation of the genre. Author McDowell graces us with a truly despicable villain, a sympathetic heroine, a vivid and engaging sense of place and time, and yes, scenes of unsettling, inventive violence and horror and bloodshed. The innocent suffer, yet perhaps no one's hands are clean; the factory that creates mechanisms of death and employs so many in the town stands in for our complicity in the violence that stains not just faraway lives but those in our very own homes.

Obtain The Amulet by any means necessary. 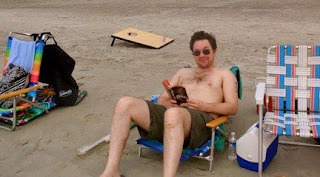 Quite literally, The Amulet makes a great beach read!
Posted by Will Errickson at 8:45 AM

Great review, Will. The Amulet is a sweaty and mean book. So glad to know another McDowell fan. Now get The Blackwater series and get to reading and reviewing! It's another delicious slice of small town Alabama.

I've got this book, but *insert broken record here* haven't read it.
Somehow though, you turn a cheesy looking pulp paperback of passing interest into something I really actually want to read.
Stupendous.
BTW - I featured you on my site in the Daily Radness section, for the month of May. I'm definitely into spreading the awesome. Or in this case, the horror! The horror!

Tressa, I'm on it! Spread the horror, Kat! Thank you for your appreciation. I mean really, spread the fucking horror indeed.

I just read this one last year. It was on Stephen King's list for must-reads (and I've gotta say the title and the cover wouldn't have drawn me in on their own abilities because it all seemed like very generic marketing). But I couldn't believe what a great read this was. The relationship between the mother and her bed-ridden, mummified-to-the-eyeballs son made for a creepy cutaway story. I tried McDowell's COLD MOON OVER BABLYON next, and while it's similiar, it's a bit slow. And I just came across BLOOD RUBIES by Alex Young (McDowell writing under a pen name with another author). Apparently it's a parody of Sidney Sheldon novels, and it does well as such, but after half-way through it's apparent that he forgot to add the horror promised by the cover and the title.

Everyone must read the Blackwater series - it's really the best. I'm going to take The Blogger's advice and get a copy of The Amulet soon for my summer vacation (alongside McDowell's Gilded Needles, which I'm saving for said vacation). A book called KATIE is supposed to be yet another good McDowell horror tale.

Will, Don't you look the picture of ease on the playa all wrapped up in your AMULET!

BTW: I've been hearing about the amazing McDowell for years now but for some reason have yet to find the books I want to read by him. The AMULET being one of them. The BLACKWATER SERIES is the other... But BOY are they hard to locate used. Since they are out of print I guess I can search online but I'm so picky about my conditions that I hit snaffu's there too...guess I'll just bite the bullet! Since I've agreed with your views on everything else here so far ! This is a def MUST!

This is an amazing book. I actually don't like the cover very much (although the little Farmer Brown guy with a single fist clenched as if railing at the gods gets me every time), simply because the cover looks so . . . cheesy, while the story itself has some truly excellent, gruesome writing.

I love McDowell simply because he knew he was writing schlock, and he didn't care. Really. He stated this himself. But by God he was going to write the best damn schlock he could, and it shows; his turns of phrase are just so gorgeous, his eye for the grotesque was spot-on. I also really loved his posthumous CANDLES BURNING (completed by Tabitha King), although I'll admit, it took a little while for it to grow on me.

I agree about The Amulet. It's one of my favourite McDowell books, the other being Blackwater and... Blood Rubies: I completely disagree with the assertion above that it doesn't live up the horror promised. For me it's McDowell's most nightmarish novel after Toplin, and absolutely riveting throughout.

Well then I'm glad I've got a copy of BLOOD RUBIES on my shelf!

WICKED STEPMOTHER, the other "Axel Young" novel, on the other hand, is a disappointment that fails to deliver on just about every level, unless what you're looking for is limp, plodding and dated satire.