Tales of the Cthulhu Mythos, Vols. I and II, ed. by August Derleth (1969): Just Another Dream of Death 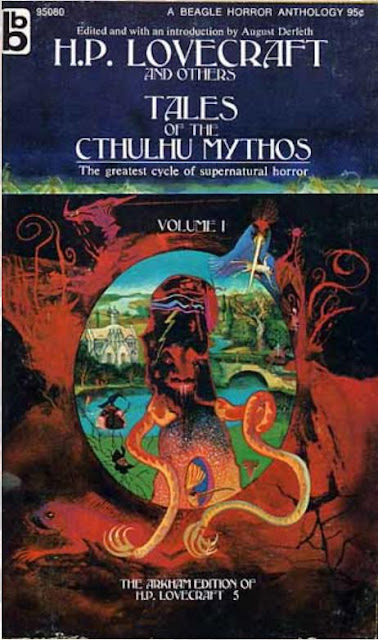 Actually it's been some decades since I read these classic Lovecraft-inspired anthologies, Tales of the Cthulhu Mythos, and over the years have sadly lost my copies. Weird, surrealistic images on these, bespeaking of the general madness, terror, and disorientation of a reality that should not be. The first volume includes Mythos tales by the mighty likes of HPL himself, Conan creator Robert E. Howard, Clark Ashton Smith, Robert Bloch, J. Vernon Shea, Frank Belknap Long, Henry Kuttner, and editor Derleth. The second has more Lovecraft and Bloch, Brian Lumley, Colin Wilson, and Ramsey Campbell. I daresay you cannot go wrong with either volume, although I remember the stories do vary in quality. However, in Derleth's intro, he states "It is undeniably evident that there exists in Lovecraft's concept a basic similarity to the Christian Mythos, specifically in regard to the expulsion of Satan from Eden and the power of evil." Yeahhhh... no. 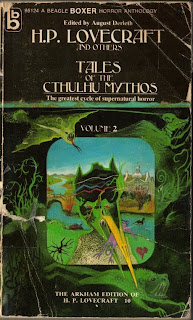 These first two paperbacks, from Beagle Books, May and June 1971 respectively, are adorned by Victor Valla's insanity-inducing cover art. Below you see the Ballantine Books reprints from 1973, with covers whose art I've never totally understood or liked (neither does this fellow), from John Holmes. There was a Del Rey reprint of both volumes in one in 1998. But you can find these old editions used on eBay and Amazon and elsewhere, usually around $10 to $15. It's worth it, for these are the kinds of old paperbacks that exude that inimitable old-book smell, one of dust and mold, of dreaming death and deathlessness, where one dwells amidst the wonder and glory of the Old Ones forever... 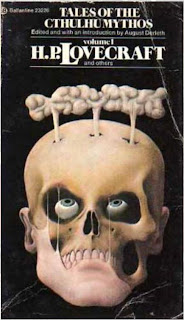 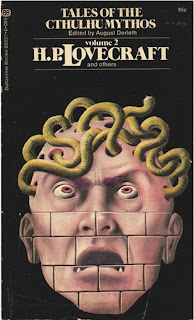 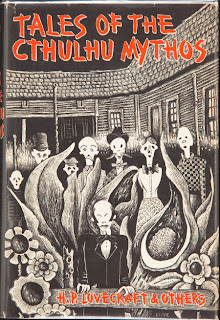 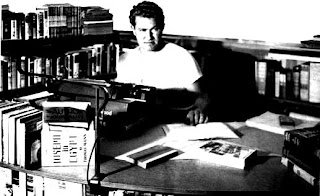 I've always liked the Ballantine "face" covers, but probably because I was raised with them. When I was in about first grade my mom (wise woman!) used to take me to the bookstore and let me pick out almost anything I wanted, even if it was "too old" for me. That's how I got such things as Wagner & Wise's _Great Tales of Terror and the Supernatural_ and several of those Ballantine Lovecrafts. I picked them out because the covers were scary (at least at the time... some look silly now, although the ghostly face on _The Lurking Fear_ and the acid-dissolving glass-impaled thing on _The Shuttered Room_ are still not bad), so I got raised on Lovecraft (and those other authors mentioned here) from an early age, thanks in part to those covers.

And I know exactly the book-smell you mean... one of the world's greatest scents.

I liked those Ballantine covers too. I've got that Tales of the Cthulhu Mythos Vol. 2 around somewhere. Looking at them now, they remind me of Terry Gilliam's animations from Monty Python's Flying Circus.

My first exposure to HPL paperbacks were the early '80s Del Rey paperbacks with Lovecraft's name in red and Michael Whelan's art. Indeed, it was my mom who picked out The Lurking Fear for me! So I guess for me those are the "definitive" ones.

Those "face" covers are what I remember the most. I was hooked the first time I read one.

Except for one sf book club compilation, most of my Lovecraft books are the Del Reys, with the Whelan covers. Those are fantastic. The first thing I do upon purchasing any book, is open it to somewhere in the middle, and take a deep inhaling sniff. I love the smell of books, old or new!

mmm... the smell of books. I grew up with it. I had a huge library when growing up. Our living room walls were almost completely covered in books. My father made shelves himself, fitting them perfectly from floor to ceiling all across 3 of the walls.

And how I love HPL and the other arthours mentioned here, Robbert E Howard especially.

I love the graphics in general, but I think they take away from Lovecraft's actual work. They make it seem so much sillier than it's intended to be.

Mark, I agree. I don't even think a lot of the Arkham House hardcovers have all that effective cover art.

I think the Ballantine covers are great. They may not be very Lovecraftian, but they certainly are distinctive. I have Volume II and I'd love to find Volume I.
I've never seen the original covers before - thanks for sharing.

It was reading the original hardcover edition of this book that fill'd me with an ache to become a Mythos writer. The book intoxicated me with its great tales, the recurring lore, and the sense of real fun that is, for me, a huge ingredient in writing Lovecraftian fiction. At the same time I read Derleth's original edition, I read Lin Carter's LOVECRAFT: A LOOK BEHIND THE CTHULHU MYTHOS, and that encouraged me that the Mythos was a kind of fictive club that anyone could join; you just invent your own Great Old One, your own Forbidden Tome, and your own Dunwich or Arkham. I then began to correspond with some of the last living members of the Lovecraft Circle, some of whom wrote the stories that Derleth publish'd in TALES OF THE CTHULHU MYTHOS. Thus was passion born, and it burns brighter to-day than it did back then in the early 1970's: I live to write Lovecraftian weird fiction! Ia! Yog-Sothoth!

Mr. Pugmire, thank you for sharing your unending passion for Lovecraftania!