Lifeblood by Lee Duigon (1988): Nights of the Vampire 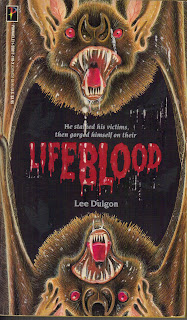 Leave it to a cheap-looking '80s horror paperback from Pinnacle Books to feature ridiculous cover art of a demonically leering rabid vampire bat ready to attack… in a vampire novel that denies that vampires can turn into bats. Repeatedly and without doubt. Of course, this tacky cover was the only reason I even bought Lifeblood, a book I’d never ever heard of before, nor did I have any familiarity at all with author Lee Duigon. So it might please you to know it’s not nearly as cheap or tawdry as its cover would lead you to believe; while Lifeblood is clearly no lost classic, it’s a fairly readable 'Salem’s Lot-lite that doesn’t try to be ambitious, nor does it insult readers’ intelligence with unbelievable coincidences or poor hack writing. Well, it might have some hack writing but nothing that’s gonna make you want to toss the book in a corner, cursing at its stupidity… like some horror I’ve read.

Like countless horror novels good and bad, the prologue occurs decades before the action proper begins. Then, chapter one, standard well-to-do small-town America, drawn in fair detail by Duigon, who studied political science and journalism, which serves him quite well in laying down the specifics of Millboro, New Jersey. Into this sane and polite society - which of course masks a den of hypocrisy - comes vampire genius Dr. Emerson, a strangely obese member of the undead who was once a brilliant doctor, and who now uses his scientific training to learn more about the physiological nature of his supernatural powers as well as the mechanism of turning humans into creatures of his ilk. His human companion is Blanche, formerly one of his nurses, who has killed dozens of her patients over the years, releasing them to God, as it were. Raised by fundamentalists, Blanche is terrified of eternal punishment for her unthinkable crimes and hopes one day her Master will do as he’s promised: make her one of the immortal undead. 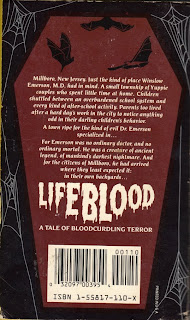 Here Blanche was, a murderer many times over, and the songs offended her. The lyrics touted incest, abuse, even child molestation. Suicide. Drugs, drugs, drugs. And devil worship too. Blanche’s religious sensibilities could not be described as highly developed, but she hoped she would never sink as low as devil worship.

This effort of course fails miserably. But a nosy old investigative journalist or a lonely woman ignored by her career-obsessed husband and is now about to embark on an affair with the beleaguered police chief (what the hell is with all these not-quite-dead yet rotting bodies turning up?), might make better candidates for Emerson’s experiments. And yes, there is an aged “man of God” on his trail, a wizened old priest with many miles and horrors behind him, and now determined to end the vampire’s life as he nears the end of his own.

Duigon is an okay writer, but he spends too much time on some intricacies of small-town government and lackluster characters than he should; some sections read like first drafts, dialogue is patchy, and the image of a fat vampire simply doesn’t feel right. I definitely skimmed some chapters; the novel could be tightened up by 30 or 50 pages, maybe. But the pacing is generally solid and the climax, while beginning as cliché when three reluctant vampire hunters descend into the Master’s lair, is still pretty cool with a nice touch of originality at one point. The final chapter? A bit of blackly-humored comeuppance that I wasn’t expecting but is indeed welcome. As for front and back covers, we’ve all seen worse, but the art is unfair to the story itself, as is the off-puttingly generic title. Still, all that worked, no? I bought the book for those very reasons! Irony, s'good for the blood.

Posted by Will Errickson at 1:22 PM

Apparently somebody thought it would be a good idea to appeal primarily to the "scary bat" fans, even to the extent of playing down the vampire aspect. I guess they had different priorities in those days. Today any attempt at a book about killer vampire bats would probably need to have a group of pallid but attractive & well-dressed teens on the cover, staring off into space with expressions of dreamy intensity.

Or a cartoon girl wearing sunglasses at night in a miniskirt and heels holding a martini glass full of blood.

This is the best blog ever. I've gone through the entire archive and it's been a great stroll down memory lane.
A suggestion? a 1980 horror novel called The Orphan, by Robert Stallman. It's part of a werewolf triology, except the beast has the ability to invent human identities to suit whatever situation it is in. It's a great read, if you haven't read it already. Great cover art as well.
Mac Campbell
www.iwritehorror.blogspot.com

Wow, thanks, Mac. I've added The Orphan to my list of books to look for; I'd never heard of it at all. Amazon reviews are quite good. Please send me any other suggestions too if you have 'em!

An "okay writer"? Ouch! That smarts. Still, it's better to be remembered than forgotten, 1986 was a long time ago, and I'm glad you enjoyed the book as much as you did. And by the way, you have a super blog!

Great review! I was reading LIFEBLOOD when this blog came to my attention. I read it back in the 80's and then re-read it recently--I enjoyed it.

I can recommend THEY THIRST by Robert McCammon and WOLF'S HOUR by the same. A vampire in the first and a werewolf in the next--top-notch 80's horror that I must have read a dozen times back then!

Now I'm off to see what else you've been reading... Thanks for posting!

Thanks for stopping by, Mr. Duigon! I guess "okay writer" does sound harsh. My point was more that the lurid cover might lead one to believe that book would be terribly and lazily written and imagined, and it's not at all. Now I'd like to find a copy of SCHOOLHOUSE...

Late to the party again.

I really enjoyed this one back in the day, specifically BECAUSE of the corpulent scientist vampire. He was a breath of fresh, uh, fetid air.

And I have fond memories of the stereotypical nosy neighbor who turned out to be a great character.