The Orpheus Process by Daniel H. Gower (1992): Death Machine Infest My Corpse to Be 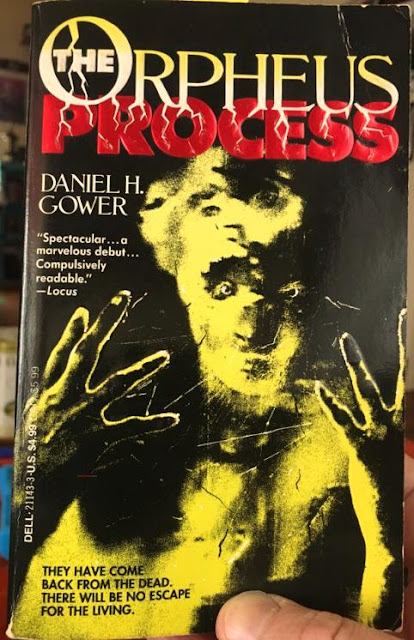 Occasionally I read a horror novel that buggers my critical facilities, and I must ask myself that age-old question: is it so bad it's good, or is it so bad it's simply terrible? I know what I like and what I don't, but what if those things are wrapped up together? Which aspect outweighs the other? Is it so important that I know? Take the first novel by Daniel H. Gower, a paperback original from the fabled Dell/Abyss line entitled The Orpheus Process (Feb 1992). A story of medical horror and reanimated corpses, it features one cliche after another, with impossible dialogue, unbelievable motivations, iffy characterization, leaden attempts at black humor, tasteless over-the-top gore, wonky "science," and an exhausting climax that seems to go on and on. But. But.

I cannot tell you the last time a novel kept me reading more (I kind of agree with the various blurbs on the paperback; it is compulsively readable!). I enjoyed the hell out of it, good and bad alike. Gower's style has energy, conviction, and forward thrust, even accounting for lapses into amateur psychology, weak analogies, telling and not showing: first-novel flaws all present and accounted for. Orpheus Process goes to dark places of nihilistic blasphemy, and often what it finds there is unbearably silly, other times it touches on real existential dreads, plumbing deep into nightmare psyches. I loved the over-the-topness of it even when wrong-headed, its death-in-the-midst of life scenario, and all the sickening metaphysics of a biochemist playing God with his "reanimants." Welcome to the abyss indeed.

Dr. Len Helmond turns his family life into a hellish hash and the reader is along for the ride. There's lots of family drama in Orpheus Process, believable on the face of it but Gower's depiction of conflicts strains credibility. Helmond's relationship with wife Janice is somewhat rocky; his teen daughter Ally is going through a Goth phase; his beautiful lab assistant Sharon has the serious hots for him; and his experiments with reanimating animals in a university lab have been gross failures. Then one rhesus monkey, all-too-obviously named Lazarus, comes back seemingly normal...

Laz is so normal in fact Helmond does then what any good scientist would do and takes the creature home to his family. I mean what. His two younger children, seven-year-old Eunice and five-year-old Andy of course love the monkey. But its mind, its incomprehensible little monkey mind, has seen things on the other side that will destroy its sanity, and its body is changing in all kinds of incomprehensible ways due to that fancy violet amniotic fluid Helmond's created. Things take a turn for the worse: Ally is involved in a car accident with her boyfriend; we meet deranged Vietnam vet Cully Detwiler; and Helmond reanimates Osiris (duh!), a chimpanzee. None of this, you can expect, goes well at all. I mean, it all turns to absolute shit. There's even an impossible decapitation! 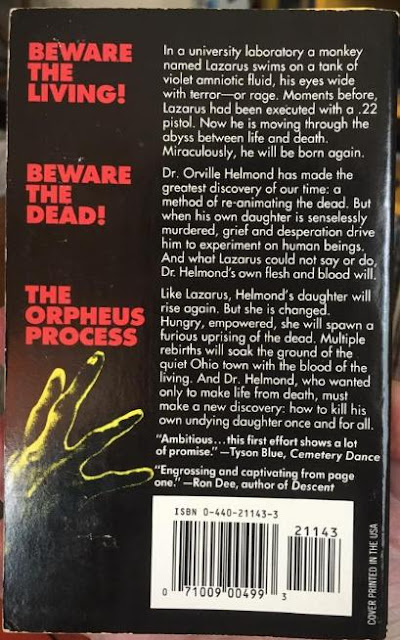 Little Eunice is killed on Halloween night when Detwiler goes on a maddened shooting rampage at an ice cream shop. Improbably Helmond is able to grab up her bullet-riddled body and toss her in the trunk... then zooms off to his lab to reanimate her. But of course! The rest of the family is away visiting grandma so isn't that convenient? Helmond successfully revives Eunice, the energized solution heals her wounds, and Helmond hopes his wife won't notice anything amiss with her reanimant daughter. This is not to be: Eunice's necromorphosis, however, is not into living death, but into hyperlife. She is becoming a totally new kind of life-form...

In her new state Eunice has gone beyond madness after peering into the reality that lurks beyond death; she out-Goths her sister Ally with her disturbing sketches (She must be watching a lot of horror movies the older sister muses) and Helmond finds the little girl's notebook, filled with mind-chilling philosophy:


I have experienced the unity and tranquility of nothingness, the absolute knowledge of the universal abyss... I have tasted the annihilation of all human feeling... I have been on that darkest of all levels of existence, the complete void of mind and soul... I know that supreme unbearable truth, have seen the agonizing revelation when the thin veil of materiality is pulled back, when the skin of the night is torn open to expose the pulsing primal core of the universe... Gower doesn't quite seem to realize the enormity of his own creation; a few moments of levity or a better understanding of the horror and taking it even more seriously would've been welcome. When confused, horrified townspeople and police confront Helmond about, well, all the blown-up zombie parts outside his house, his response is "Look folks, it was an accident." That kind of incongruity—and there are plenty—really grates on me as a reader. After Laz the reanimated monkey nearly kills Janice, she says to her husband "You almost killed me, you know?" and he responds "It was an honest mistake." I mean WTF: this is not how humans in extremis talk, think, or behave (an all-too common flaw in the genre). For horror to work, the characters have to react realistically; otherwise it is all just a barrage of nonsense.

But I loved the lair Eunice builds for herself in a graveyard, a necropolis of noxious fog and reassembled corpses beneath the earth:


It was a chapel... dozens of empty caskets arranged like pews, and against the far wall Eunice luxuriated on a throne made of human bones surrounded by an altar constructed of the decomposing parts of a hundred corpses, torn apart and jumbled together in a collage of carnage... "Nothing in the world seems quite alive, but nothing in the world seems really dead, either."
To emphasize her point, she casually waved the back of her right hand at the mural of twisted, decaying shapes behind her, momentarily infusing them with a violet corposant glow, and several eyeless skulls chattered like novelty teeth while intestinal tendrils flailed around them. 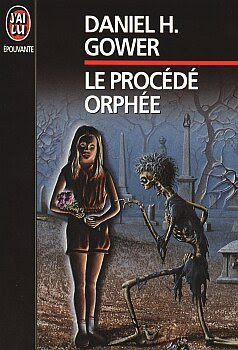 I've still only summarized about half of the events in the novel. The climax is so over-the-top it's proto-bizarro, evoking the nightmarish landscapes of Lovecraft's darkest fantasies, the cosmic nihilism of Ligotti, but with a dour tone that some may find off-putting (his appropriation of Ligottian themes is unsubtle, crude, even banal in places: "Did God fall asleep and have a nightmare?"). Eunice's reanimated monstrosities, demented and deformed, could be out of Barker but are described without his deft touch; ideas about death and resurrection read like Pet Sematary on cheap speed and weed (was Jesus the Nazarene a hypervital reanimant?!); Helmond's weapon of choice when attempting to kill Eunice is played straight by actually belongs in an Evil Dead sequel.

In spite of all the novel's faults, I feel justified in recommending it. There's just something so batshit crazy here, reminding me of that Masterton style of not letting plausibility factor into the storytelling. Ambition is part of it; Gower goes for broke, unleashing a farrago of grotesqueries parading by in an endless loop of madness (you won't forget Janice's midnight walk to find Eunice). As the title implies, elements of Greek tragedy are shoehorned in, as are references to Frankenstein and Repulsion. The final chapter, how could it compete with what's gone before, but I think it kinda worked in a redemptive manner: Her father had been an ingenious, doomed man, and she still loved him in spite of everything... 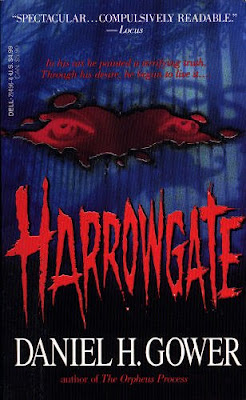 Gower, who published only one other novel, Harrowgate, also from Abyss, in 1993, now apparently self-publishes science fiction on Amazon with hand-drawn cover art.

Even better: he now self-published science fiction on Amazon with straight-up traced images of Scarlett Johansson as Black Widow for the cover art.

Great review, as always! I remember really liking this book a lot at the time. There just wasn't that much zombie fiction around before Brian Keene kick-started the genre again, so an undead book was a welcome thing. I don't remember the writing being terrible (although I was a lot younger then and doing some terrible zombie-related writing myself, so it may have gone by me) but I do remember it getting pretty over the top. I seem to recall some scene with a corpse breaking down into components and filling a room with slithering organs and veins and such, which struck me as pretty silly. It's been decades since I read it, but I remember it being pretty great by my younger-at-the-time standards. I should probably give it a re-read.

I'm wondering if those hand-drawn e-books on Amazon could really be the same guy? I mean, from Abyss -- which was the top-of-the-line in those days -- to what looks like some high-school kid's fan-fiction? There are far deeper abysses than Abyss, I guess... :)

"...scene with a corpse breaking down into components and filling a room with slithering organs and veins and such, which struck me as pretty silly."

Yes. This happens. If Gower were a better--or indeed, a worse--writer, scenes like this would have been mind-blowing. It's still interesting to read, but man, what coulda been...

Yeah I remember reading this book in the 9th grade. On of the creepier things I remember was Eunice having a child's head and an adult body.