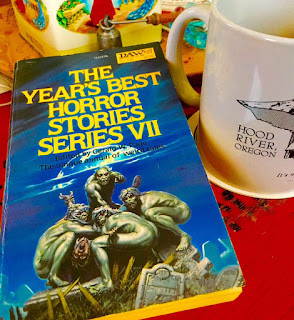 Don't worry, TMHF readers, that you've missed my reviews of previous entries in the long-running anthology series The Year's Best Horror Stories; this one, Series VII (DAW Books, July 1979), is the first one I've read in its entirety. I own only about half of the entire run, dipping into them here and there but never committing to a full volume. Till now, and I couldn't even tell you why this one, exactly. Sure, the cover featuring a ghoulish repast by the esteemed Michael Whelan is striking to the eye...

During this era, many paperback anthologies still included "dark fantasy" under the rubric of horror (DAW Books was a science fiction/fantasy publisher). "Dark fantasy" means to me fantasy, of course, but with major elements of the macabre and grotesque, with a fair amount of violence, usually with a medieval or mythic atmosphere and setting. The language too is often archaic, formal, stilted even. There may be sword 'n' sorcery going on as well. A few years later, Charles L. Grant used that term "dark fantasy" to describe his own stories and novels of subtle modern unease, but I prefer "quiet horror" for his brand of fiction. I say all this to simply state I'm not a fan of this kind of dark fantasy, and feel I don't quite have the critical acumen to judge dark fantasy. I tend to skim stories in that vein.

In Series VII, four stories fit this subgenre: "Amma" by Charles Saunders (above), "The Secret" by Jack Vance, "Divers Hands" by Darrell Schweitzer, and "Nemesis Place" by David Drake. I was unfamiliar with Saunders but liked well enough his West African griot's tale of a woman's unlikely secret identity; its comfortable switch-up ending evokes fables we first heard in childhood. Vance's story of Pacific islanders who know, unconsciously, that to leave their home is to encounter a strange wide world the knowledge of which may not be welcome. Again, something like a child's tale. 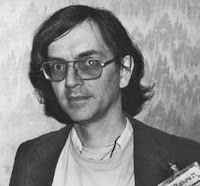 Schweitzer (above), long a critic and editor of genre fiction, contributes a longish work never before published. Knights, horses, swords, chainmail, maidens... no thanks. But Schweitzer writes strong prose, knows his way around violence and creeping dread, so I think "Divers Hands" will appeal greatly to those whose appreciation of such works is greater than mine. Drake's "Nemesis Place" contains the phrase "trader in spices" and that pretty much was quits for me, though I read the last paragraph and it seemed pretty bloody, so cool I guess.

Anyway, on to the real horrors.

An early work from one of the 1980s greats, Dennis Etchison, "The Pitch" is a pitch-black bit of unexpected vengeance by a kitchen cutlery salesman. Ouch. Etchison is a master of the modern convenience and its impact on our lives. "The Night of the Tiger" is a very minor work from Stephen King; it appeared in neither of his classic collections Night Shift and Skeleton Crew. King's authorial voice is strong, and the circus setting is convincing, but the final twist is rote. Now I enjoyed the relaxed charm of Manly Wade Wellman's tale of a lovely vampire lady, "Chastel." This dude hated it though. Ah well. 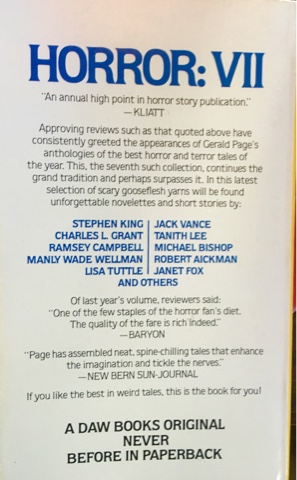 Autumnal sadness/grief/heartbreak/terror of Charles L. Grant's "Hear Me Now, Sweet Abbey Rose" is bittersweet. A sensitive family man protects his daughters against some drunken louts but the final horror is almost mean-spirited. One of Grant's finest. Another familiar name in any late '70s/1980s horror anthology is Ramsey Campbell, and his offering "Heading Home" may elicit a groan thanks to its pun, but it works as horror and as comedy. TMHF favorite Lisa Tuttle's "In the Arcade" has a woman lost in a lonely nightmare, looking back over a shameful racial history. It didn't appear in her amazing collection A Nest of Nightmares; not sure why, maybe it's the slight SF twist.

Ah, I forgot that the fine "Sleeping Tiger" from Tanith Lee (above) is also dark fantasy: a Brave Prince named Sky Tiger happens upon two lovelies in the forest named Orchid Moon and Lotus Moon. They bring him to a tower and perhaps promise paradise; Venerable Priest appears and puts the kibosh on that. That final twist is impolitic. "Intimately, with Rain" is Janet Fox's modern fable of ancient guilt. Love the ending for this one, even if I've read and seen it elsewhere. 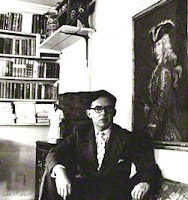 The two final tales are, I feel, the best of the lot: superb in style and sensibility, "Collaborating" by Michael Bishop and "Marriage" by Robert Aickman (above) offer the very best in genre fiction. The former is a kind of Cronenbergian medical horror story written with taste and steely-eyed insight (We gave them stereophonic sweet nothings and the nightmares they couldn't have by themselves); I don't want to spoil it for first-time readers. The latter is another of Aickman's precisely-penned tales of daily English life and the traps it holds in store for those who attempt to go against it (He glared brazenly at the universe). Fantastic works, and two of the best short stories I've read this year.

Editor Gerald W. Page was involved with Year's Best Horror Stories for several years. In his intro he rightly states "You  never know where a good imaginative story will take you, whether it's science fiction, fantasy or horror..." and notes that good writing is just good writing. That's true, certainly, but good writing isn't my only criteria; I find I prefer my horror to be generally modern. But that's between me and me, and I think many other readers will find Series VII a worthwhile addition to their shelves of horror fiction... 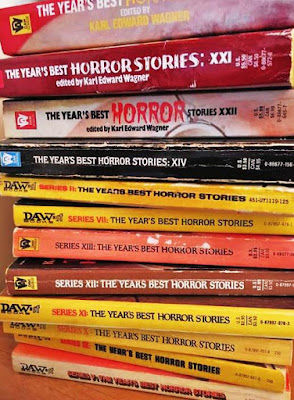 Posted by toomuchhorrorfiction at 9:25 AM

Excellent breakdown! It sounds like a book I'll have to get my hands on. I'm not much of a fan of the fantasy stuff (dragons, knights, etc) although I used to read it much more often. Now I'm almost exclusively demons, ghosts, and murders kind of stories. :)

Yeah, at this point that's one of a very, very, very small handful of unreprinted King stories. Another is "The Reploids" from Night Visions 5 (aka Dark Visions, aka The Skin Trade), in that case I believe because the story very closely resembles the early pages of Philip K. Dick's FLOW MY TEARS, THE POLICEMAN SAID.

The dark fantasy eventually disappears, though not until Wagner takes over for awhile as editor. One of the oddities of Page's years (and was there an editor before Page? I think so.) was the inclusion of one or two previously unpublished stories in a few volumes.

I used to pick these up infrequently, but became discouraged with the amount of "false horror" inside. I am not a fan of the fantasy stuff either.

I am an Aickman nut though and wil have to check my 2 vol. Collected Stories set from Tartarus to see if that story is in their since the title is not ringing a bell- and I thought I knew all of them by heart! (the titles I mean, not the stories! lol)

Was lucky enough to pick up the entire run, in near-mint condition, a few years ago. Also not a fan of fantasy, but overall this is a great series.

Always love these books, even if the quality did vary. The first couple of them warped me pretty good as a kid.

And the "dark fantasy" thing... wow, did I hate Charles L. Grant for pushing that stupid term back in the day. I wouldn't have minded it so much if he just applied it to his own stuff (which, honestly, I've seldom liked -- not everything has to be splatterpunk, but Charlie wasn't always "quiet," he was often flat-out timid!), but at the time he was trying to get ALL of horror re-branded to "dark fantasy" and would try to insist on everybody using that term, and if they didn't he'd brand 'em outcast. And "fantasy" is one genre I just can't stomach. I didn't want my genre keeping company with unicorns and dragons. Grant's stuff, "Come With Me And Hug My Teddy Bear, Dear Suzy" or whatever (he came up with some really silly titles), may have been "dark fantasy," because a lot of it sure wasn't horror, but he was so pushy with trying to stick that label to King and everybody else. So, I really resented him for that...

I've never had a problem with fantasy per se, and Karl Edward Wagner's Kane s&s stories appeared at least once, to good effect, in the Page volumes of the annual...they certainly verged on horror well enough.

Page, like Lin Carter in his DAW fantasy Best of the Year, apparently decided that the relative lack of horror-fiction magazines at the time he was editing was a good reason to include new stories in his volumes...again, I didn't mind too much, even when, as with at least one H. Warner Munn adventure story in the "Man in the Iron Mask" mode, the story was barely arguably horror. Davis's US/DAW volumes were somewhat oddly reprinted from his UK series, which had a volume in the UK that wasn't reprinted in the US, when Page took over the DAW series.

Meanwhile, the Etchison was a brilliant suspense story, not actually horror by my lights. AOK by me in its inclusion as well. King had two awful stories in F&SF in 1978, but at least Page took the less bad one...he'd plucked the rather good "Children of the Corn" (not nearly as bad as the film) for an earlier volume...Terry Carr, in his fantasy annuals, would instead seem to go directly for the worst King stories he could find.

I recently straightened out the way the two YEAR'S BEST HORROR STORIES series went, in the UK and the US...in this WIKIPEDIA article...
https://en.wikipedia.org/wiki/The_Year%27s_Best_Horror_Stories

It's always fascinating to me to think of Stephen King stories out there that didn't get republished.