Interview with the Vampire by Anne Rice (1976): Whining for Centuries 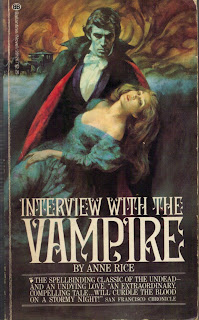 Anne Rice gets blamed for the whole "emo"-ing of the vampire in the horror genre today but you'd never know it from the cover art of this amazing 1979 reprint of the Ballantine paperback edition of Interview with the Vampire. That is some classic Gothic Dracula-style action going on. I've got too many new books piling up these days to reread it, but damn if I don't love this cover! I didn't even know this edition existed until a couple months ago.

It's been 20 years since I read Interview but I can still recall the self-absorption, the self-dramatization, the self-victimization, of Louis, the titular vampire, as he recounts his "life" story. No wonder young adults love this stuff; I once heard it described as "Catcher in the Rye for the Goth crowd." Yet the art has virtually nothing - and I mean nothing - to do with the book itself; in fact, one of the points of Interview was that it shed the whole opera-cape-and-tuxedo look of Lugosi and Lee. Rice's vampires didn't go after swooning ladies in nightgowns; they fed on criminals and even family members, as I recall. However it's certainly a striking piece of Gothic horror art, by recently deceased artist H. Tom Hall (uncredited). 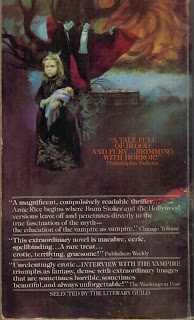 And on the back cover we see, what? Ejaculatory blurbs, and two vampires in Dracula capes (Louis and Lestat, one presumes), one semaphoring like he's signaling in an airplane. Claudia is there, so maybe somebody told the artist about the poor little girl who's damned to be a vampire. Truthfully I only liked the first few Vampire Chronicles, as they were unlike anything else in the horror fiction field; however in the intervening years I've glanced back at parts of them and found her prose overheated, overwrought, and in some places, just plain bad. When Tale of the Body Thief came out in '92 I bought it straightaway but only got about a chapter or two in when I simply said, "Done. This is just awful." Never looked back either, until now.

There are other '70s paperbacks of Rice's first novel with cool cover art that I need to track down. I've seen this edition going for some fair cash on eBay but I was able to buy it recently for $2. It has that comforting old-book smell that hints of age and imagination and escape, and it's not too beaten up. Another vintage paperback coup for Too Much Horror Fiction!
Posted by Will Errickson at 6:20 AM

I always thought Rice should have finished the series with "Queen of The Damned", called it a trilogy, and left it there. Everything after that just gets worse. All her writing sins just multiply and enlarge.

Hey, I just found a new cover, too! This one OS very different.

I own this edition and was wondering if it was worth anything these days? I tried searching the internet and the only place I found it was here! Any information would be helpful. Thanks!

I would have preferred the story stayed a Trilogy ending with Queen of the Damned; but I did enjoy The Body Thief a lot. Memnoch had some interesting ideas and could have been a decent end to the story too.

Everything from The Vampire Armand was so hit and miss though, almost reading like "Fan Fiction"; a little over indulgent in some parts. Read them all though.

Haven't read "Prince Lestat" yet though... need to get my hands on that.